Tayuman street and parts of Oroquieta street are located within Santa Cruz district in Manila. This earn the moniker as ” Religious Hub”  for Catholic religious items ranging from from rosaries, bible, estampitas, novena booklet, religious statues . This is a short walk from LRT line 1 Tayuman station ( just a few meters away).

For several decades, These streets near Espiritu Santo Parish Church are the best places to buy cheap Catholic religious statues. There are about a dozen religious stores which sells different kinds of religious items.

The most popular religious store is SVD Catholic Trade which is just along the intersection of Tayuman and Oroquieta street. The building is a circa 1960’s style with brise-soleil windows . Local parishes would buy communion host ( sacramental bread), sacramental wines , priest vestments among other items. Department of Tourism had accredited this religious store.

Santo Niño made from cast fiber resin with wooden base

I accompanied my friend few days ago who have a personal devotion to Santo Niño ( maybe a Santo Niño collector) and after a brief stop in a religious store.  He was able to buy a small santo niño for a discount. Popular religious statues includes child jesus, virgin mary, holy family and black nazarene.

The cheapest religious statues which is made from fiber resin and maybe imported ones from China cost about Php 40 each about 4 to 6 inches. According to the vendor, They can give us Php 35 each if we will buy at least 6 different items. 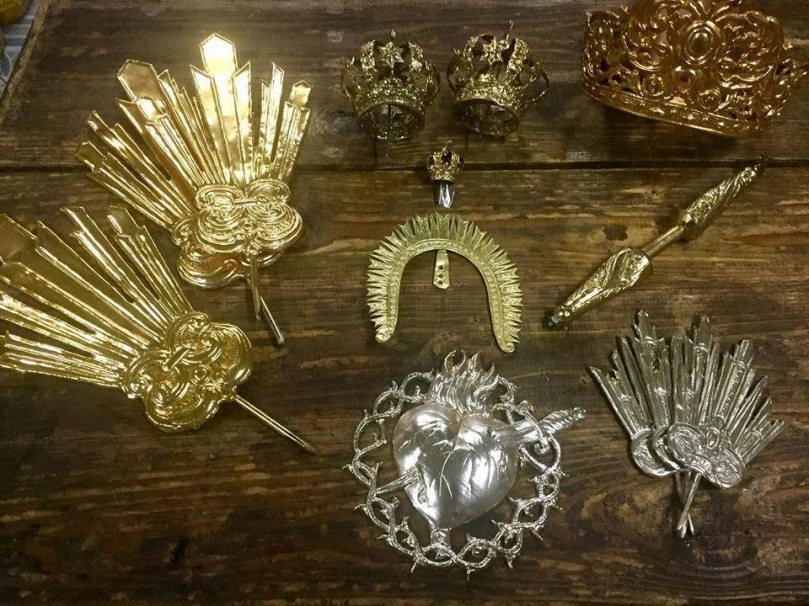 I was also amazed that in some instances, religious dress may cost several thousands of pesos and may be worth more than the wooden statues, not to mention the aureole, crown, septer and accessories. They are normally handled down from one generation to another.

Religious statues made from cast fiber resin and plastics are the cheapest priced item . They are priced depending on the material, craftsmanship, details and size. The bigger the statues. The more expensive it becomes.  Religious statues made from fiber resin and plastics are more preferred by the general public, since they are cheap , lightweight and easy to transport.

The wooden religious statues cost between Php 2,000 to Php 2,500 for a small one about 12 to 14 inches. Usually they are made from batikuling , santol, langka or other softwood tree varieties.

Batikuling wood or scientifically known as Litsea reticulata, Litsea perottetii  or Litsea leytensis seems to be the most preferred wood material for religious statues. For religious ( santo) collector . They would prefer wood, which could last for generations.

There are also some re-sellers of these items . Some of the stores have customization services for those who do not like the ready-made religious statues. I think they ordered those statues from Pampanga or Laguna provinces. Old folks would recount that several decades ago, that there were good santo carvers ( santoreros)  from Santa Cruz, Quiapo and even in Tondo districts.

One of my friend who would roam around different religious stores within Manila would dispute that there are some places which would sell cheaper santos compared to Tayuman area. Since their rents have risen within the district. Some of the buyers would prefer the ” suki” patron system.  They would built a long lasting relationship between buyers and sellers.

There are some religious stores which used to sell religious statues with carved ivory head and hands. During our brief stop over, We have not seen santos with ivory heads and hands displayed at their stalls. Maybe some of them stopped or went into underground trading.

We were able to get some contacts and as i have posted, my friend bought some Santo Niño statues for a little discount and a couple of religious statues made from fiber resin. One will be donated to a local chapel somewhere in Caloocan.

A religious store was having a mid-year sale and we were quite lucky to have bought 1 religious statue. Overall, His total bills reached around Php 10,000 and took a side trip eating at a local eatery ( carinderia ) near SM San Lazaro.

I have learned a lot by joining my friend in his short search of religious statues within Tayuman and Oroquieta streets.

Here is a short list of the religious stores within Tayuman and Oroquieta street.

Made to Order, Repair and Repaint