Mr. Normal Fulgencio ( chairman of the board of PHLPOST) said during the launching  that the Catriona Gray stamps is a way of recognizing her after winning the Miss Universe title.

One of the stamps shows her first official photo as the new queen of the universe with face value of Php 12 by 40 pieces per sheet while the Php 55 souvenir sheet shows the first walk after the announcement.

Aside from the official photos provided by Miss Universe organization, The logo of the organization is also prominently featured on both stamps and first day covers.

Ms. Catriona Gray recounted that she would also collect stamps from different countries and send letters to her friends. 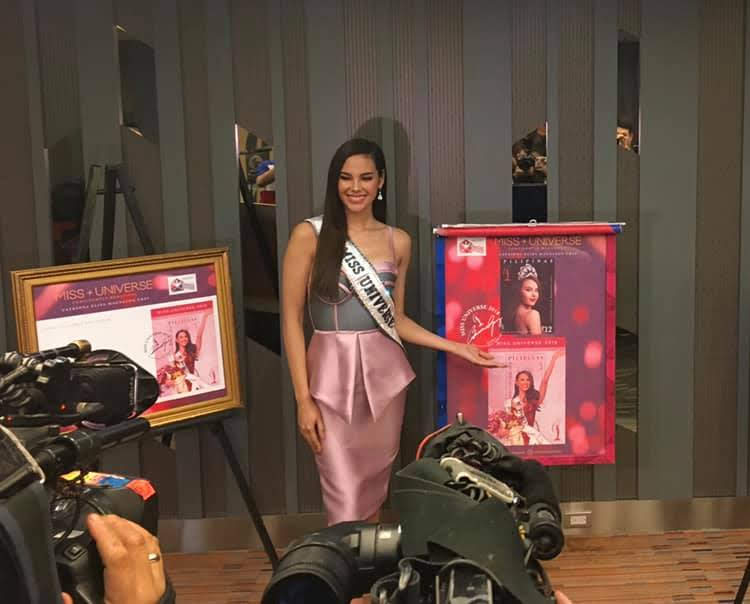 The ceremonial autograph signing and presentation was held at the Novotel just hours before her victory parade held within Araneta Center.

“This momentous occasion is an opportunity for us to recognize her in raising the Philippine flag, and championing Filipino pride in the global stage,” Fulgencio said.

“Indeed you have made us proud. Your victory is a testament to the faith and resiliency of the Filipinos,” he added.

Along with the two stamps, There were first day covers which will be release to the general public by February 27, 2019 ( Wednesday ). These special stamps and fdc can be purchase  at the Manila Central Post office, Liwasang Bonifacio, Ermita, Manila.