I have visited a collector friend after spending almost an entire day within FEU campus. My friend lives near the border of Manila and Quezon city. Selling a few mid-century items as part time trader. They are selling their old ancestral house and negotiation is still underway.

The buyer most probably will demolish the ancestral house and built a new one. The area is located on higher ground near University belt, hospital, market places which makes it attractive to prospective buyer. a mid-century house with marston mat gate within the neighborhood

The three story house was built during the commonwealth era. It had a lot area of 249 square meters. Its perimeter fence had Marston Mat, properly called pierced (or perforated) steel planking (PSP). This was first manufactured in the United States in the late 1930’s and was used extensively until the early 1960’s in the country. Marston Mat was extensively used during the last world war by army engineers and seabees (construction battalions) to build runways and other readily usable surfaces over all kinds of terrain. 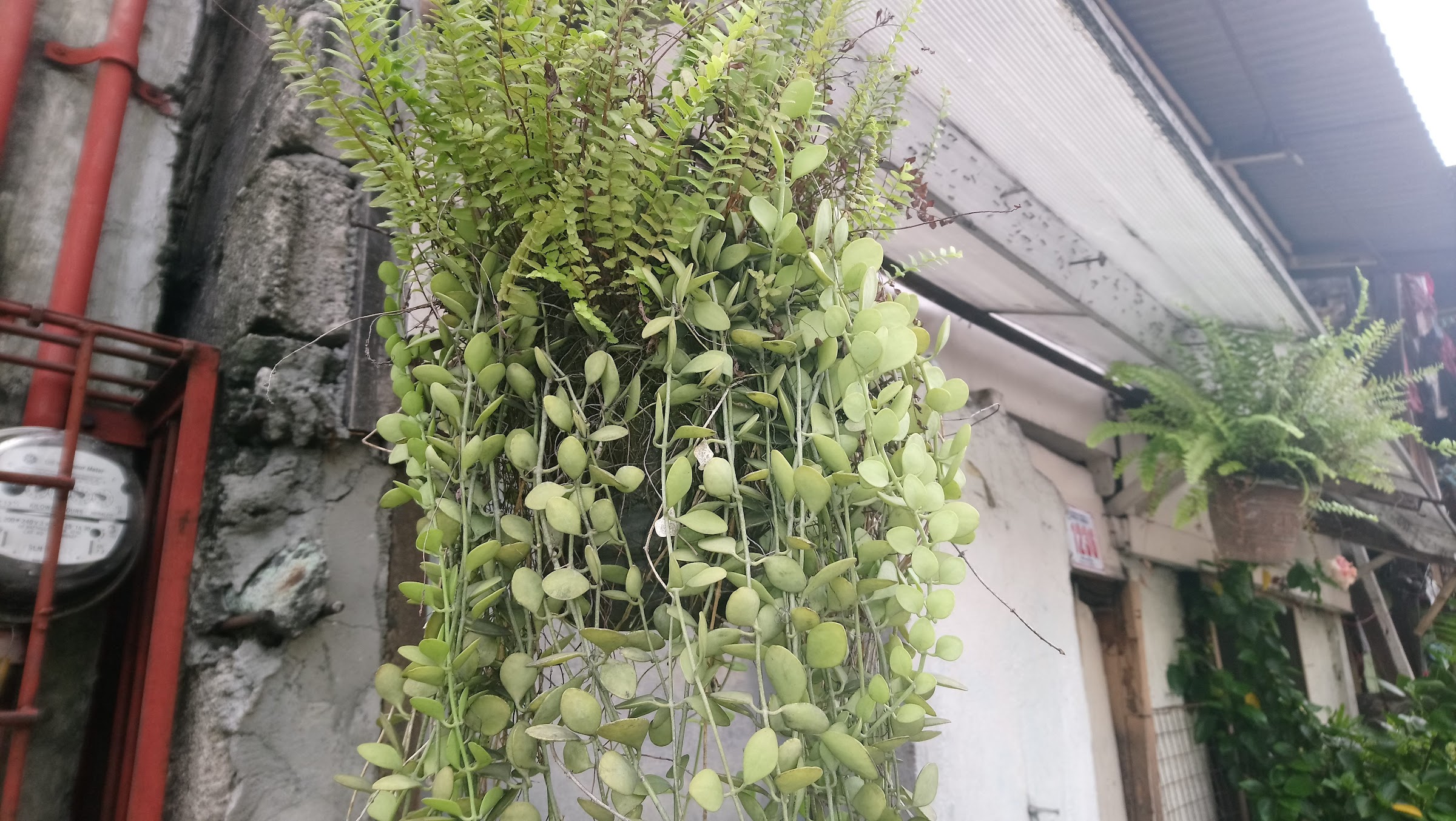 It was which was quite popular fencing material after the second world war in the country. Some of the martson mat were also used as gates, partition in large properties, fencing material and even covers in manholes. 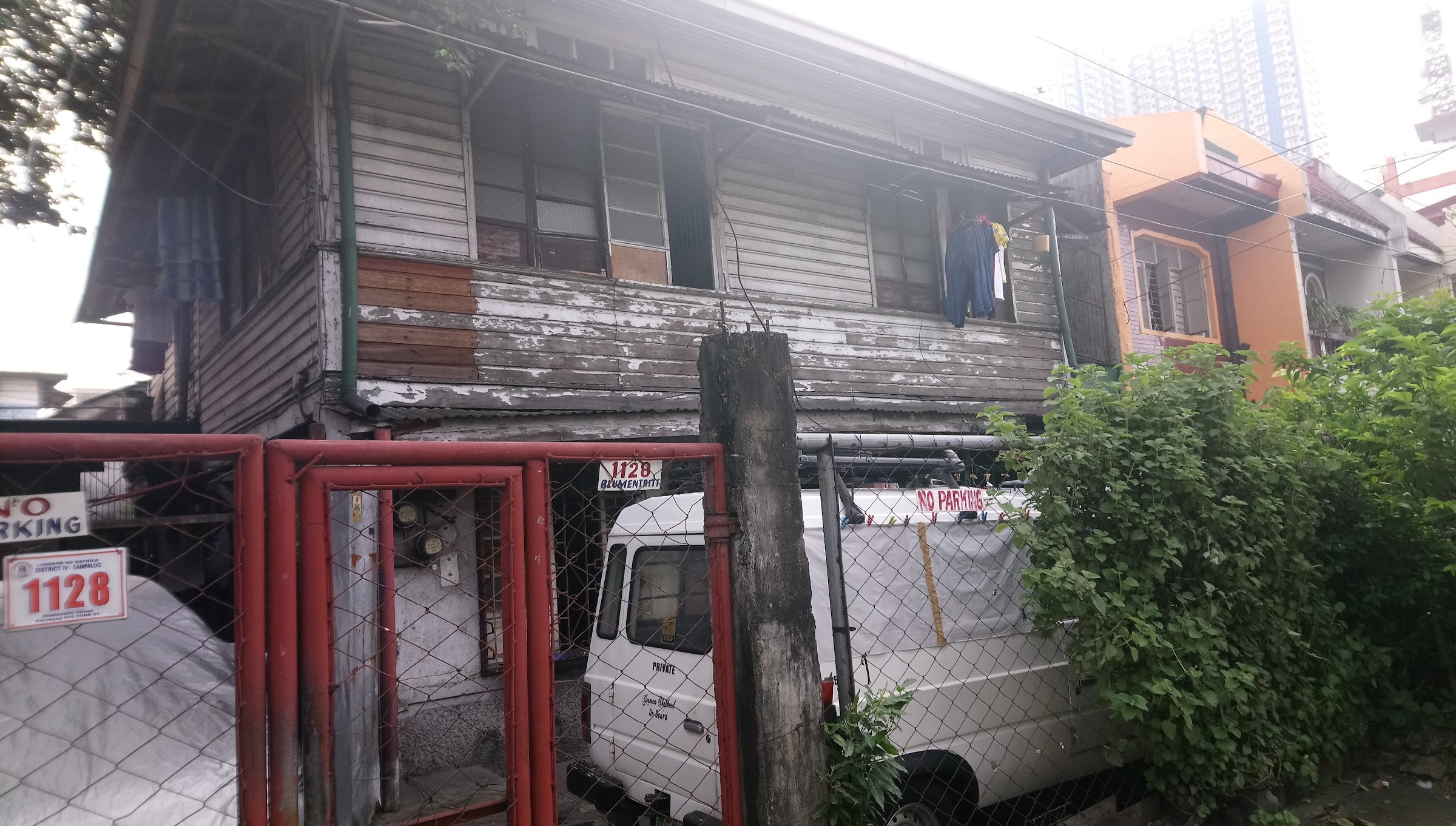 There were also several mid-century houses and apartments within the street. However most of the houses were not properly maintained. 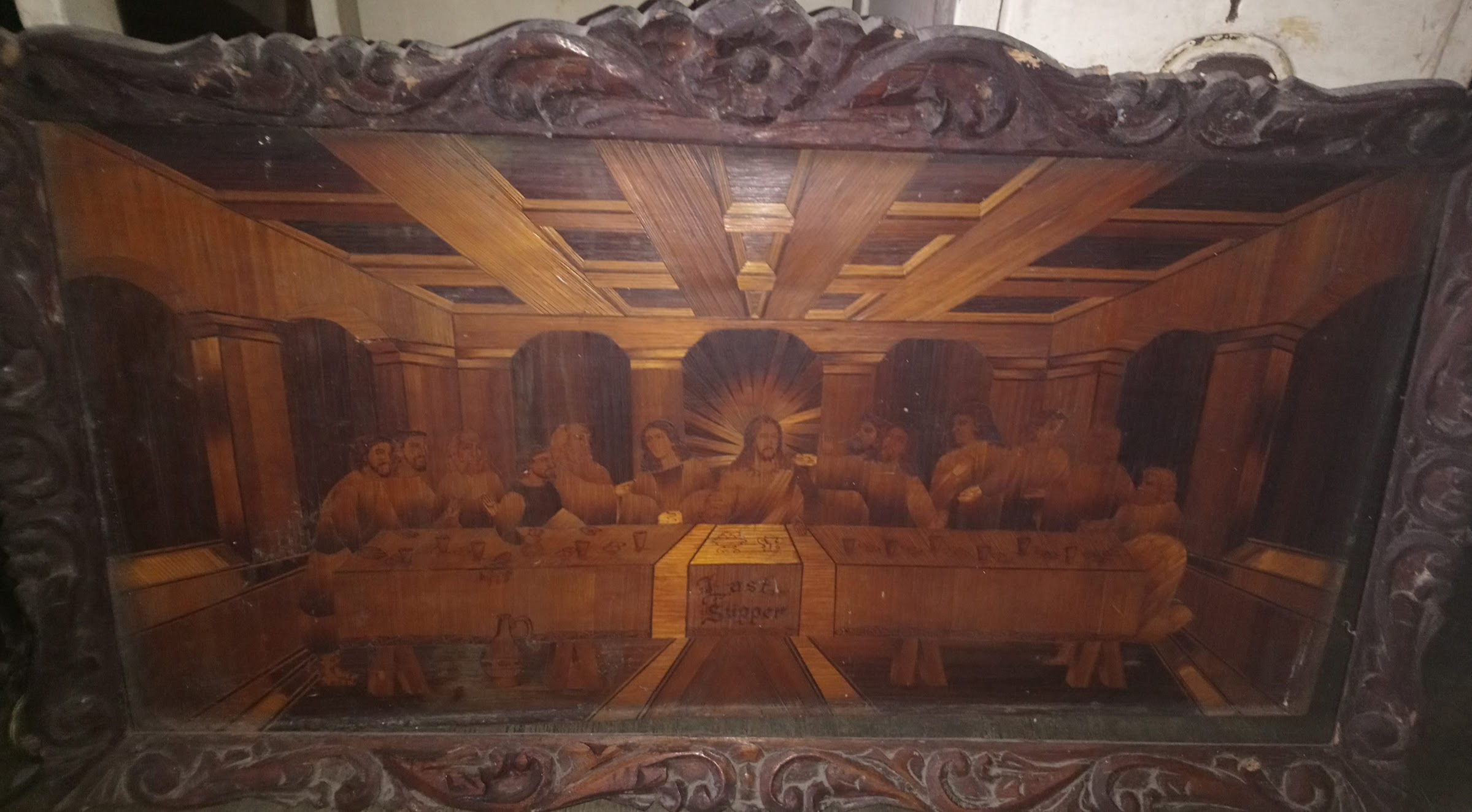 Last Supper in large wood frame- This is a last supper made from several pieces of wood glued together. This use to be commonly sold in the souvenir market from the late 1930’s to the mid-1970’s. The first ones were probably made by prisoners from the Bilibid prison and quickly caught the fancy among art collectors. 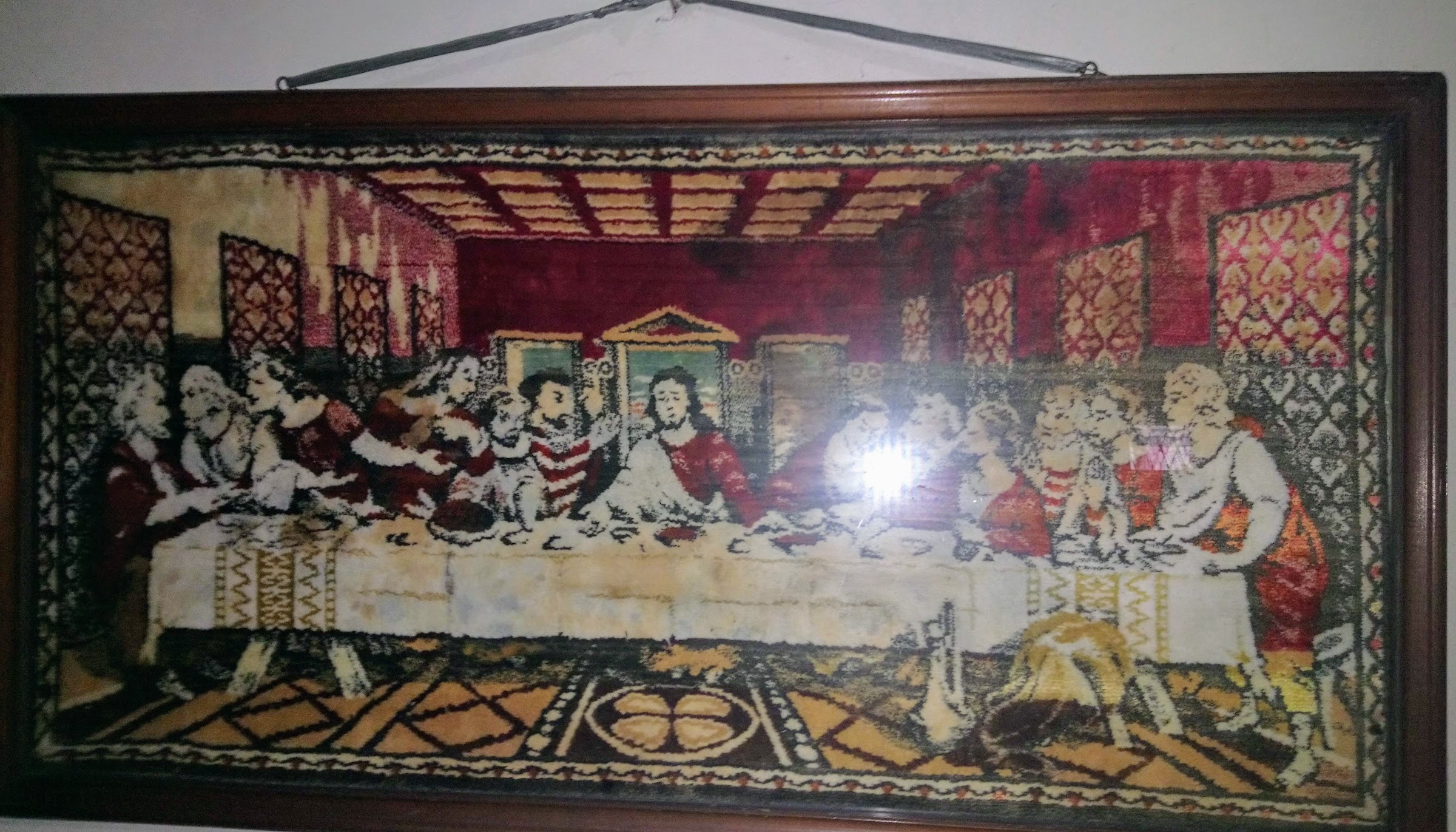 Last Supper – Another masterpiece tapestry. This became common piece in almost all the Catholic homes all over the country. These are normally hung in dining area or sala.

Christ the King seated on his throne while raising his right hand and with the left showing his sacred heart. Made from eskayola/ escayola or plaster of paris.  This was probably made in the late 1970’s or 1980’s which had a customized urna ( religious container) mounted on the wall.

Christ the King seated- This is the larger piece seated Christ from their family collection. Made from eskayola /escayola or plaster of paris.  The hands are made from carved wood. This can probably dates back in the mid 1970’s to early 1980’s. 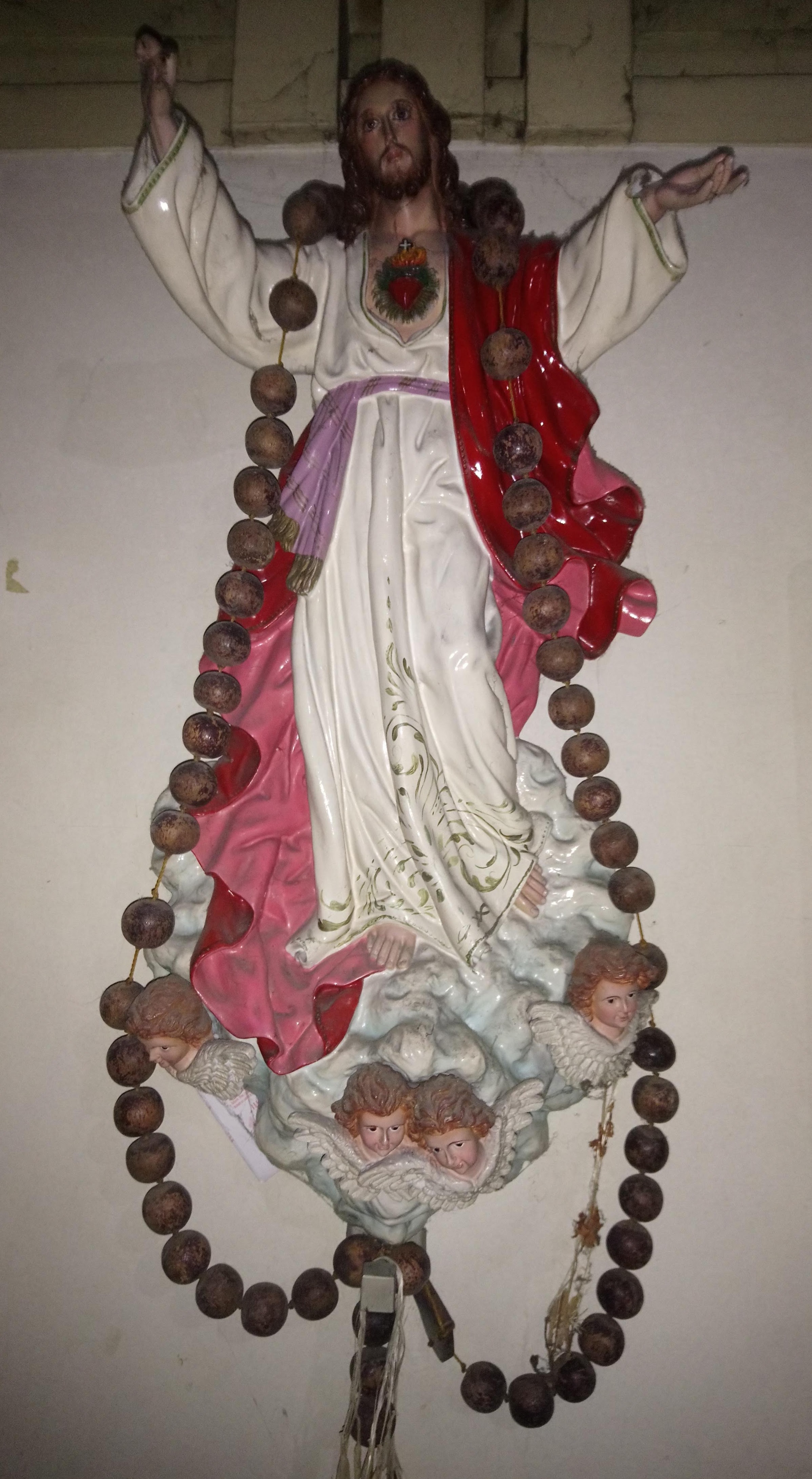 Risen Christ is made from wood and mounted in one corner of the living room. It was bought several decades ago. 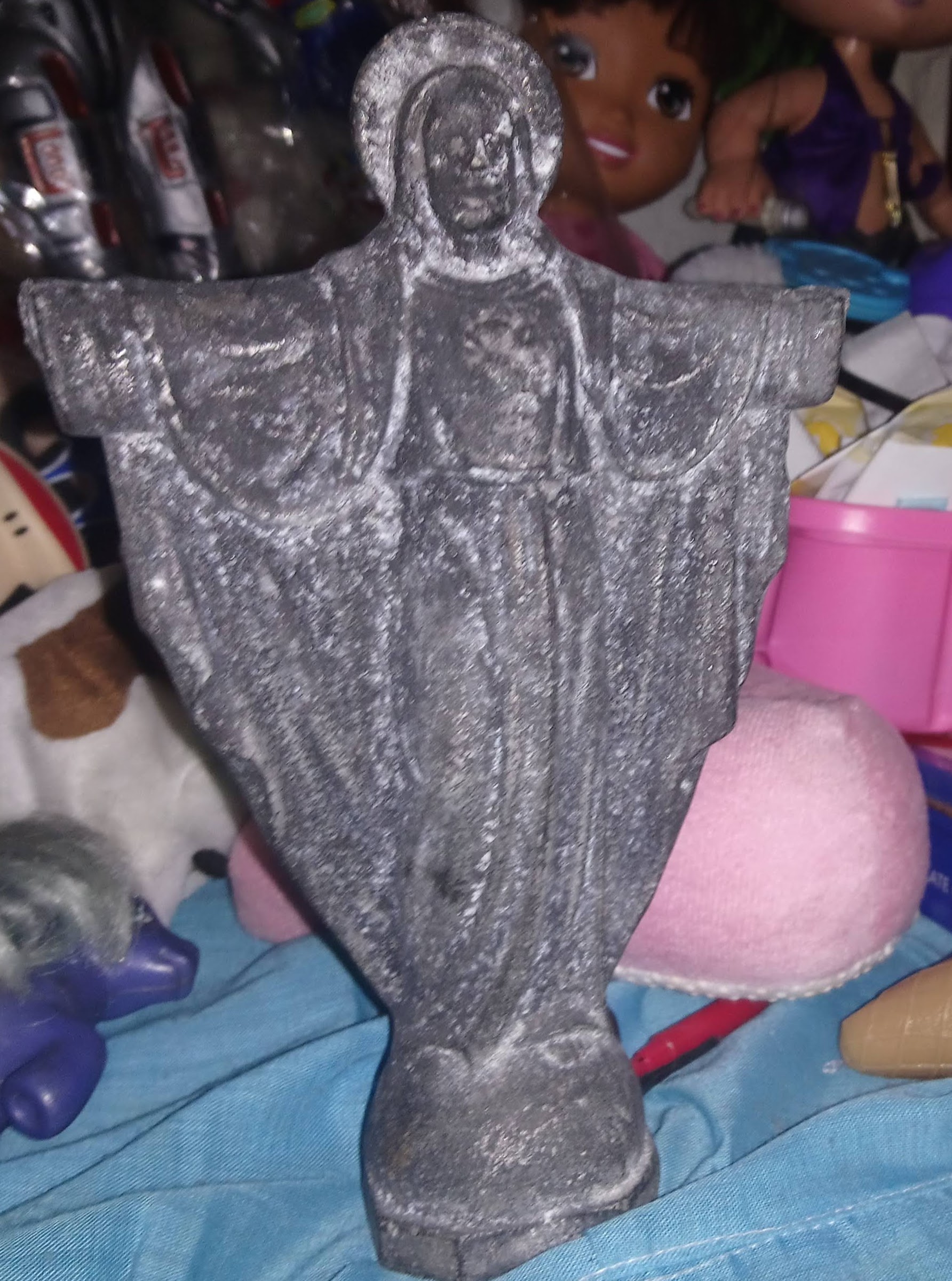 This is Risen Christ which was rescued from a fire. The hands were lost, the risen Christ was made from iron and zinc. They still have some mid-century statues and other items.