Philippines is an archipelago with hundreds of creeks, stream, lakes, river and water system. Water plants are plenty and the country is rich in biodiversity. However some of the commonly grown water plants are introduced to the country. 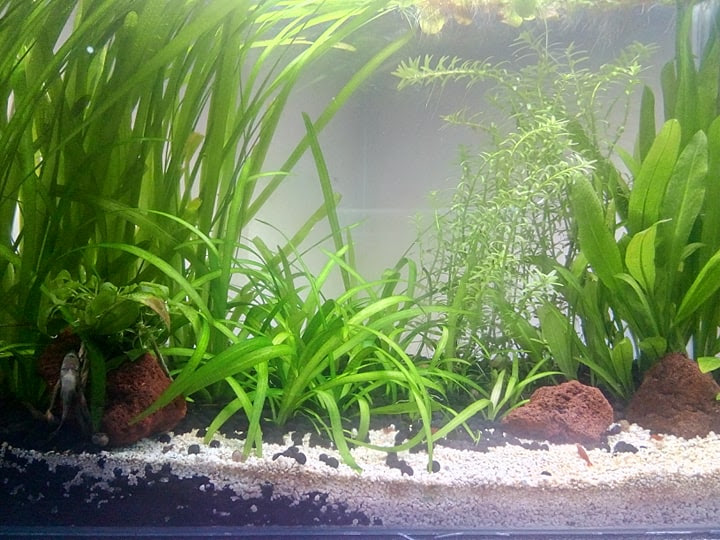 They are classified into Emergent, Submerged, Floating-leaved, Free-floating. Our team made a short list of 25 common water plants grown or found in semi-naturalized state.

We eliminated Ipomea aquatica or Kangkong / Kangkung, since it is used as food. Better  post in another topic. 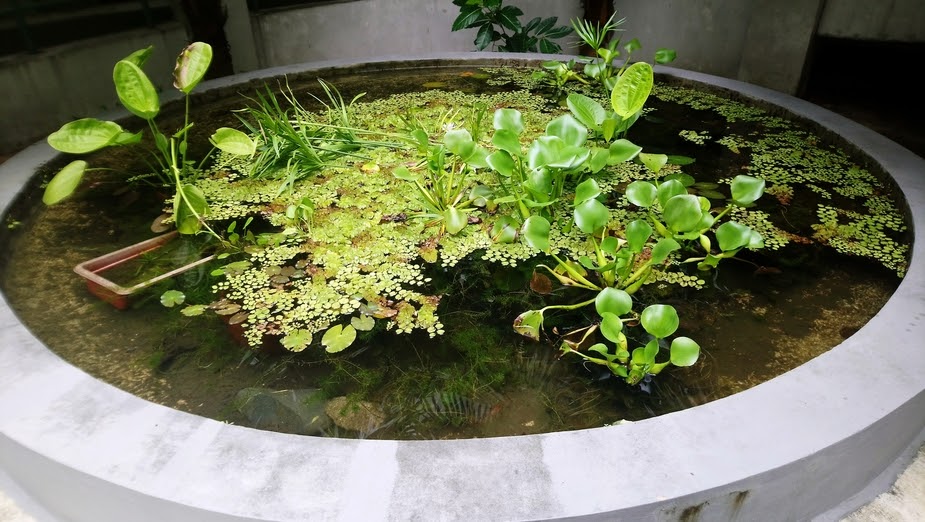 25.) Ludwigia sedoides – commonly called Mosaic plant, False Loosestrife. This water plant originates from Brazil, Venezuela. This had become naturalized in many tropical, sub-tropical and even temperate countries.This blooms during June to August which coincide with the rainy season, But this may also bloom during the dry season. Some sell this from Php 50.00 small plant to as much as Php 200 in some online sites.

24.) Myriophyllum aquaticum commonly called parrot’s-feather and parrot feather watermilfoil. Parrot feather gets its name from its feather-like leaves that are arranged around the stem in whorls of four to six. This water plant originally is native of South America and quickly spread via the tropical aquarium trade in North America and elsewhere.

In some countries, Like the United Kingdom, Australia, Japan, Southern United States.  parrot’s-feather can quickly clogged waterways and ponds. The growth can block sunlight and cause native plants to die because of light deficiency. The organisms that feed on the native plants can die off due to starvation.

This is also commonly sold in Cartimar and in many aquarium pet stores all over the country. 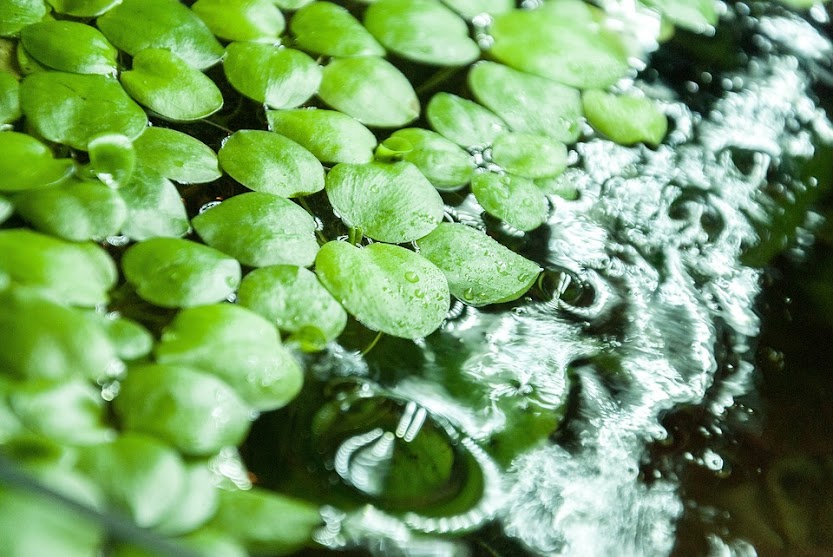 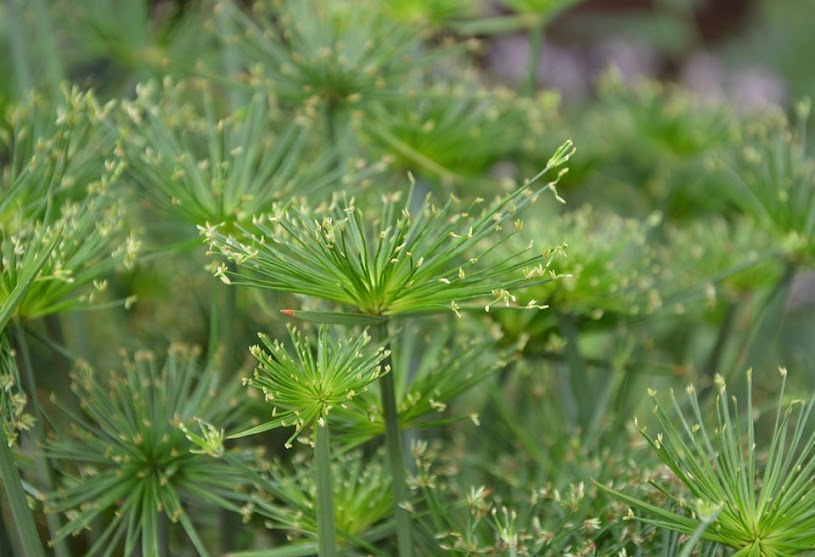 22.) Cyperus alternifolius, common names are umbrella papyrus, umbrella sedge or umbrella palm,Indian matting plant. This was native to Madagascar in Africa but quickly spread in many parts of the world.

This is commonly seen in rice paddies, pond, creeks,irrigation canals throughout the country. The umbrella palm is sought after for its impressive height that can grow to six feet. It creates a soft backdrop for shorter aquatic plants, but it can grow notoriously fast and spread if not put in a container.

21.) Eleocharis acicularis is a species of spikeedge known by the common names needle spikerush and least spikerush. This is common in most aquarium stores in Cartimar and pet stores.

20.) Echinodorus grandiflorus Commonly called spade-leaf sword, creeping burhead, Amazon spade leaf. There were at least 40 known species of this genus and quite common in aquarium trade all over the world.

It is native to Brazil, Paraguay, Uruguay, Argentina,Venezuela and Florida in the United States of America.

This plant species is quite common is rice paddies, water irrigation ditches, ponds, lagoon and garden center. Immersed plants readily produce flowers and seeds but it can be grown submersed as well.

Small plants are being sold between Php 25.00 to Php 400 depending on the size. Variegated plants are also sold for a little bit higher compared to the ordinary green leaf types.

19.) Lemma minor commonly called duckweed, or lesser duckweed. Lemna minor is the common duckweed works well as a water purifier. It can help control the algae.

Some of the economic importance of Lemma minor is used as animal fodder, bioremediator, for wastewater nutrient recovery, and other applications.  This is common in rice paddy fields, ponds, aquarium trade and lakes. It is also given as a feed to ducks, chicken and goose.

It is found in many areas of the world and have naturalized in Australia and South America. In aquarium trade, it is sold between Php 5.00 for a small cup to as much as Php 50.00 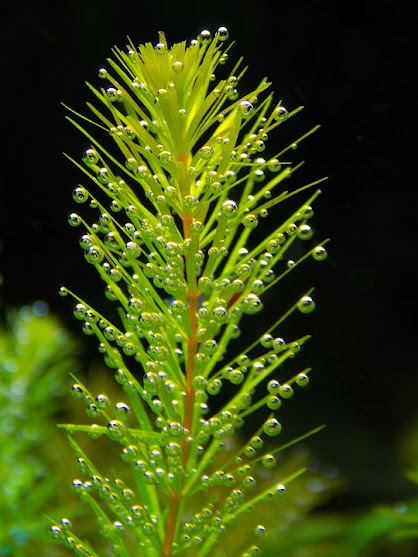 18.) Ceratophyllum submersum and Ceratophyllum demersum commonly known as the soft hornwort ,tropical hornwort, coontail or coon’s tail . This seems to have naturalized in almost all water system in the country.

Sometimes they are so common that backyard hobbyist would give them away as freebies. They are sold between Php 10.00 to Php 50.00 depending on size in online sites. 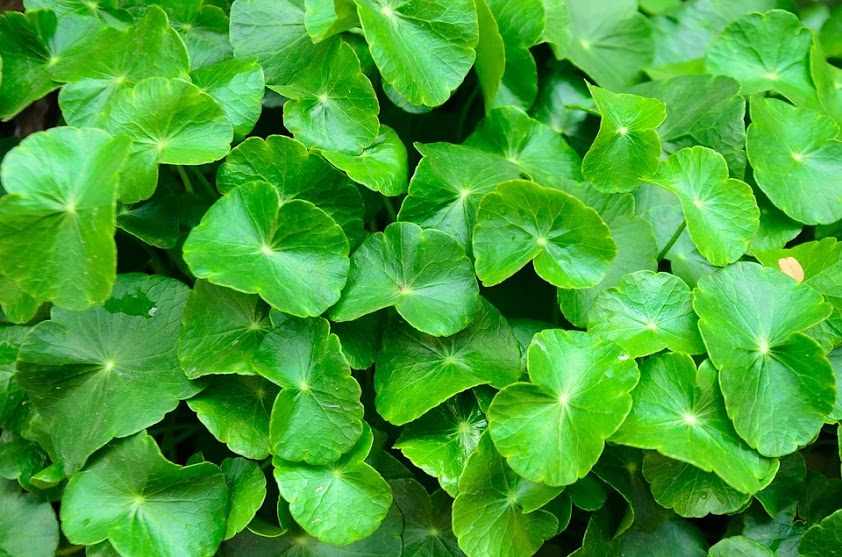 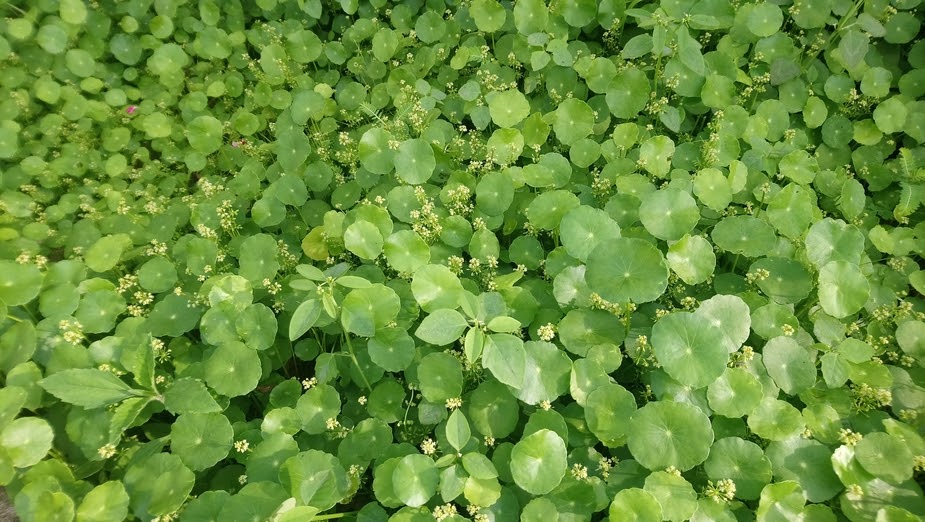 Hydrocotyle vulgaris blooming in a garden plot within Institute of Biology, University of the Philippines, Diliman, Quezon City.

Sometimes people would mistake this as gotu kola (Centella asiatica), since the leaves are almost the same.  They are sold between Php 20.00 to Php 50.00 in online sites depending on how big the plant.

16.) Azolla pinnata is a species of aquatic fern known by several common names, including mosquito fern, feathered mosquito fern and water velvet. This is common in rice fields and waterways.

15.) Cabomba carolina – This is originally found as an aquatic perennial herbaceous plant native to North and South America. However human migration and introduction spread this water plant in many parts of the world. To some extent, invasive species in Australia, Europe and many parts of tropical, sub-tropical area, temperate areas.

This water plant is found in Negros, Panay islands in the Visayas and Southwestern part of Luzon. This is also found in the Bicol region. Some of the problems encountered by local aquarium hobbyists is the over harvesting, water pollution of this species.

12.) Rotala rotundifolia is found in many South-East Asian countries has long, thin leaves and 15-30 long stems, 2-3 cm wide including the leaves. Unlike other Rotala species it is relatively undemanding, although it needs good light to produce red leaves.

11.) Salvinia it is a species of floating fern and is related to the other water ferns, including the mosquito fern Azolla. There were about 12 species are recognized with at least 3 are known to be hybrids. This is commonly seen in ponds, rice fields, water ways, pond, irrigation canals and popular in aquarium trade.

10.) Vallisneria genus was named after an Italian (Antonio Vallisner who lived from  May 3, 1661 – Padua to January 18, 1730) He was an Italian medical scientist, physician and naturalist.

The plant is widely distributed from Asia, Africa, Europe and North America while it had become invasive weed in many fresh water pond elsewhere. There were at least 15 known species .

9.) Microsorum pteropus or Leptochilus pteropus commonly called Java fern since the original specimen plants were from Java. However this is a more widespread species that is found in Thailand, Malaysia, India, southern China,Indo-China, Indonesia and the Philippines. 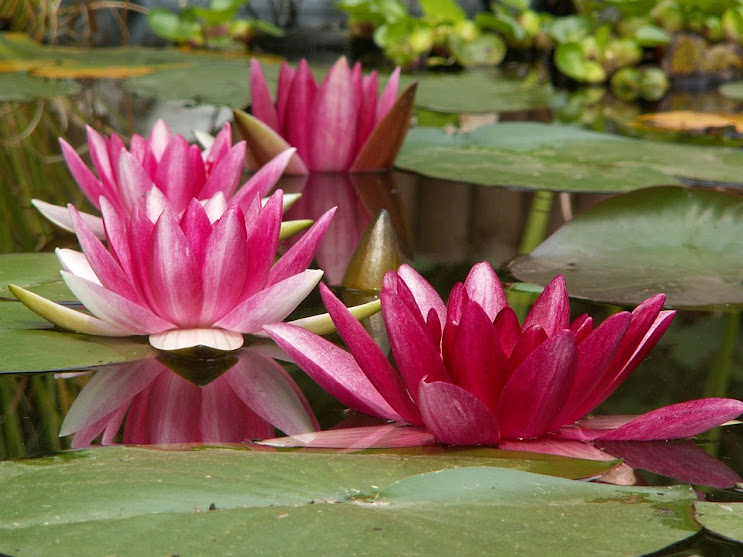 8.) Nymphaeaceae or water lily, sometimes incorrectly called lotus. This is common in many pond, lakes or irrigation canals in the country.

There are native water lilies which strives in many areas of the country. Hybrids are also grown in some farms in Rizal, Quezon, Laguna, Bicol, Cebu,Davao, Cotabato, Zamboanga.

7.) Anubias is found mostly in Africa and is semi-aquatic to almost aquatic. The genus was was first described in 1857 by Heinrich Wilhelm Schott. He was an Austrian botanist. There were at least a dozen or so species. Some rare species can command handsome price tags.

6.) Hydrilla verticillata commonly called water thyme. This is found in many old world countries and had naturalized in many areas of sub-tropical and tropical regions of the world.

The plant is closely related to Egeria densa and Elodea canadensis. This is one of the most common live plant being sold in aquarium trade.

5.) Hygrophila difformis, commonly known as water wisteria is found in many parts of Asia.

This species is common in tropical, sub-tropical and many parts of the world. The plant is known for its anti-ageing properties. Common in aquarium and water plants in garden centers. There were at least 82 species of Ludwigia spread in many places of the world.

3.) Equisetum hyemale – Commonly called horsetail, snake grass, puzzle grass. This is found in many parts of the world. Commonly sold in Mindanao Garden Center , Quezon Memorial Plant Center,Farmer’s- Araneta Plant Center, Tabang, Guiguinto and in many areas all over the country. 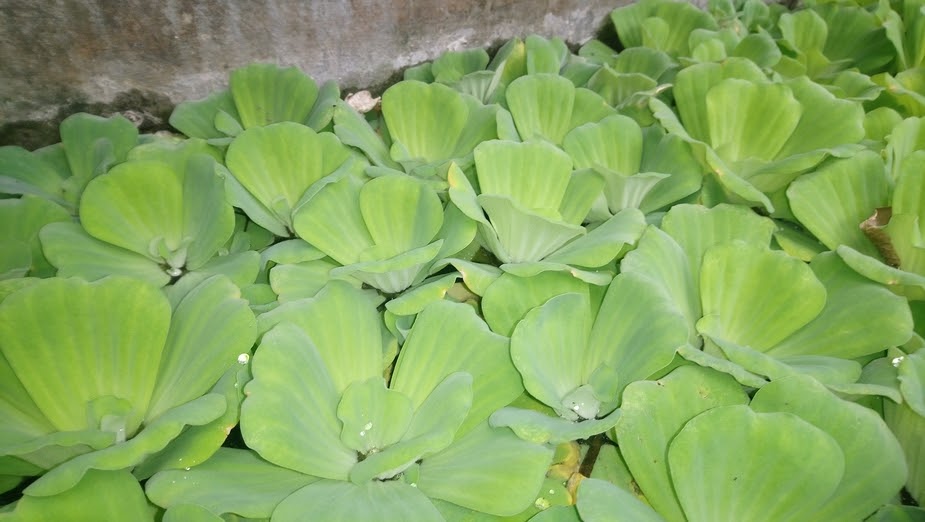 In some countries like India ( famine food), Southern parts of China and Africa. Young leaves are usually boiled to remove the acridity from calcium oxalate crystals.

The district of Quiapo in downtown Manila and the town of Cuyapo in Nueva Ecija was name after this plant. There were abundant kiyapo growing the creeks and river tributaries. Some local garden center sells Pistia stratiotes between Php 10.00 to Php 75.00 depending on the size. 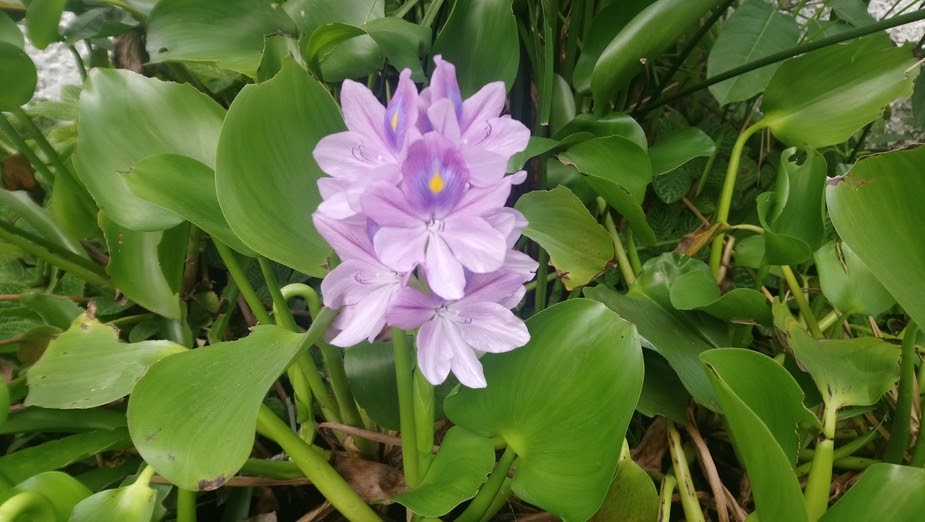 1.) Eichhornia crassipes, known as water hyacinth or incorrectly called water lily is an aquatic plant native to the Central and South American countries.

Water hyacinth was introduced to the country by the Spaniards in the late 16th century. It is now found in many parts of the world. Sometimes people would incorrectly called this as water lily and a festival is celebrated yearly in Las Piñas City.

Sipag Villar Foundation provides livelihood opportunity to women by helping them make products from water hyacinth. There are many uses of the stems such as wreath, baskets, mats, woven bags, tissue holder and slippers. Their livelihood advocacy had spread in many areas of the country.

However in many parts of the globe, this plant is considered as invasive species.

Hasan, M.R. (2009). “Use of algae and aquatic macrophytes as feed in small-scale aquaculture – a review”. FAO Fisheries and Aquaculture Technical Paper.

Christenhusz, Fay, and Chase (2017). Plants of the World: An Illustrated Encyclopedia of Vascular Plants. University of Chicago Press. p. 188.