Plant lovers, enthusiasts, plantitos, plantitas, platiquarians, halamanmoms among others will be happy that there will be month long plant bazaar at Sm Mall of Asia in Pasay.

There will be different booths which sells ornamental plants, cacti and succulents, indoor plants, soil, pebbles, potteries, tools, fertilizer, seeds among others. The plant expo bazaar starts from September 18 to October 17, 2020.

Visitors must have quarantine pass and must follow guidelines set by IATF and by SM Mall of Asia in Pasay health and safety protocols.

Department of Labor and Employment in cooperation with SM group of malls for the past 6 years have conducted a job fairs every May 1 – Last year , There were more than 320,000 job seekers who trooped to various SM malls nationwide to find jobs.

job applicant looking at the bulletin board

This year was no different, in SM San Lazaro where the event was launched just few hours ago -long queues lined the mall ! In SM Mega-mall job seekers lined from basement up the  fifth level !

some of the applicants are busy reviewing their resume

Rice in a Box Food Company

The mall manager graciously “welcome” all the job applicants to the job fair .

One of the advantages of visiting a DOLE job fair is that a job seeker spends less money and less timer and minimal effort to find a job because DOLE gathers as many employers as possible—whether local or overseas—under one venue.

Note: all photos are taken by the author

Department of Labor and Employment : http://www.dole.gov.ph/

A unique exhibit of 50 life-size canonically crowned and miraculous images of the Blessed Virgin Mary   from November 7, 2011 to November  29, 2011 at the Mall of Asia in Pasay City.

Entrance to the marian exhibit

For the past 5 years Radio Veritas has continuously been informing on and propagating the devotion to our Mother through their Grand Exhibit held in different malls and schools throughout the country.

The event was organized by the  Radio Veritas 846 Radyo Totoo is the official  Catholic -run tri-media company with its AM station and is the official radio station of   of the Archdiocese of Manila.Its mission is to further spread the central role of the Blessed Virgin Mary in the life of the Roman Catholic Church.

The cult of the Virgin of Candelaria or Our Lady of Candelaria (Virgen de Candelaria, Nuestra Señora de la Candelaria), popularly called La Morenita, celebrates an apparition of the Virgin Mary on the island of Tenerife ,  one of the  Canary islands in (Spain). The center of worship is located in the city of  Candelaria .  This statute standing on a pedestal  is over 6 feet tall with artificial tree with pink colored flowers at its background.

The relics of Blessed Pope John Paul II, known as the Marian Pope, are also on display.

Our Lady of Porta Vaga

According to one of the organizer of the event, some of the life-sized images of the Blessed Virgin Mary are already several decades or even centuries -old.

One of the most important Marian images are from Manila Archbishop  Gaudencio B. Cardinal Rosales.

Origin of the word :

The image on top of a tall bush among kingfishers called casay-casay (pronounced by the Spanish as Caysasay). The priest and the townsfolk took it as a sign that this is the place where the image would want to stay so a chapel was built on the spot.

The exhibit carries the theme “Miracles and Healing Grace.” according to Bishop Honesto F. Ongtioco encourages the faithful “to strengthen their Marian devotion by visiting the exhibit.

Origin:  The image of Our Lady of Aranzazu dates back the fifteenth century, this was on June 11, 1459 in an obscure place in the mountains of Aloña, Province of Guipuzcoa located in the northern-most part of Spain.

A young shepherd, named Rodrigo de Baltzategui, son of a carpenter of the nearby town of Oñate, climbed up the mountain one Saturday noon in search of his flock of goats. Unexpectedly, he thought he saw a vision of a beautiful Lady with an infant in her arms. He approached the heavenly visitor trembling. The apparition spoke to him: “My son, go tell your father to build me in this site a tiny shrine of five thin boards and seven tiles. You will call this a shrine, I assure you that it will be famous in time, that a great number of my children will come here to honor me with songs of praise and attend holy Masses here.”

Afterwards, Rodrigo heard the sound of bell ringing although nobody was around and to utter amazement he discovered a small stone image of a seated Virgin holding an orb on her right hand with Her Son atop a curved thorn-tree trunk. He knelt before it, recited the Hail Mary and other prayers he knew, and later with great reverence, he covered the holy image with branches and other things he could lay his hands on. And because it was getting dark, he brought his flock home.

Our Lady of Aranzazu with herd of sheep

The young boy relayed the message to his father and to the other residents of Oñate. It was summertime and there was a severe drought in the land. The people were preparing to make a penitential procession to ask for rain. Rodrigo approached the one in charge and told them the request of the Virgin, with eloquent faith in the miracle. He warned them that unless they construct the shelter for the image in the mountains, their prayers will not be answered. He insisted on this with so much faith that the people began to be curious and the excited residents of Oñate decided to climb up the mountain, guided by Rodrigo. The clergy and the civil authorities of the place did not put any objection to the popular will of the curious populace.

Upon reaching the place, they found the image resting on the entangled prickly branches of the thorn-tree and the cowbell hanging at the foot of the small image. The image had a serenely sweet face and of majestic mien. The cowbell was an antique quadrilateral bronze bell. The people were all astounded and believed what they saw. Everyone prostrated and did homage to the image and afterwards they went back to spread the news of the miracle.

In the Philippines, This image is venerated in  San Mateo and Montalban  in  Rizal  province , Carcar in Cebu province .

Relics from different saints and holy person on public display

Relics may fall into several categories:

First class relic : parts or body  of the saint ( hair, bone flesh) normally considered as precious and rarely entrusted to any individual but are placed in faith communities .

Second class relic :  A second class relic is any object that a saint touched or used during his lifetime. An example would be an item of clothing he wore or any of his personal belongings. This is different from a first class relic, which is a part of a saint’s body (his blood, bones, hair, etc.) second class relic maybe sub-divided into 2 category .

Third class relic:  maybe a piece of cloth touched to an actual 1st or 2nd class relic. This is the mot common type of relic.

OUR Lady Of China

Pope Benedict XVI has declared the year 2012 as the Year of Faith to strengthen devotion to Mary and faith in God.

Note:  Edited version of this may be found in some newsletters

Popular boy band In Real Life will be having their mall tour in SM City Fairview on November 9, 2018 in which they will spice up the celebrations at SM Fairview Hometown Holiday special.

They will have a special meet and greet with fans at the atrium area of the mall starting at 5:00 pm. 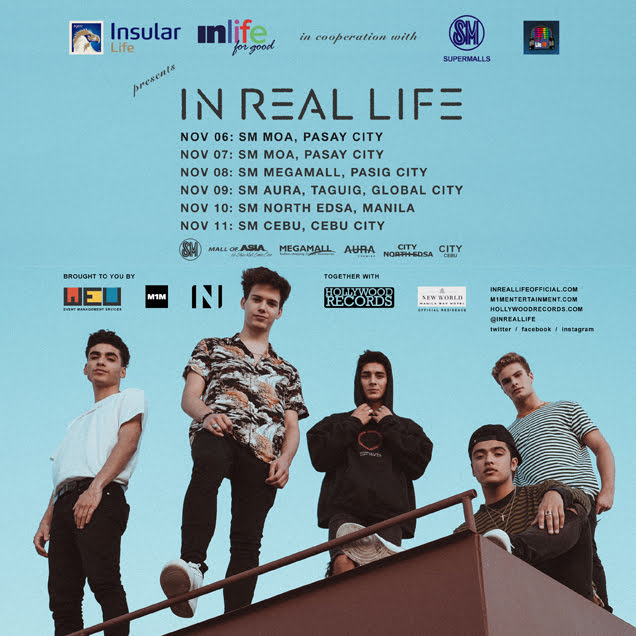 The group is currently on its first international tour and has been holding mall shows in Manila. It is set to bring their show to Cebu this November 11.

They are known for their songs “Eyes Closed,” “Tattoo (How About You),” “Tonight Belongs To you,” among others.

Hobby at Worx proudly presents Collecticon 2018 (Toys & Hobbies Convention), this September 15 and 16, 2018 at SM Megatrade Hall 3. This event is a two-day festivity of collectors and toy enthusiasts. Over 50 booths of toy sellers and retailers from all over the Metro will be present. An array of toys and collectibles that will surely be enjoyed by hobbyists, collectors and casual goers alike.

Here are some of the highlights

An exciting line of activities will be presented to attendees:
(1) Collectors display and exhibit of life-sized statues
(2) Toy auctions
(3) Gundam Caravan
(4) Artist Alley and,
(5) Many more suprises await you

There is a minimal entrance fee for the visitors of the convention at Php 100.00. There will be on the spot raffles and other freebies.