The exhibit entitled “Mga Pinuno Para Sa Pamana” (Leaders for Heritage) at the Manila Central Post Office main building will showcase Filipino leaders as essential guardians and propagators of culture. In line with this, PHLPost shall also be featuring the 2019 Heritage stamp issuance entitled “Women as Heritage Keepers”. 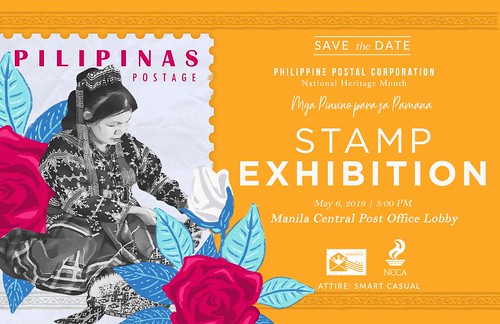 The Philippine Postal Corporation, in coordination with the National Commission for Culture and the Arts (NCCA), will conduct a Philatelic Exhibit featuring Special Stamps from notable philatelic collectors in celebration of the National Heritage Month for the entire month.

This issuance aims to give emphasis on the work Filipino women have done as leaders and/or contributors to their different fields.

The Philatelic Exhibit will be launched on May 9, 2019 at 3:00 pm at the Manila Central Post Office main building, Liwasang Bonifacio, Ermita, Manila to be attended by philatelic collectors, partner government agencies, among others. The exhibit will be open to the public from 8:00 AM to 5:00 PM, from May 9 to May 31, 2019.

There will be a special postal heritage walking tour, stamp talks, stamp bazaar, stamp swap meet and viewing of stamp exhibition schedule on May 18, 2019 ( SATURDAY ) from 8:30 am until 12:00 nn.

entrance to the National Trade Fair 2011

The Philippines’s most comprehensive local trade show which features the best products, services, tourism spots from the country’s 17 regions. Now on its 20th year, the National Trade Fair (NTF) has served as a platform for launching new products, services and has helped over 3,000 small, medium scale business enterprises in brand building, product awareness, increasing their sales and finding new customer base.

Some of the countries biggest export oriented industry started their participation in the National Trade Fair. The show featured about 250 small and medium scale enterprises.

scarecrow greeted the visitors to the event

There is also an individual competition where several scarecrow life sized statutes were judged for their design.

Gawad Ginintuang Yaman honors the extraordinary contributions of individuals or institutions in uplifting the Philippine economy through their own advocates or respective businesses. It is a salute to the outstanding efforts of private or government organizations and individuals in supporting NTF and contributing to its legacy.

The Gawad Ginintuang Yaman sets a new standard for companies and institutions to perennially vie for excellence in the hopes of attaining this illustrious award.

National Commission for  Culture and the Arts (NCCA) also exhibited ” Banig“. Banig is a handwoven mat usually used in several southeast Asian countries like the Philippines for sleeping , sitting . Depending on the region or province of the country. The mat may be made from buri, pandanus . The leaves are dried, usually dyed, then cut into strips and woven into mats, which may be plain or intricate.

The Samals of Sulu usually make their mats out of buri leaves. Often, dyed strips of buri are woven to produce a design.

Another region in the Philippines which is famous for intricately designed mats is Samar, where the mats are usually made of pandan leaves. The leaves are dyed green, then different colored buri strips are inserted into the plaits to make the design.

Banig woven mats are also made into Filipiniana items like Philippine terno , sandals, slippers and bags

The company specializes in coco beads, coconut by-products , coco shells and started to export in other countries.

A woman in native costume together with admirers

According to the sales person manning the booth , The company is also into retail of their products .

The company was formed in 2006. Basista which is located in the province of Pangasinan consists mostly of farmers which engaged in planting various staple crops like rice, corns, mangoes , garlic and fruit trees. The Basistans, young and old alike, have this inept ability in making handcrafted products. This god given gift has made Basista, the cottage industry town of Pangasinan in the 1970’.

artificial flower arrangement made from cornhusk

The company had various products made from corn husks like slippers, bags, ornamental, rope twine, artificial flowers. According to one of the sales executives,   several years ago , their company won several awards in design which was sponsored by DTI and CITEM .

Gathering and processing the plant would greatly benefit not only the unemployed women residents of Taguig, but also help in the clearing up of clogged waterways and prevent floods. The water hyacinth is more popularly called water lily. Similar livelihood project is also being initiated by the local government of Las Piñas .

The aim of the national trade fair is not just to showcase the regional products , but also protection of the environment thru the usage of indigenous and natural made products . The beautiful products that were showcased in this fair is also a source of livelihood and income for many of the people in the country.

April 29, 2010 ( Thursday) Officials of the city government  said that the Met—fondly referred to as the “grand dame” of Manila’s theaters—is on its way to being restored to its former glory.

group photo of the stakeholders within the  Metropolitan Theater

According to old historical records, There used to be an old theater during the Spanish colonial period ( Teatro del Prinsipe Alfonso XII ) which was built near the present day Metropolitan Theater . The old theater was the main focal building within the large and sprawling Plaza Arroceros in 1862.

In 1862, the Teatro del Principe Alfonso XII was opened to the public and several foreign companies were hired to perform operettas, zarzuelas and three-act plays. On June 11, 1865, “La Conquista de Jolo” was staged there and it glorified the military campaigns of Governor Antonio Urbiztondo in the south, in 1750. Another play dedicated to the Spaniards who waged war in Jolo, Sulu  “Una Pagina de Gloria” was presented in April, 1876.

Unfortunately, the Teatro del Principe Alfonso burnt down a few months after that but it was never proven that an irate Muslim had put it to torch.

Japanese tourist posed at the Mehan Garden circa 1900’s – from the private collection of Mr. Centeno

No one lambasted him for being a profligate elitist with misguided priorities . The proposal was first conceived in 1924 when Manila was not only known as ” Pearl of the Orient” but also dubbed” Milan of Asia” , reputed to be as charming as Paris . This city embraced four cultures Asian, European , North American( American colony ), Latin American  through Spain and Mexico  .

It took another 6 years to lay the corner stone of the theater on a selected spot within the 8,000 square meter Mehan Garden . Finally on December 10, 1931 the art deco inspired architecture of  brothers  Mr. Juan Arellano and Mr. Arcadio Arellano following the American architectural planner Mr. Daniel Burnham lured by the unique opportunity of designing in tropical Asia these proud edifice would symbolized the power and glory of the American colonial administration.

The tiara domed  with stylized minarets, sensuous female figures in exotic drapes, an exterior with whimsical rope designs, friezes and curly cues, the clashing ethnic -like chimeras and asparagus turrets, the total effect of the architecture is totally different from the other colonial buildings.

The sculptures in the façade of the theatre are from the Italian sculptor Francesco Riccardo Monti , who lived in Manila from 1930 until his death in 1958, and worked closely together with J.M. de Guzmán Arellano. Highly stylized relief carving of Philippine plants executed by the artist Isabelo Tampingco decorate the lobby walls and interior surfaces of the building. Murals by National Artist Fernando Amorsolo, namely “The Dance” and “History of Music” adorned the lobby. ( now kept at the GSIS museum for safekeeping).

The stained glass facade was commissioned by Kraut Art Glass established by family patriarch Mr. Mattias Kraut . Kraut  company is famous for their art glasses since 1912 and the proscenium was done by the House of Pre-Cast.

a gallery of Filipino artists

The venue played host to vaudevilles , zarzuelas , performances by world re known artists like Jascha Heifetz, violin virtuoso were also also held within the theater.  Indisputably , the Metropolitan theater was the masterpiece of Architect Juan Arellano . He did it in Art Deco style which was the rage in the United States.

During its heyday, the theater could accommodate 1,670 people: 846 in the orchestra section, 116 in the loge and 708 in the balcony areas.

Manila Metropolitan Theater after the war circa 1945

Badly damaged during World War II,The theater became an ice cream parlor, boxing arena , garage, motel ,  gay club and eventually a squatter colony of about 50 to 70 families before it was rebuilt in 1978 by former First Lady Imelda Marcos.

Popular variety television show hosted by Ms. Vilma Santos in the 1980’s to early 1990’s aired on GMA channel 7 provided the entertainment every Friday to the crowd . While several top Filipino celebrities made their debut at the grad dame, Its condition deteriorated in the ’90s due to several factors . First is the  water seepage  on Met’s roofing , Second is the strong  Bagyong Rosing  ( Typhoon Angela) which hit the capital city in November 1995 causing further destruction on the theater’s outer roofing.  The category 5 typhoon  wreaked havoc over Metro Manila, Calabarzon Region and Bicol Region.

The Met fell into decay and finally closed down in 1996 following a long-running dispute between the Government Service Insurance System and the City of Manila over its ownership and management.

In 2004, the GSIS and city government finally agreed to set aside their differences, and, with the National Commission for Culture and the Arts, signed a tripartite agreement on a work action plan for the structure’s restoration.

Higantes provided a colorful backdrop to the festive atmosphere

Almost P90 million, including P50 million released by President Macapagal-Arroyo, has been spent for the project.

Television host German Moreno has vowed to initiate fund-raising efforts for the Met , said Araneta. Lim added that they are also waiting for another P50 million promised by the President.

Author’s note: The author through the Filipinas Stamp Collectors’ Club in cooperation with Manila Cityhall , Museo ng Maynila , National Press Club , Intramuros Administration and Philpost conducts a regular free guided tours within the Metropolitan Theater grounds every third sunday of the month . Pre-registration is required  to those people/ groups who wanted to join the free guided tours.