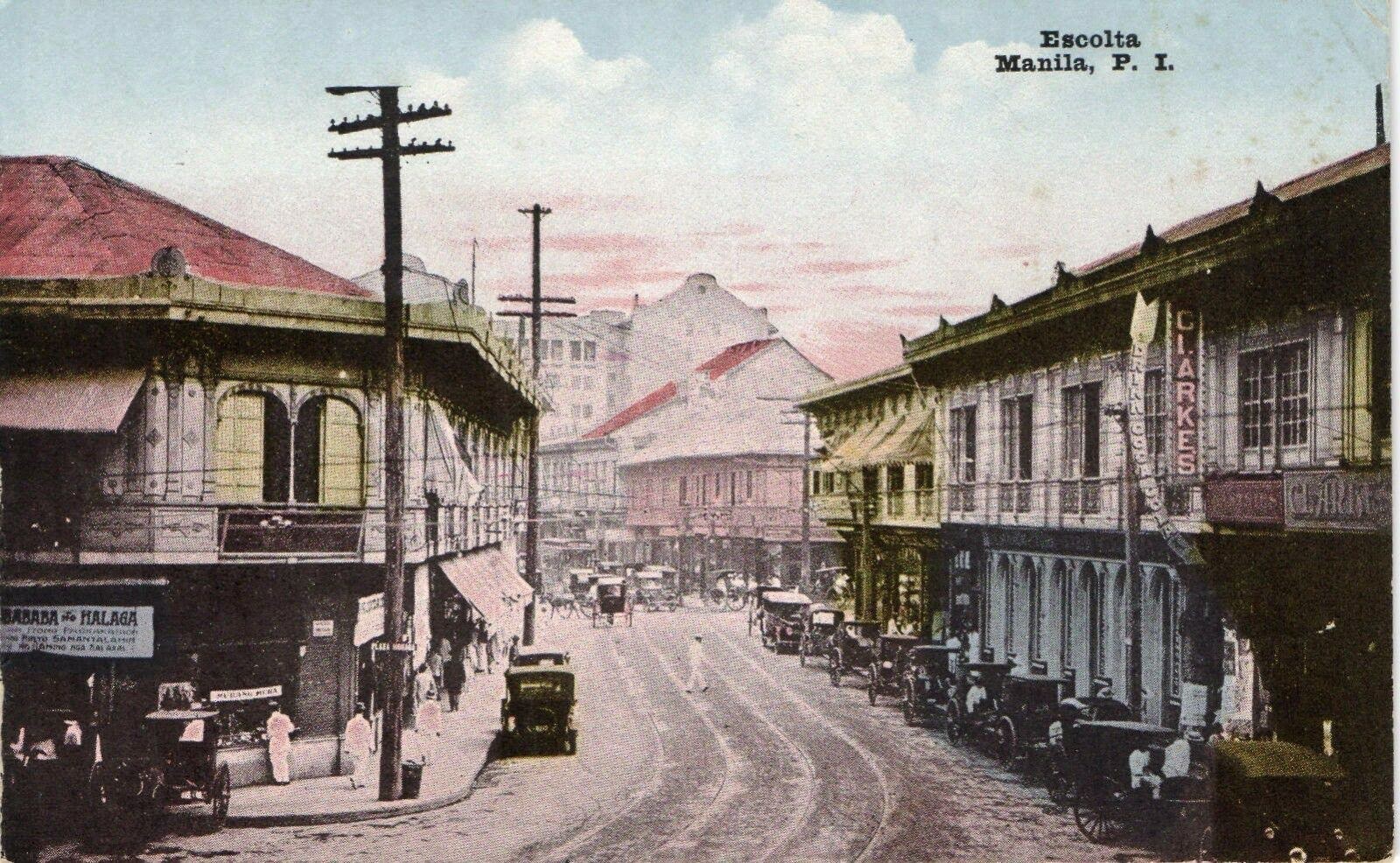 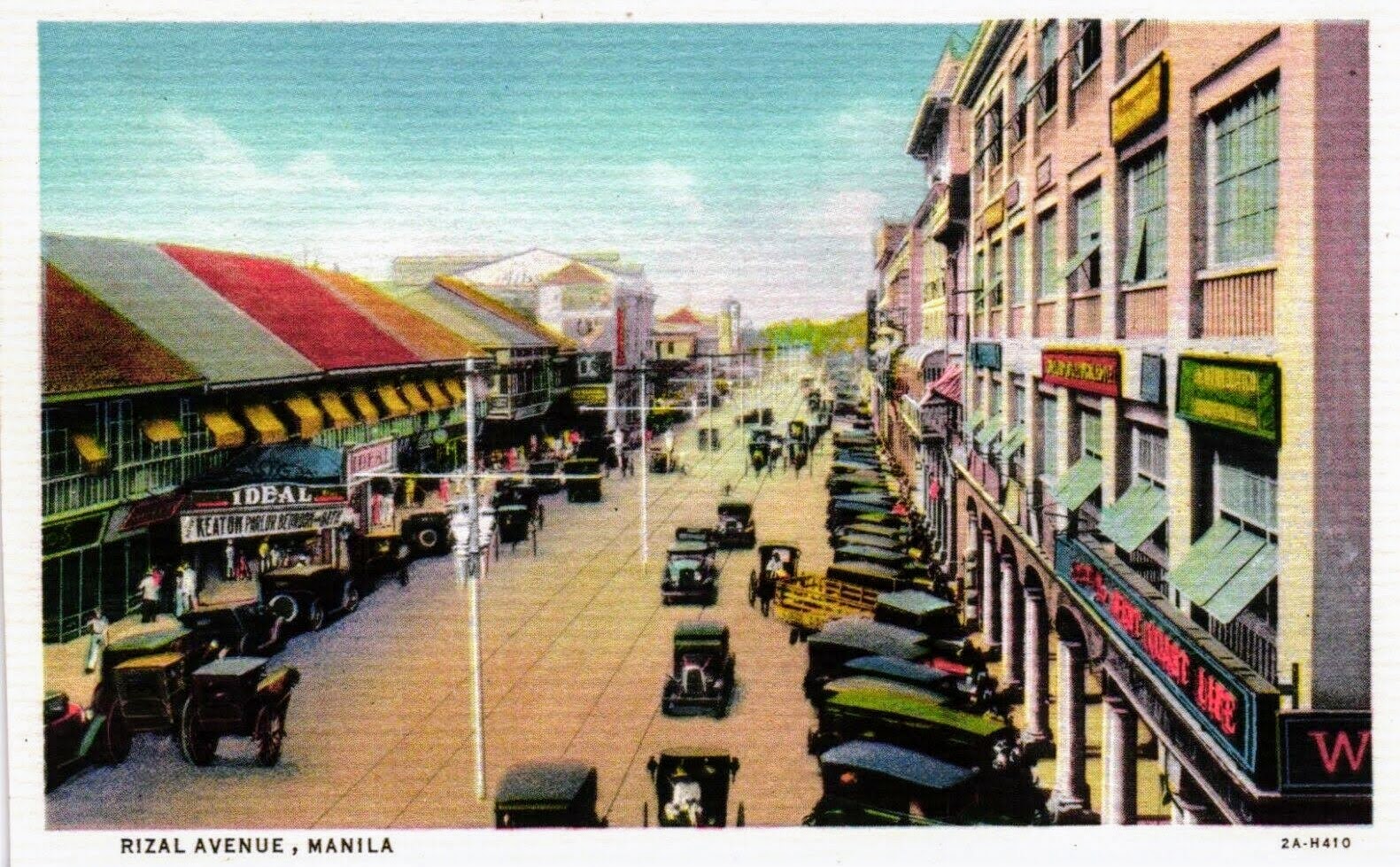 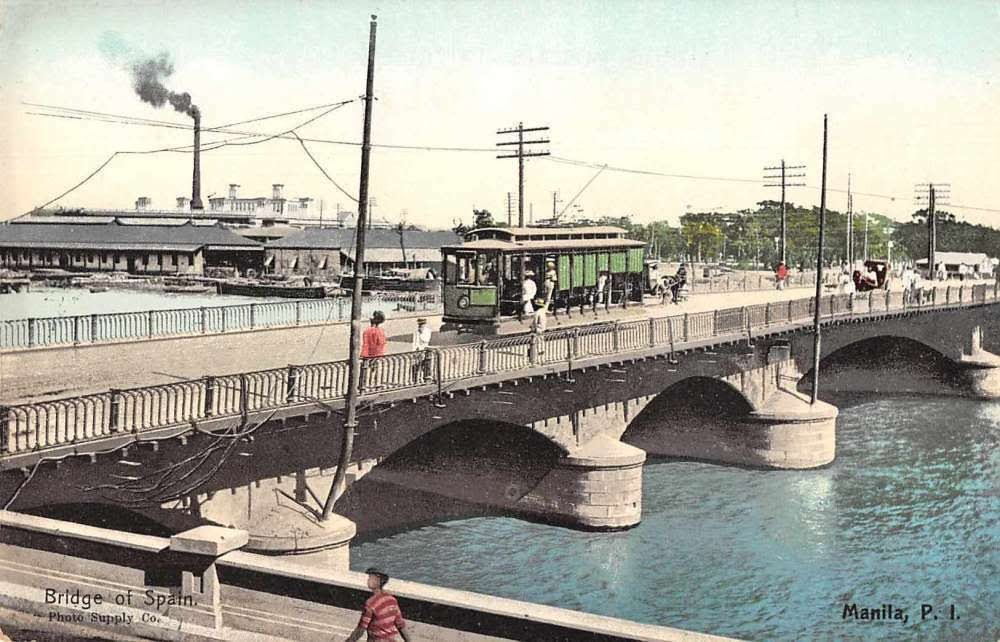 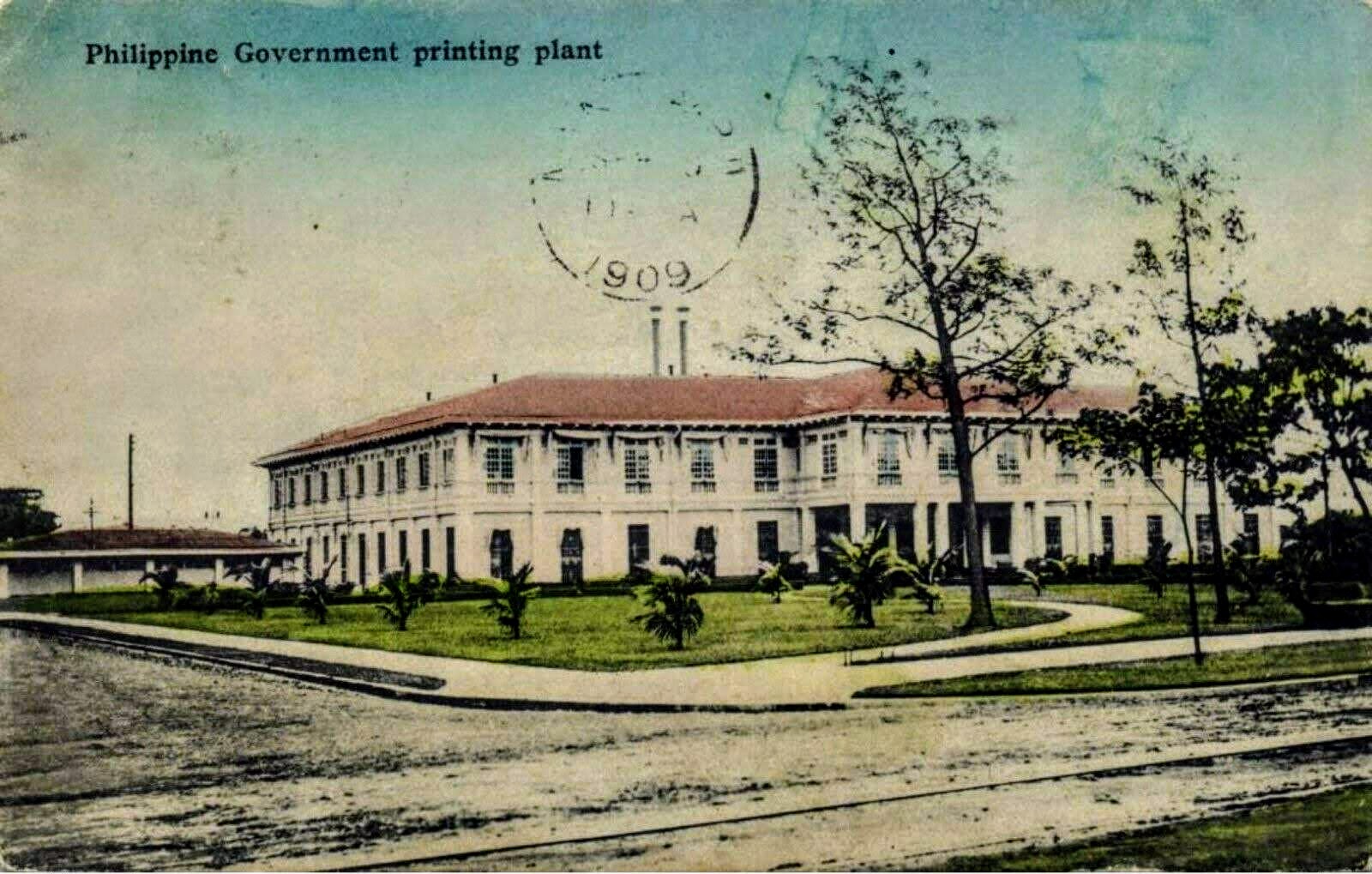 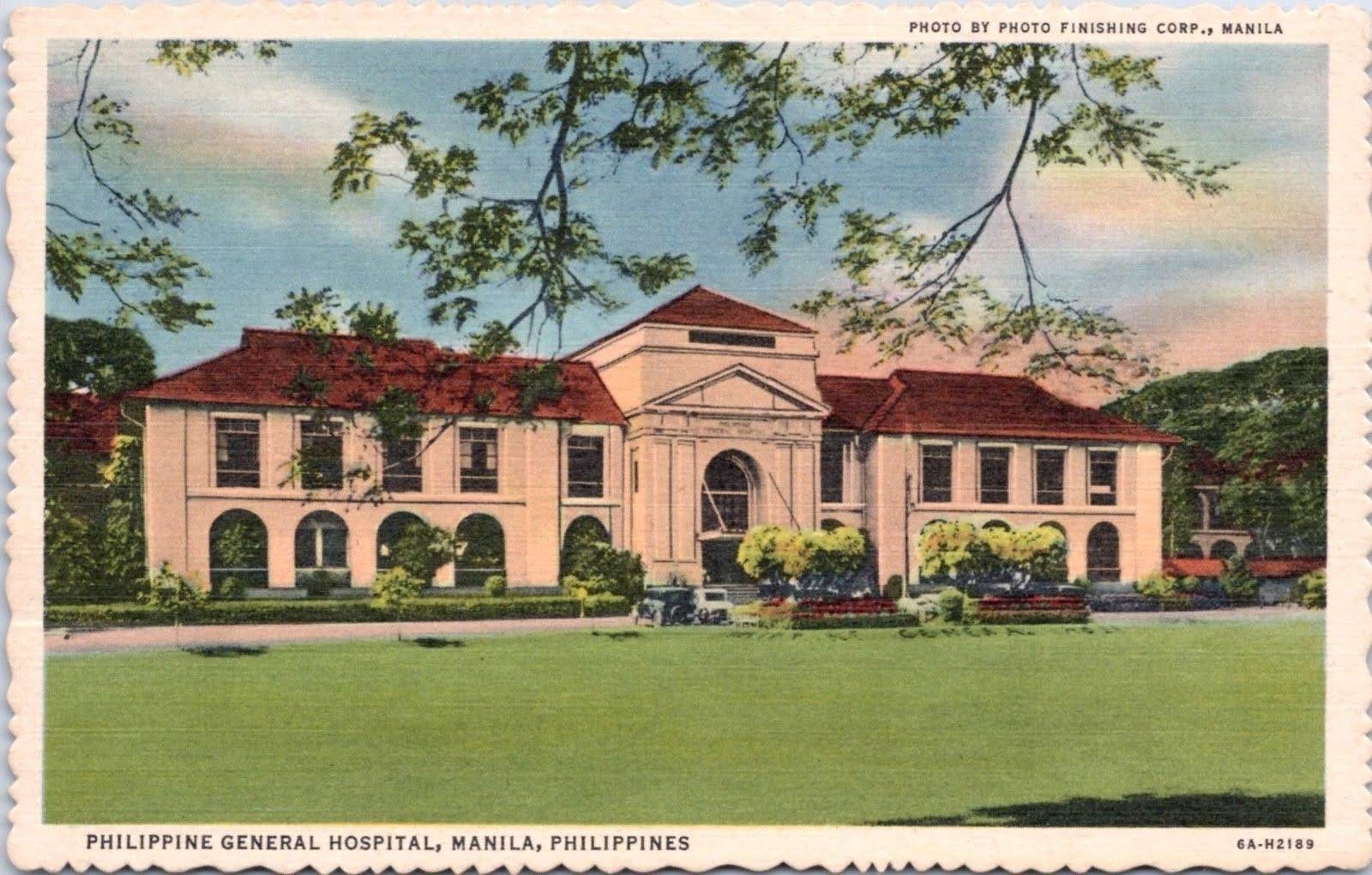 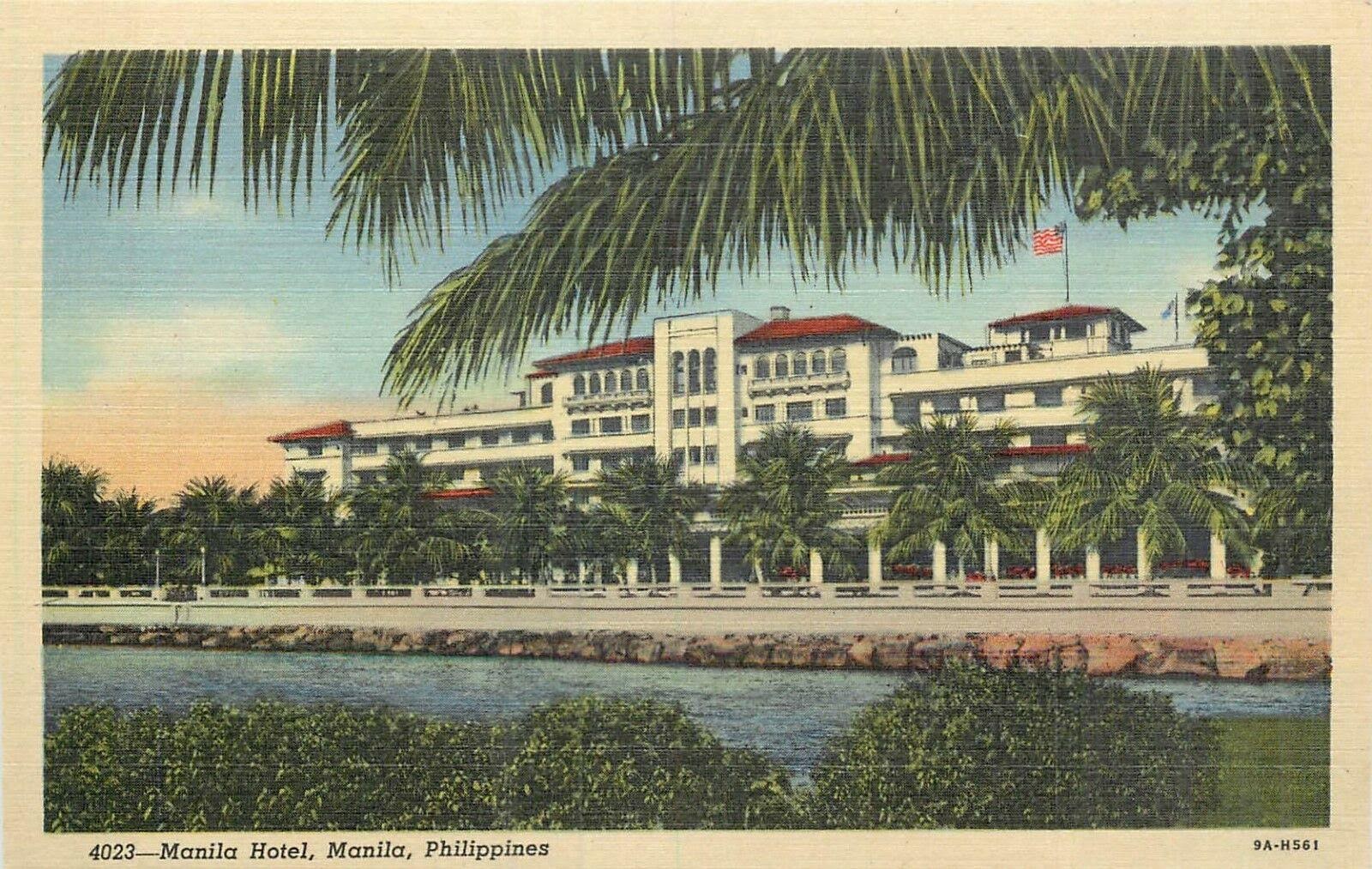 Manila is known by travelers,expats,scholars earn several accolades such as “Pearl of the Orient”, “Paris of the East”, “Milan of the East”, ” Little Vatican”, “Venice of the East ” among others. 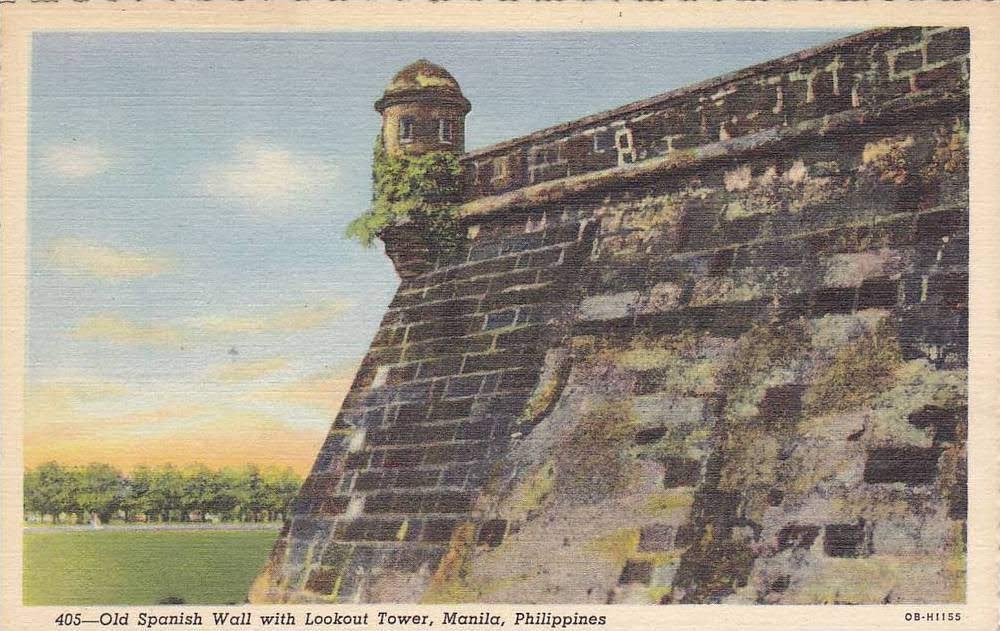 Postcards in the country were distributed during the mid-19th during the Spanish colonial regime and were known as tarjeta postal, even until now by old time collectors. Early postcards, bear features of Spanish monarchs and it was only in the late 1890’s when photo type postcards were printed and distributed by stores within Escolta, Binondo, Intramuros and large cities. 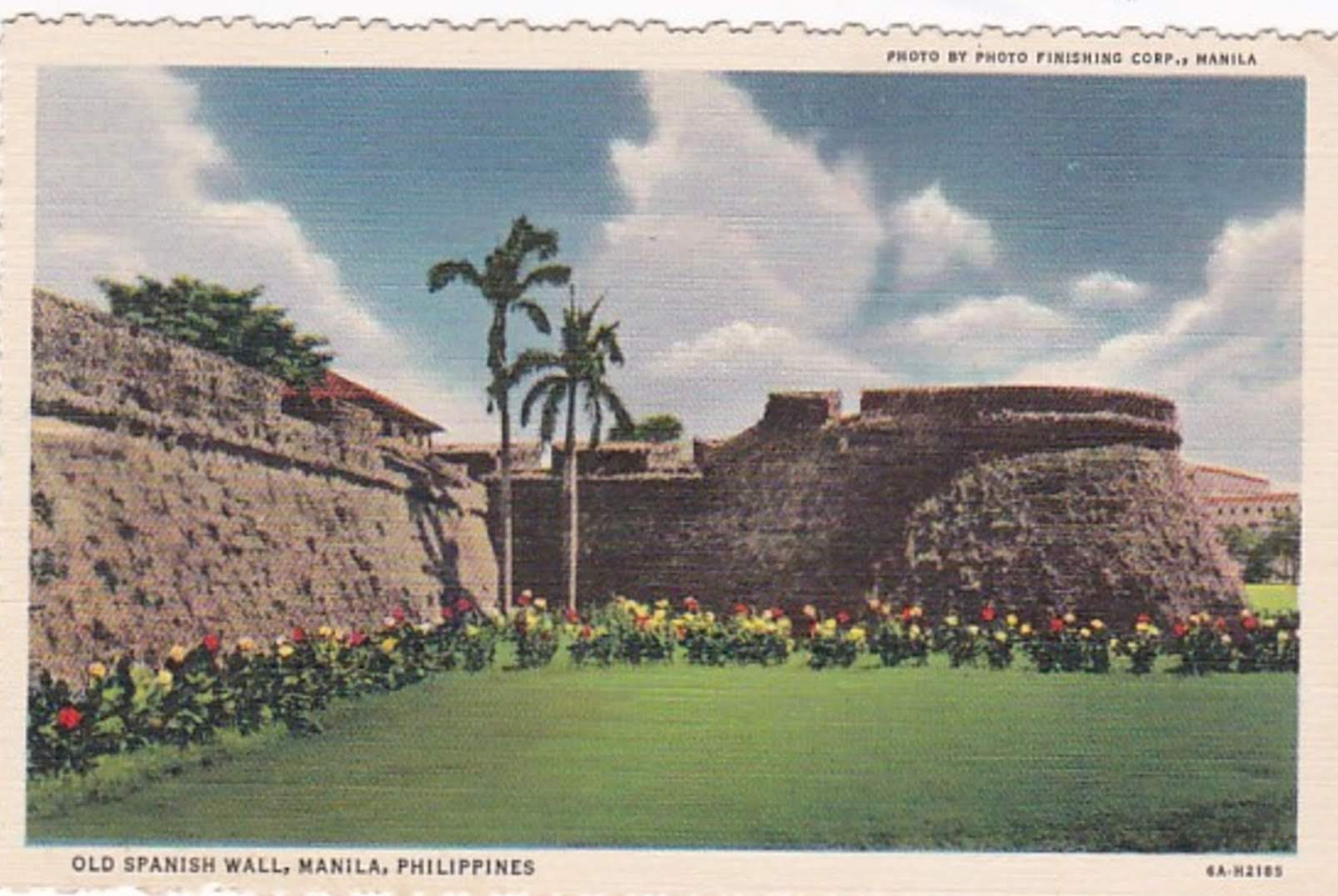 The Spanish government produced series in various printed denominations specifically for the country. Unfortunately thru time, revolutions, tropical weather, poor quality of the paper, printing quality available during that time. A lot of the postcards printed during this era barely survived. Early collectors would just put them on book shelves or any place. Most of the Spanish era postcards are hard to come by, even in specialized local bourse or club’s auction. 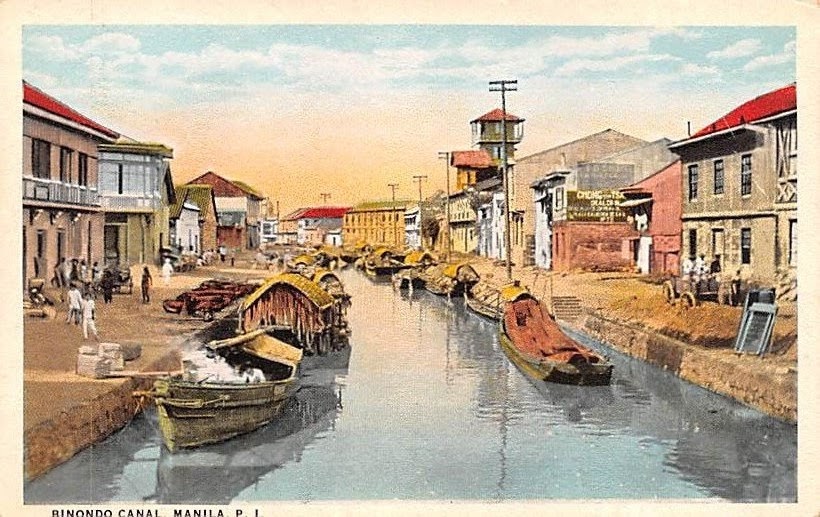 I have seen a handful of these trajeta postal mostly from specialized postcard collectors and bought 2 pieces Spanish -Cuban tarjeta postal printed around 1883 which bear the portrait of King Alphonso XII /Alfonso XII (pre-stamp). Some of the tarjeta postal printed in other Spanish colonies would also circulate in the country, since there are some Filipinos who lived and worked in those countries.  The country is under the Spanish crown, postcards printed in those countries may also been used in the country and coveted by some collectors. 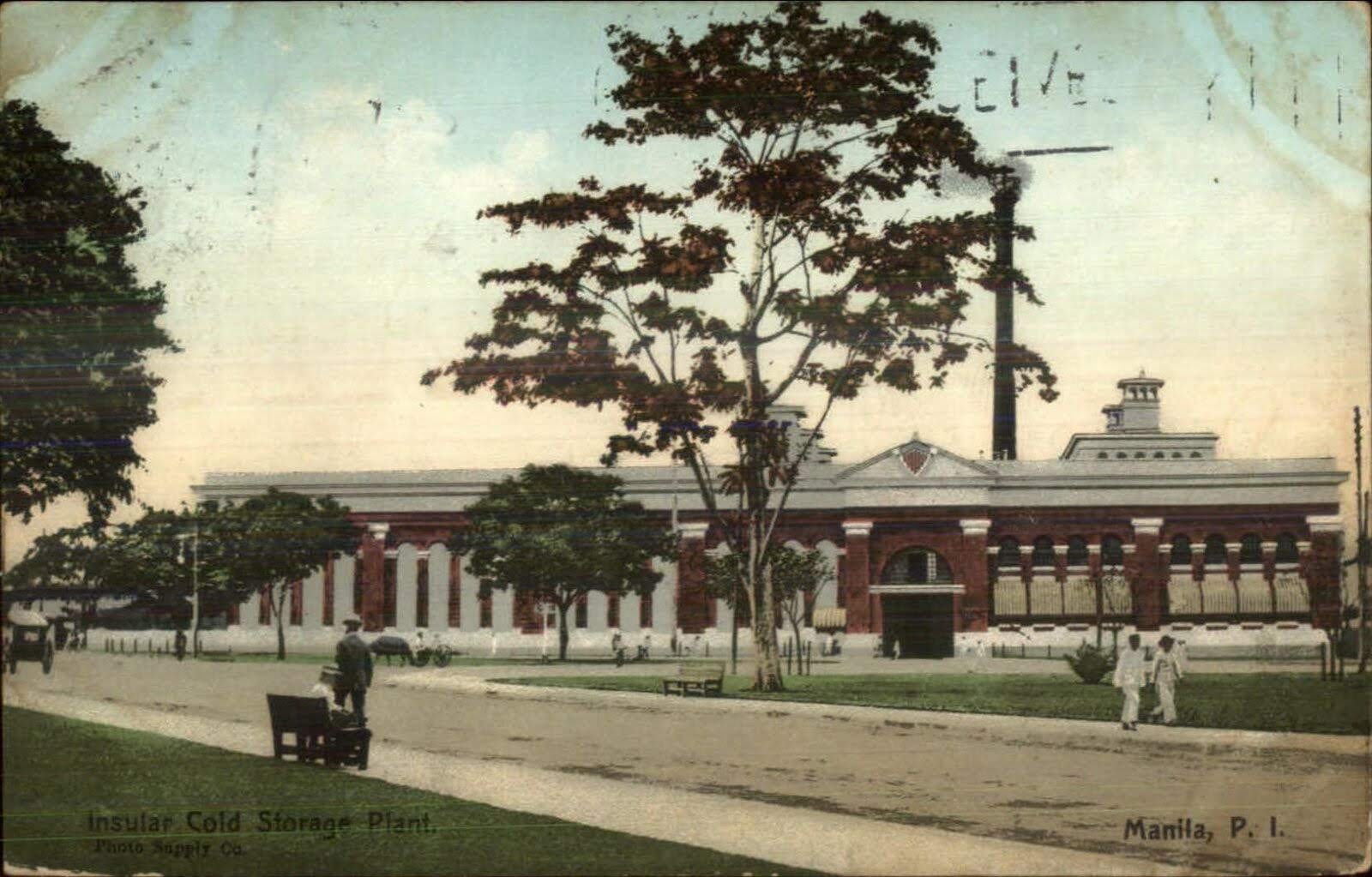 Insular ice plant is one of the major building infrastructure built by the Americans in Manila. 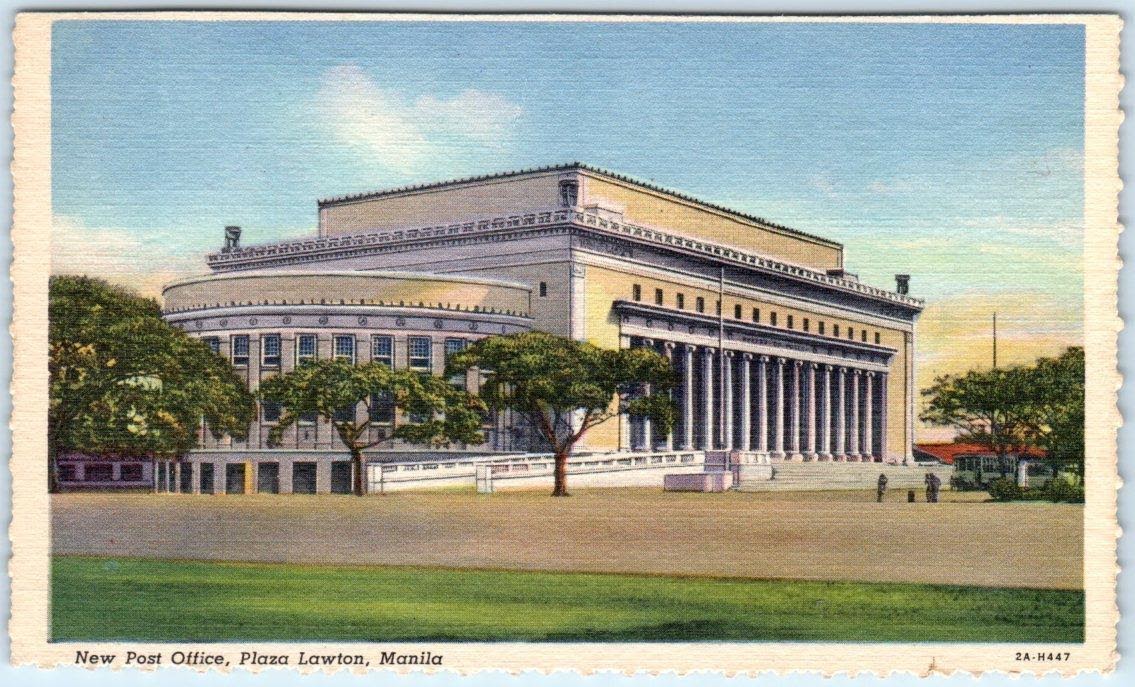 Manila Central Post Office used to be a horse stable and post office which serves the southern part of Manila during the last decade of the Spanish regime. The building depicted at the postcard was built from 1926 to 1930 under the supervision of Pedro Siochi and Company. The triumvirate of Ralph Harrington Doane, Tomas Mapua and Juan Arellano were the architects behind this magnificent building. 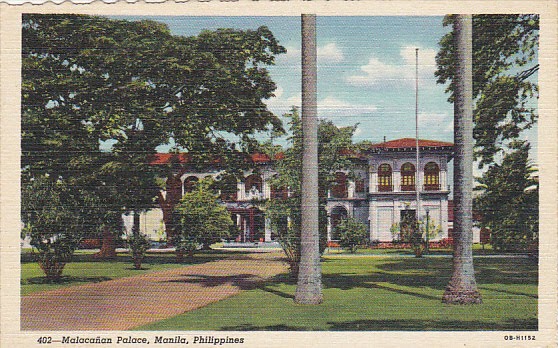 Malacañan /Malacañang Palace is another favorite subject in postcard and even  had a commemorative stamps issued during the commonwealth time. Several bookstores like Goodwill bookstore, National bookstore featured the palace during post war period.

The Americans started printing new postcards and were quickly bought by American military personnel or service personnel that were stationed in the country.
Since travel to the country became easier with faster steam engine vessels and larger commercial steam boats which ply the islands. More and more postcards
with different interesting topics were printed. 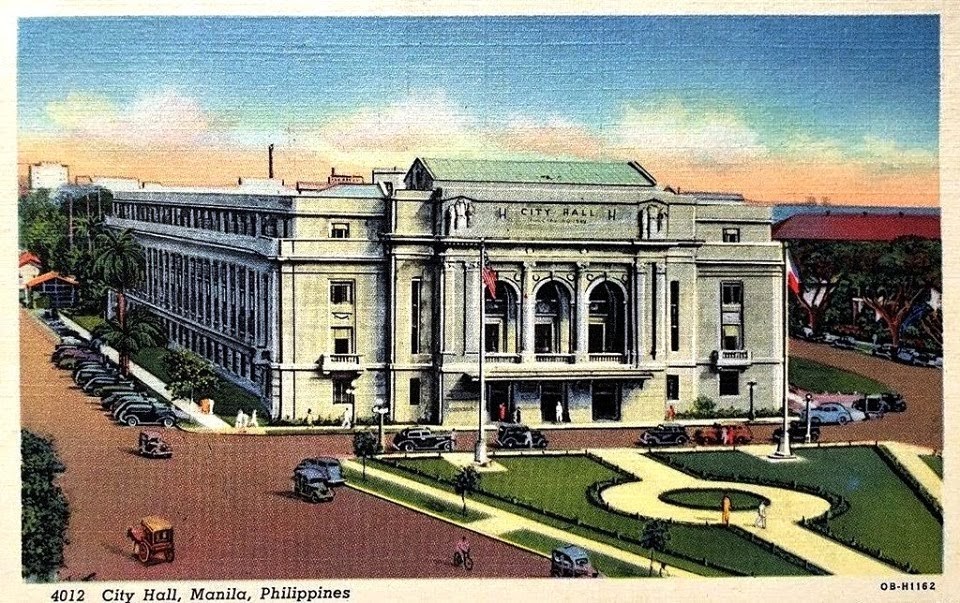 Manila Cityhall
The most popular were Manila carnival queens, ethnic groups, landmarks, public executions, people in filipiñiana costume among others. 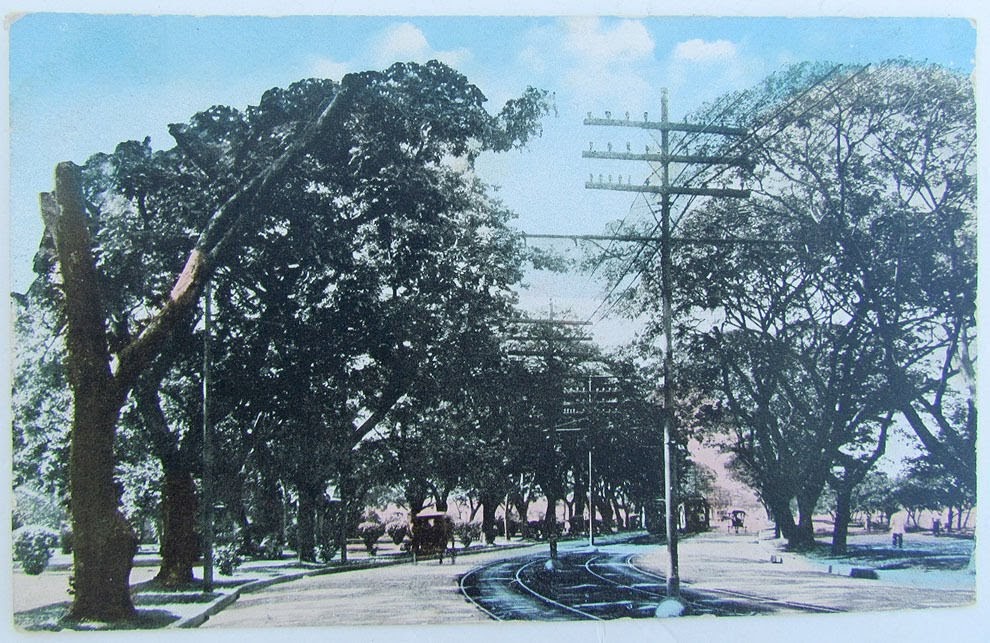 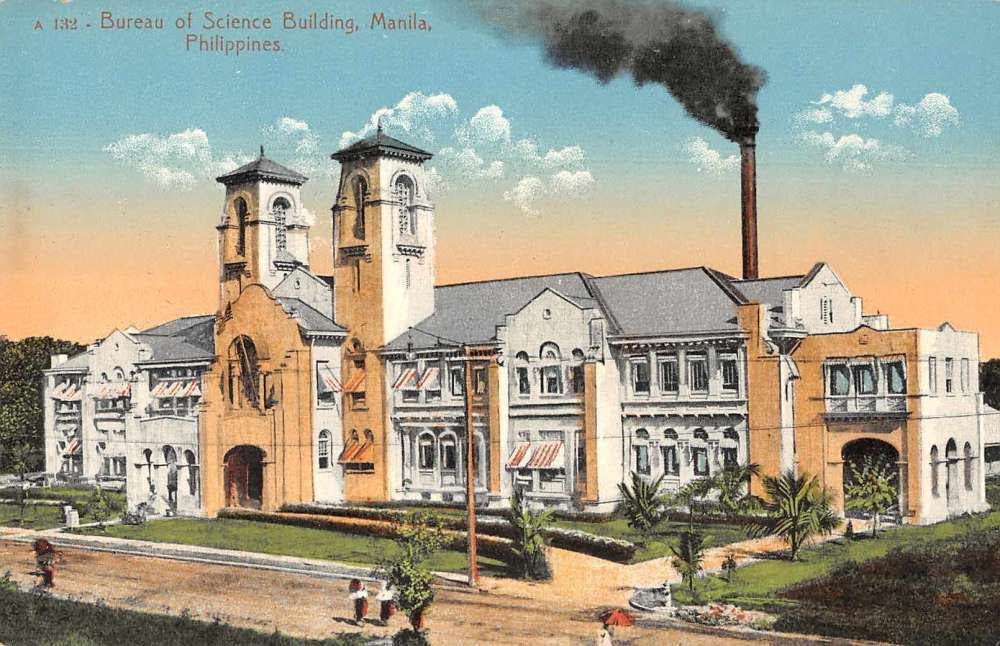 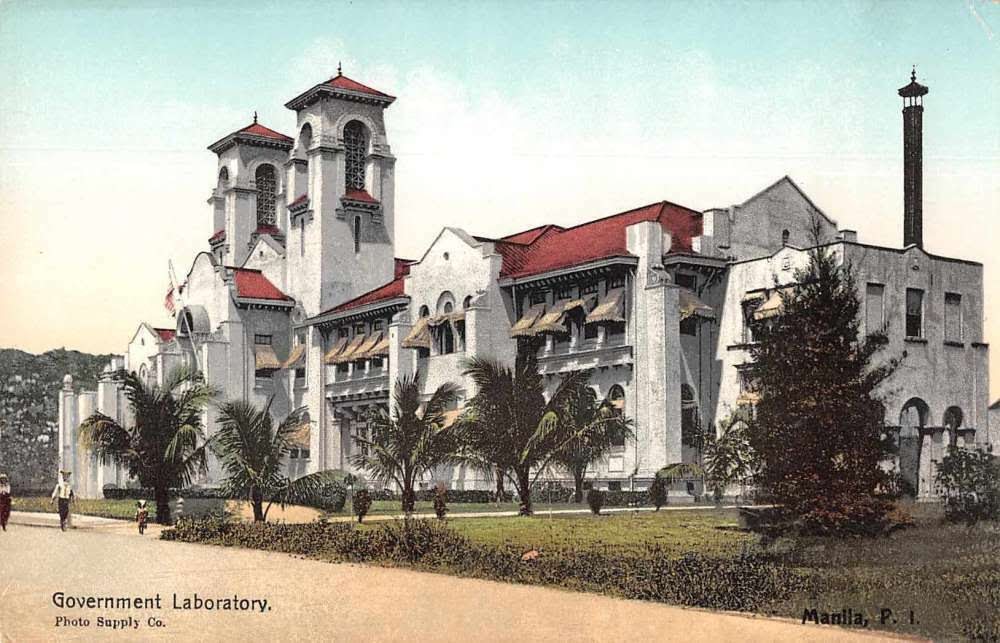 Bureau of Science building
The colonial government needed a laboratory to study and store the colony’s rich store of minerals, forest and agricultural products as well as manufactured goods like tobacco and rope. The California Mission-style Neoclassic building graced the PGH Complex off ,Taft Avenue until the war when it was destroyed. 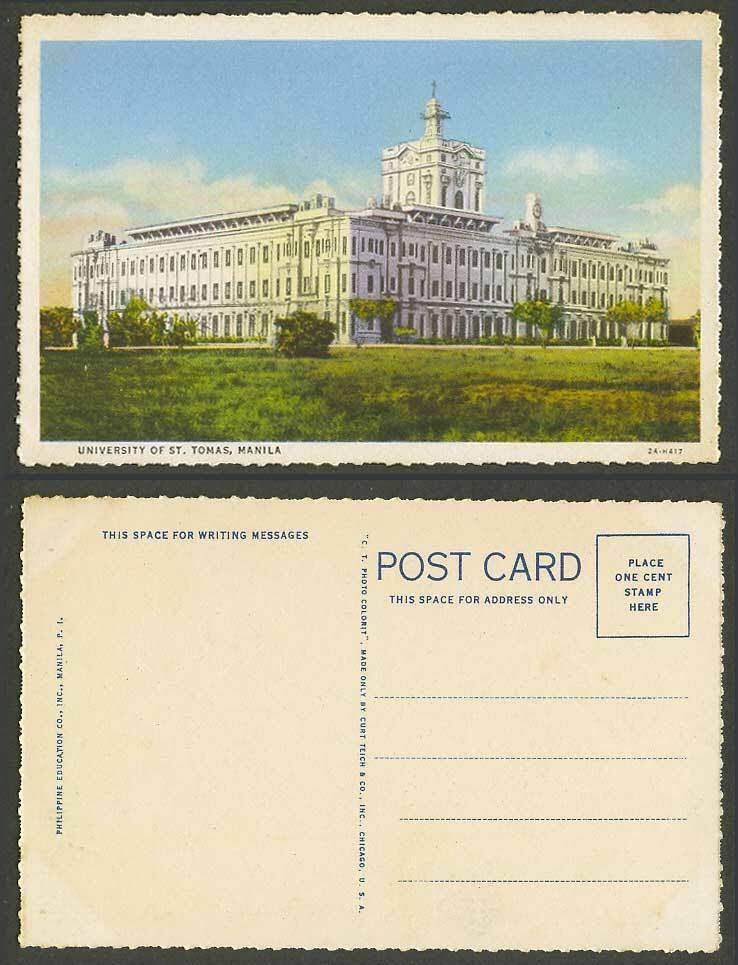 University of Santo Tomas– This pre-war postcard was probably printed around 1930. This is the newly built building at the Sampaloc campus.
Postal Card
Most businesses and the general public during the commonwealth regime would prefer using postal card. It is a type of postal stationary with pre-paid stamp affixed on the card.  These were classified under postal stationary of Philippine Islands under US Administration. Printed by the US Bureau of Printing and Engraving for use in the Philippine islands.
One can write short messages on the postal card and can be send very quick. 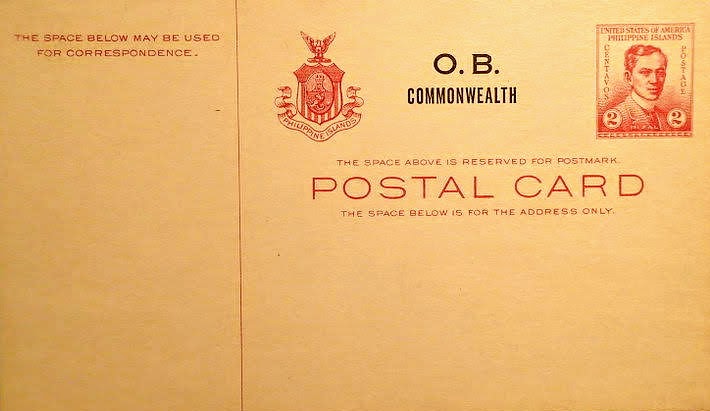 postal card issued during the commonwealth era with 2 centavos face value
Postal cards had a very interesting story. A lot of the postal card were hidden during the Japanese occupation and were brought out when the American or Allied forces began liberating major cities , hence there are popular cancellation and slogan  marks.
Sometimes these bear overprint cancellation marks of “V Day” ( Victory Day) postal card of 1945, marking the return to power of the commonwealth from the Japanese which occupied the country.
These became popular souvenir items by Allied forces and American troops which were stationed in the country between 1944 to 1946. Approximately 250,000 American service and Allied forces were stationed in the country during this time period.
These type of postal card is commonly used by business, personal and quite popular even until the late 1960’s.

This is a linen postcard showing the ‘Presidential Landing and Pier 13, Manila, Philippines.’ divided back, not postally-used, printed around 1940. This type was distributed by Philippine Educational Company Inc. (PECO) was popular souvenirs for tourists, students and collectors. This type of postcard circulated until mid-1950’s.

Pier 13 is located at the Manila south harbor, One can appreciate the clean Manila Bay and its surrounding areas during the commonwealth time. According to serious postcard collectors, PECO used to monopolize the distribution of these type of postcards until some entrepreneurs began using photo postcards and targeting schools, organizations and families. Goodwill Bookstore, G. Miranda and National Bookstore then started to issue their own postcard series. 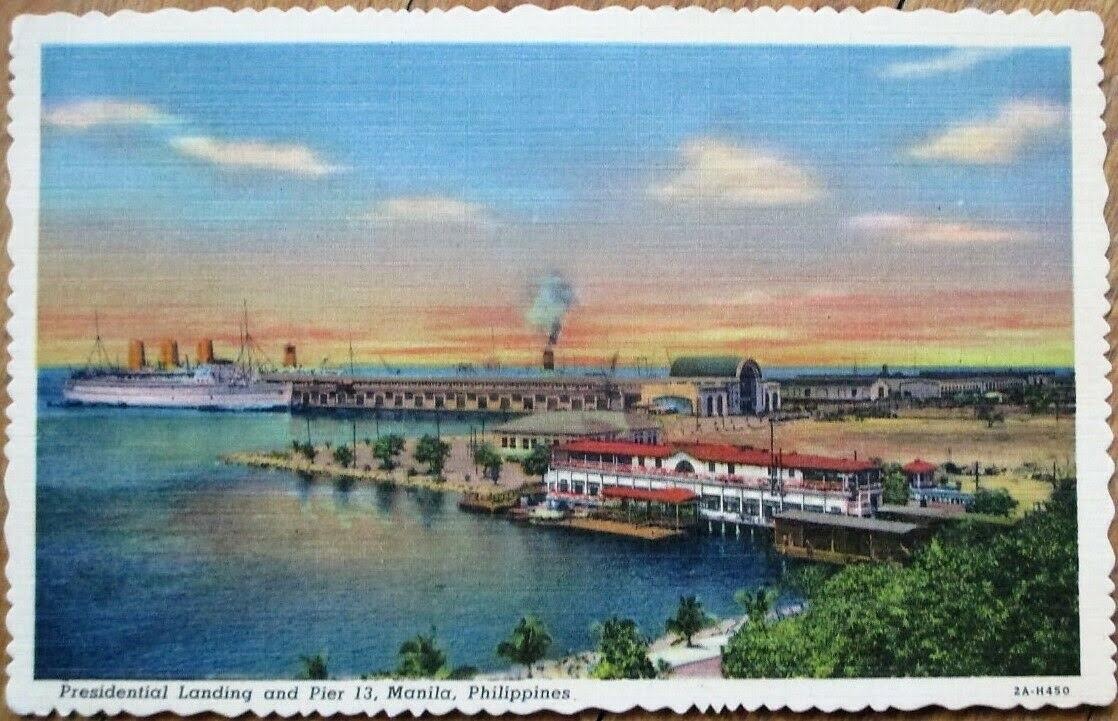 Unknown to many,these were not made out of linen, which is derived from flax, but they did have a high rag content, which means the paper contained a certain amount of cotton fiber. Instead, linen actually refers to the surface texture of the postcard.

This postcard was probably kept in an old photo album because of the sticky back side and some damages incurred by the previous postcard collector.

At the back, includes Genuine Curteich, Chicago “C.T. Photo Colorit” postcard US Pat. Of.

Curt Teich Company was founded in Chicago, Illinois, by Curt Teich (1877–1974) in 1898. The company printed postcards, view postcards, and advertising cards, and became the world’s largest printer of postcards.

Importing of postcards ceases during the Japanese occupation of the Philippines ( from 1942- 1945) and very few reached the country. Most of the highly sought after postcards are on the hand of serious postcard collectors. Postcards that circulated within the country where the old stocks held by PECO or secondary retailers. Most of the interesting postcard collection just before and after the war were presumed destroyed or lost during the liberation of Manila.

What ever remained in the hands of early postcard collectors ( deltiologists), souvenir hunters or memorabilia collectors were either lost in time, eaten by termites,mishandled,thrown in garbage bin or lost in fire.

This type of postcards is quite rare or even scare even in stamp club swap meet or some collecting club’s auction.

I bought this postcard along with the Nipa Hut Muslim House Seascape postcard  and Moro Carabao Sled postcard at the recent RetoCon2019.

This is a postcard which feature a nipa hut house on stilts within the sea owned by a Moro or Muslim family in Mindanao island – The first postcard was printed around 1910. This was distributed by Peco ( Philippine Educational Company) printed in (Lithograph) linen. 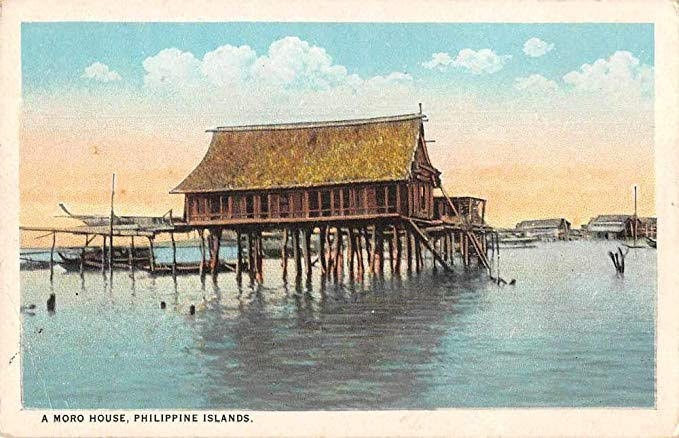 This topic was reprinted several times from 1910’s to late 1940’s and commonly send by US army to their families living in the United States. Tourist coming to the Philippine islands, postcard collectors and school project by elementary students before the war.

School children would paste this postcards in bond papers or photograph book. Most of the postcard available in the market is in poor condition. One can see that the obverse side of the postcard is badly worn out, sometime with traces of paste or tape.

Most of the nice quality ones are in the hand of postcard collectors in the United States and Europe. 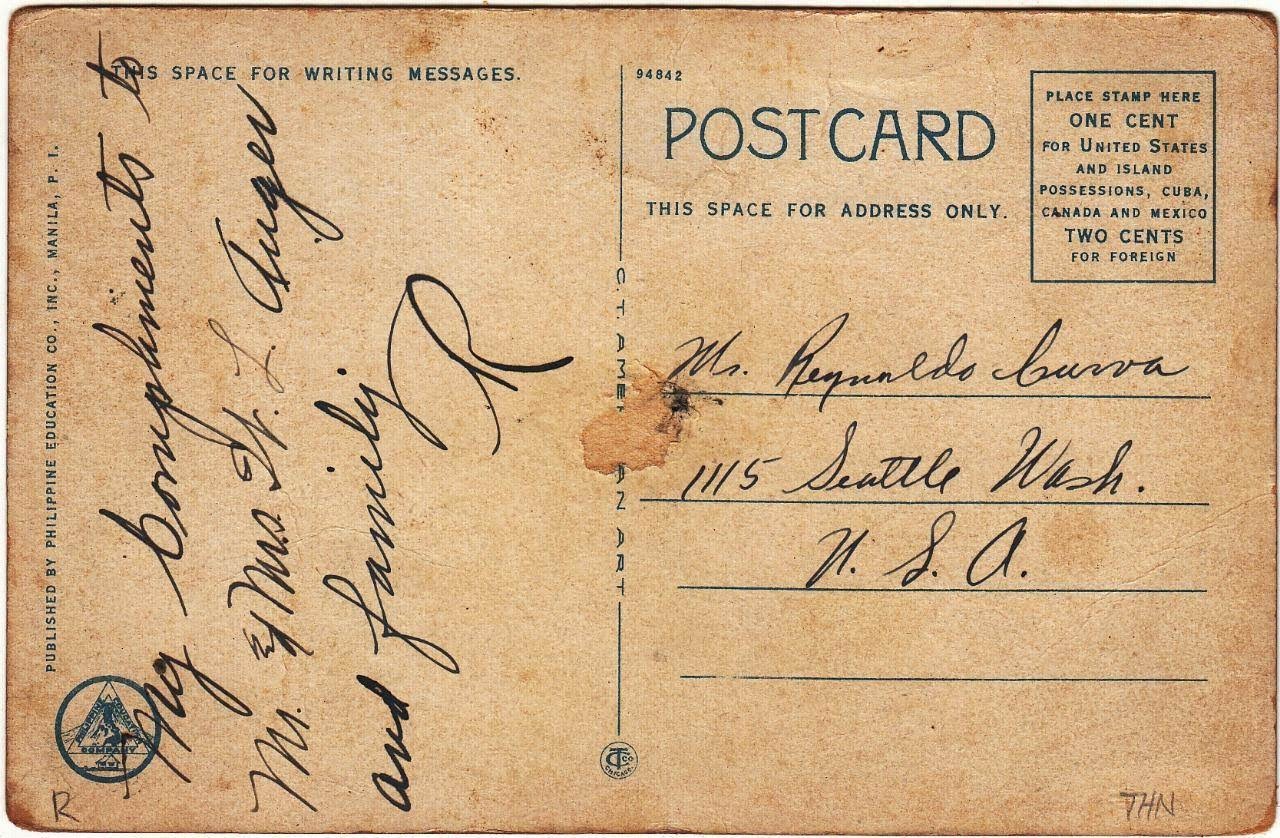 obverse side of the postcard

The obverse showed the recipient of the postcard is Mr. Reynaldo Larva or Lurva of 1115 Seattle, United States. The sender is Mr. and Mrs. W.L. Auger and family.  However there was no stamp nor postmark on this postcard. I presume that this might be hand carried to the recipient.

I had spotted this postcard during the last RetroCon2019 held in Lucky Chinatown Mall, Binondo, Manila.  The seller from Dekada told me that they gave a small discount for this postcard since i bought 3 postcards.

Planned to buy 2 more vintage postcards that i have seen. Cost a small fortune and the sellers did not budge to haggle down the price.

Quite happy that i have added 3 more vintage postcards in my collection.

PostcrossingPH FB members and enthusiasts had a memorable eyeball, meet-up that was held at the Luna Room in Museo ng Sining in Pasay City.

The eyeball and meet-up is much anticipated by the members. There were over 30 members who attended the meeting. These also include PHLPOST Business Line manager Mr. Maximo Santa Maria and some Philatelic section employees. 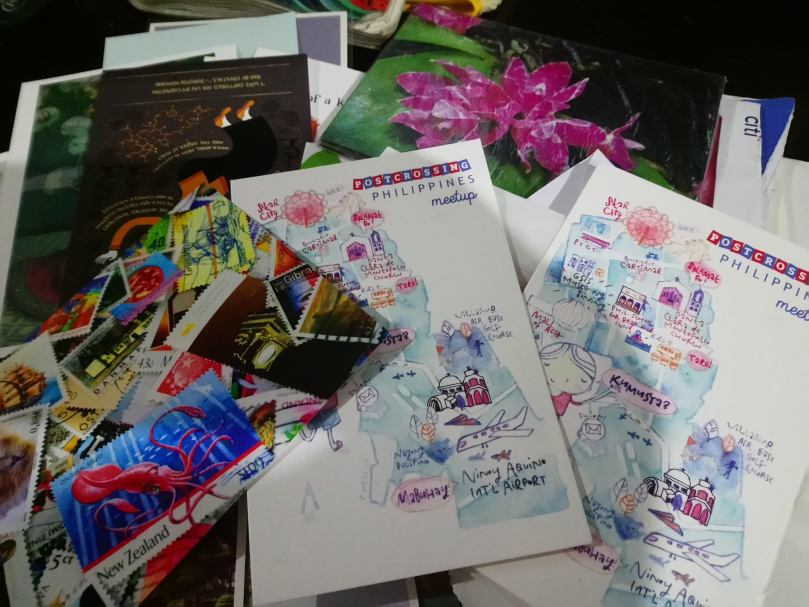 A short program was held past 2:00 pm where a short introduction of each members.

postcards, stamps, postcard holders, key chains, ball pen were some of the items raffled-off to the participants

There was the regular swapping of local postcards, gotochi or shaped postcards, mini-raffle and meet-up autograph signing was held.

There are also some self made PostcrossingPH meet-up postcards made by some individuals.

There was many familiar faces at the meet-up since some of the members also participate at the local stamp club meeting and auction.

We decided to leave the place past 3:30pm and head for the food review held somewhere in Quezon City.