LG Philippines which is one of the leading global technologies felt their presence as they simultaneously unveiled their newest line of state of the art OLED Tv’s, putting side by side with the rich and colorful history together with tomorrow”s technology. 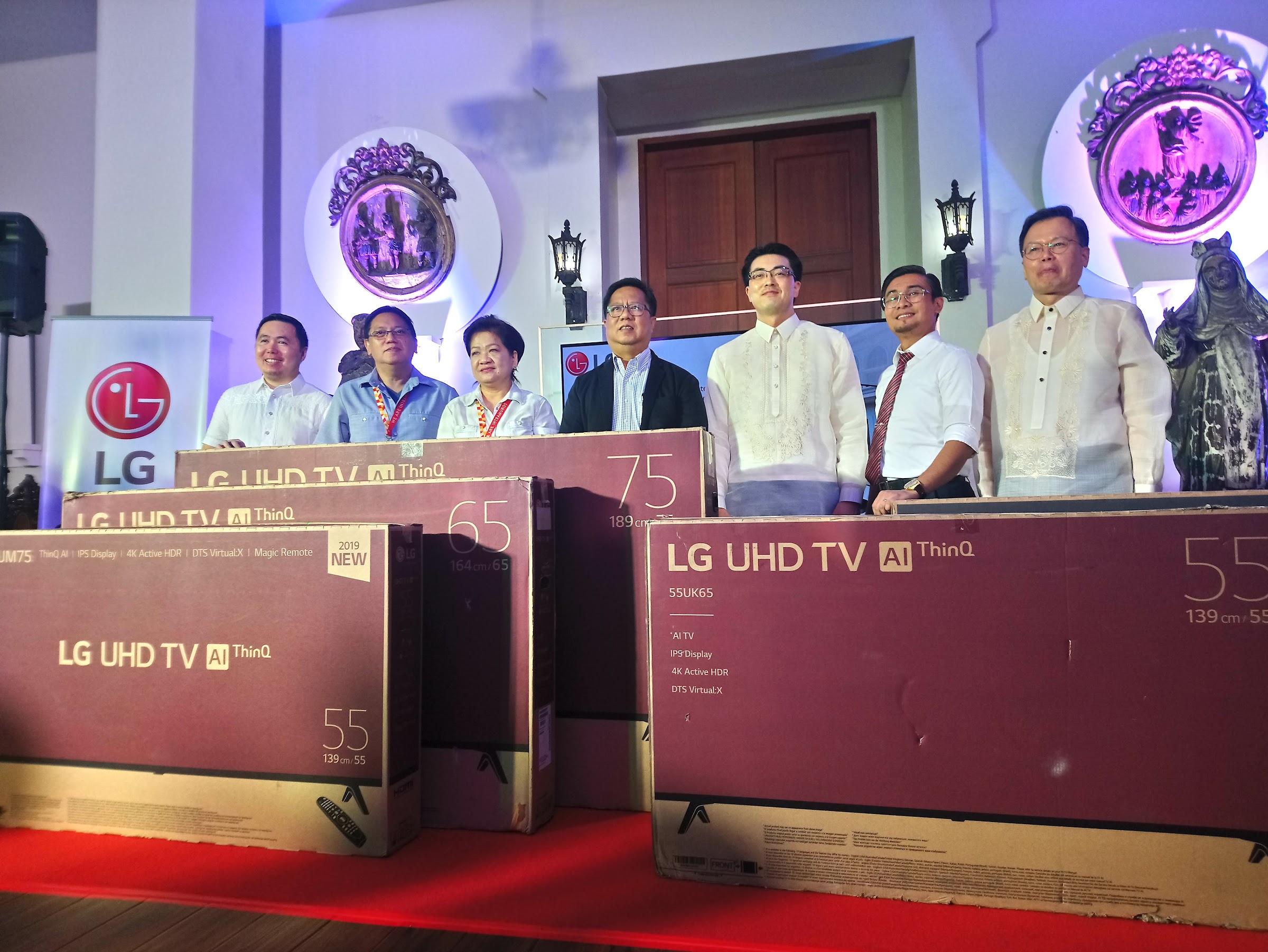 Intramuros administration (IA) the government agency tasked with the restoration, development and promotion of the national cultural treasure, celebrated its 40th anniversary in the recently opened Museo de Intramuros.  The event started past 2:30 pm with a short tour of the galleries of the museum. The tour was led by Mr. Dino Santos ( curator ) of the museum. 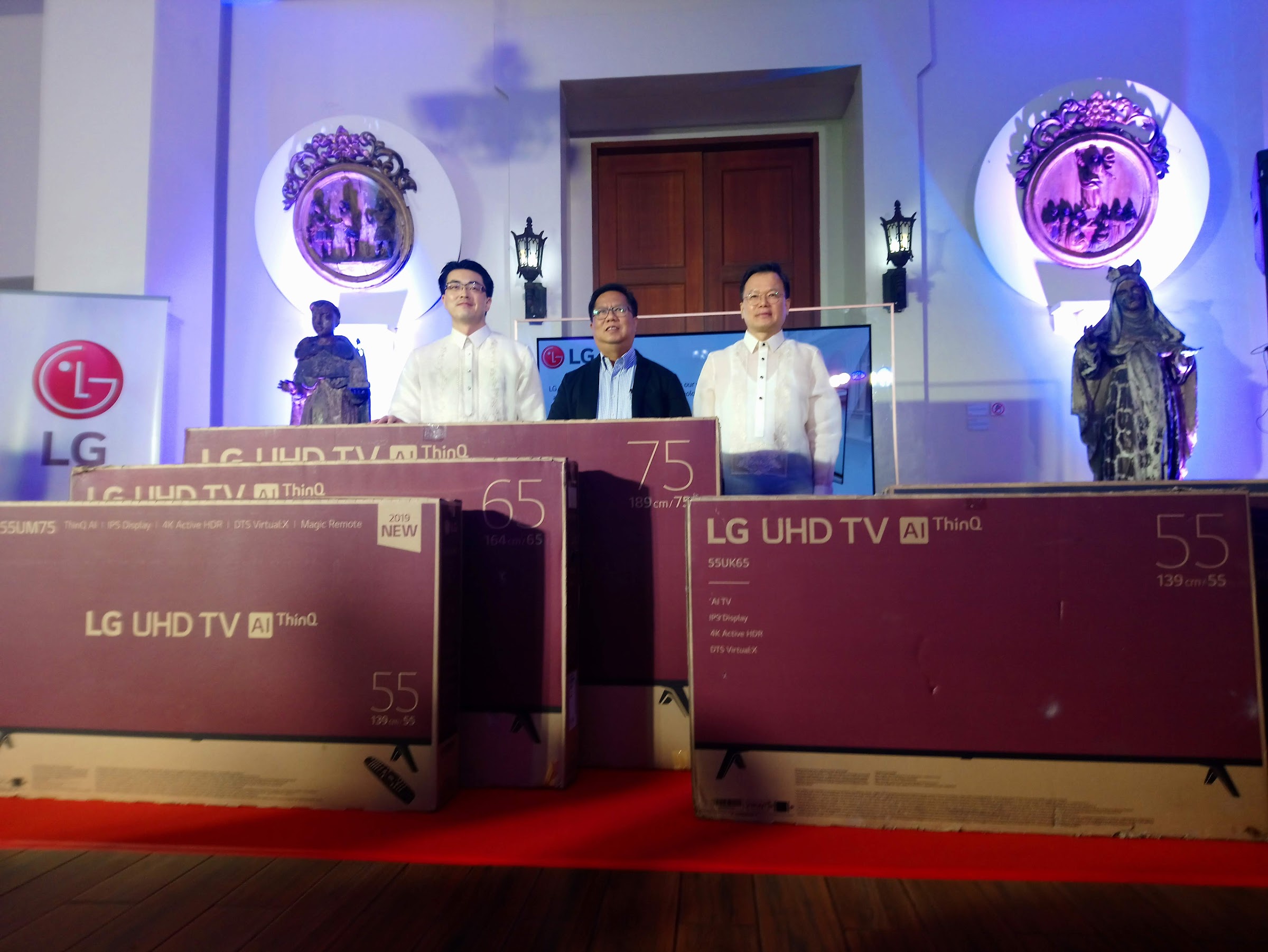 To show its support in adding a creative touch on how Philippine history is showcased, LG Philippines donated 6 units of its TVs to the museum.

” This 2019 marks the 70th Anniversary of diplomatic tie between Philippines and Republic of Korea.  Throughout the seven decades of friendship between the 2 nations, we’ve been championing the importance of culture. We at LG Philippines remain committed in doing our part to preserve and showcase Philippine history. We hope that through the integration of our industry-leading OLED TV technology with riveting historically significant content, we are able to communicate to audiences, both old and new, the importance of Intramuros and Philippine history as a whole.” 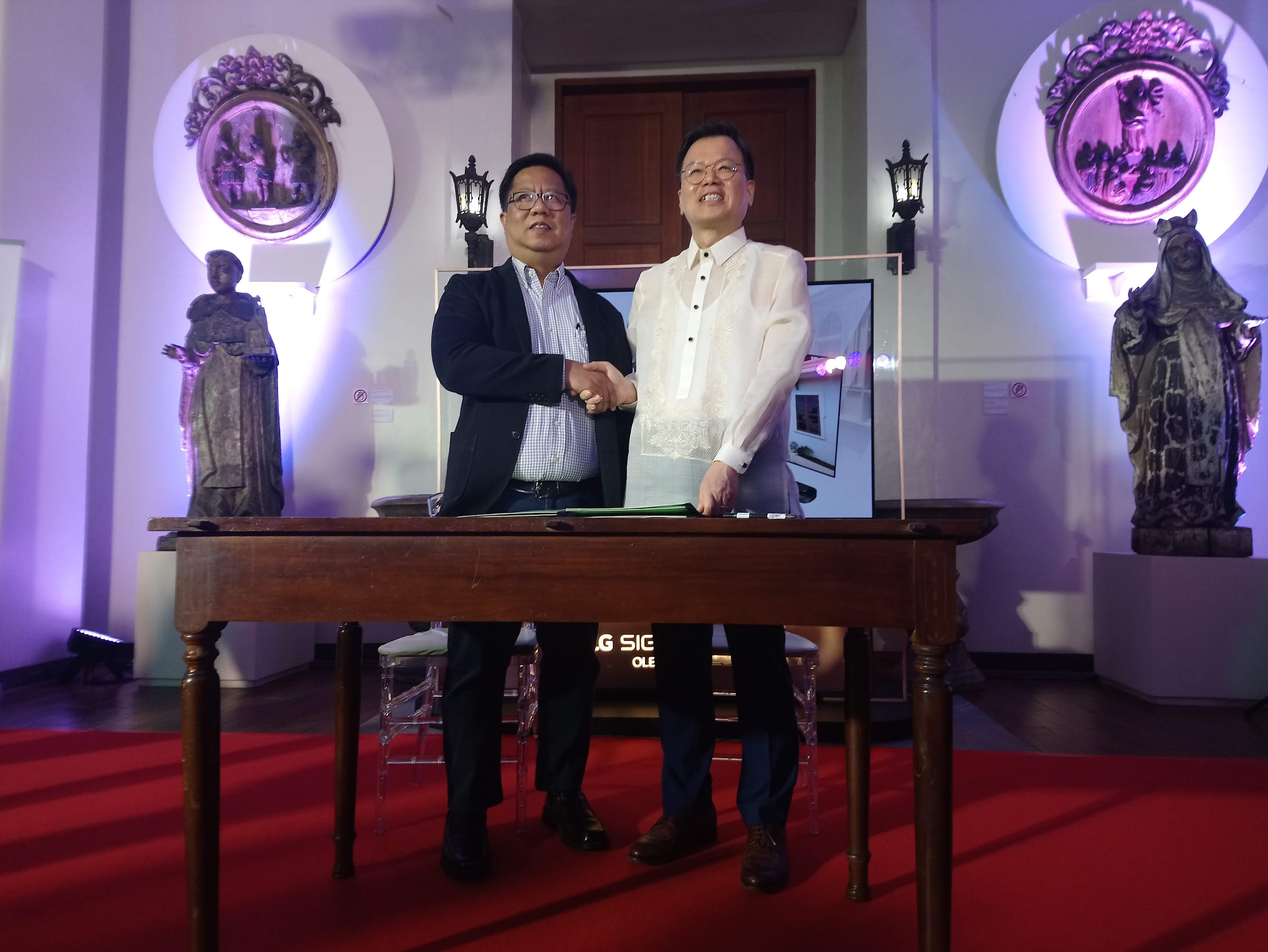 This is with close collaboration with TBA Studios, the folks behind the hit films Heneral Luna and Goyo, a special AVP was also made for LG, featuring the Museo de Intramuros.  Director JP Habac and Cinematographer Pong Ignacio from TBA were personally awe-struck with how vivid the color rendition is on the LG OLED TV. 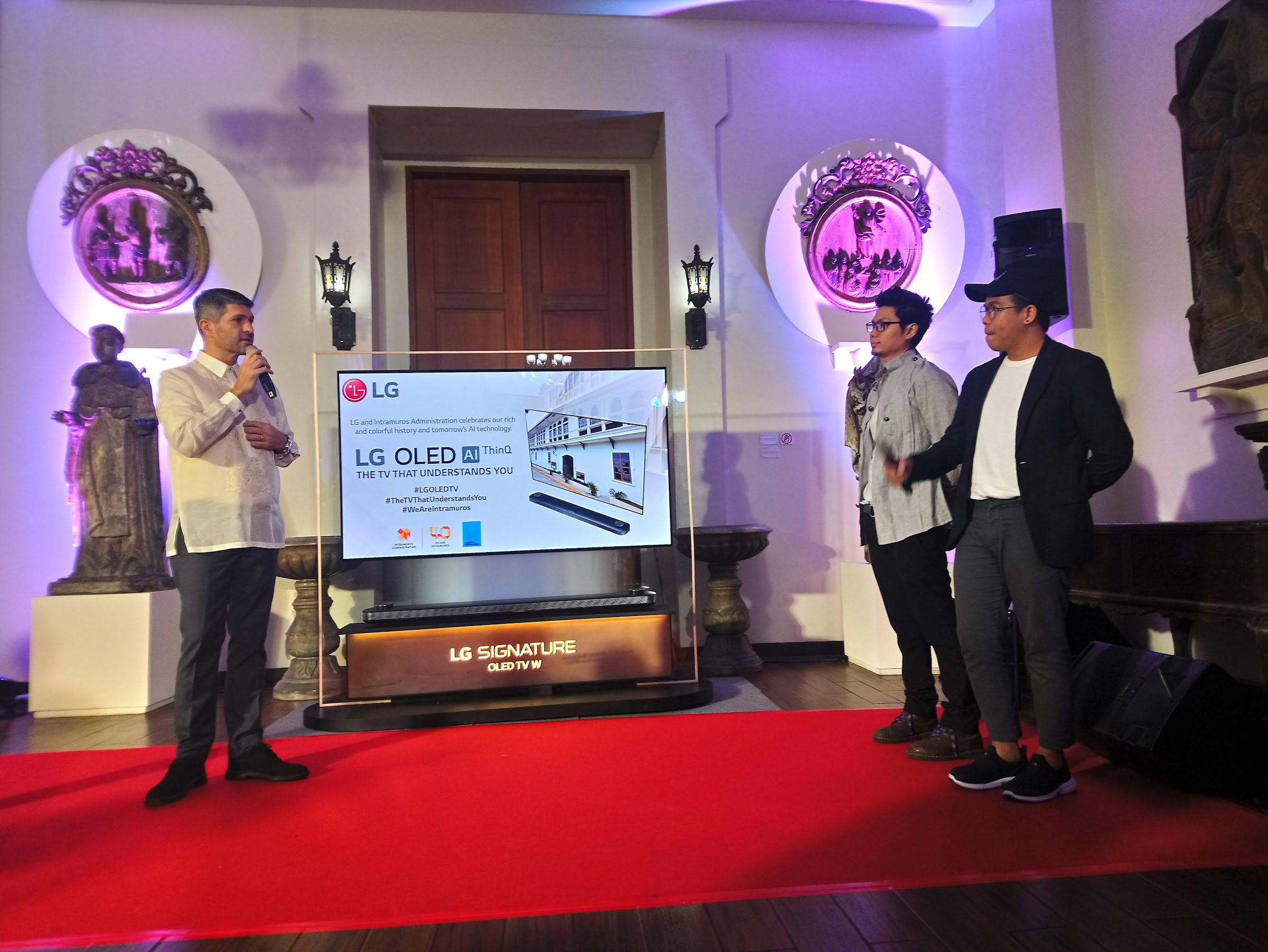 “Every bit of detail is seen the way it’s supposed to be seen. The dynamic range is really something to behold.”

LG’s newest line of TVs is powered by deep learning technology now embedded in the new a9 Gen2 and a7 Gen2 processors. This allows the TV to dramatically optimize both visuals and sound for every content. 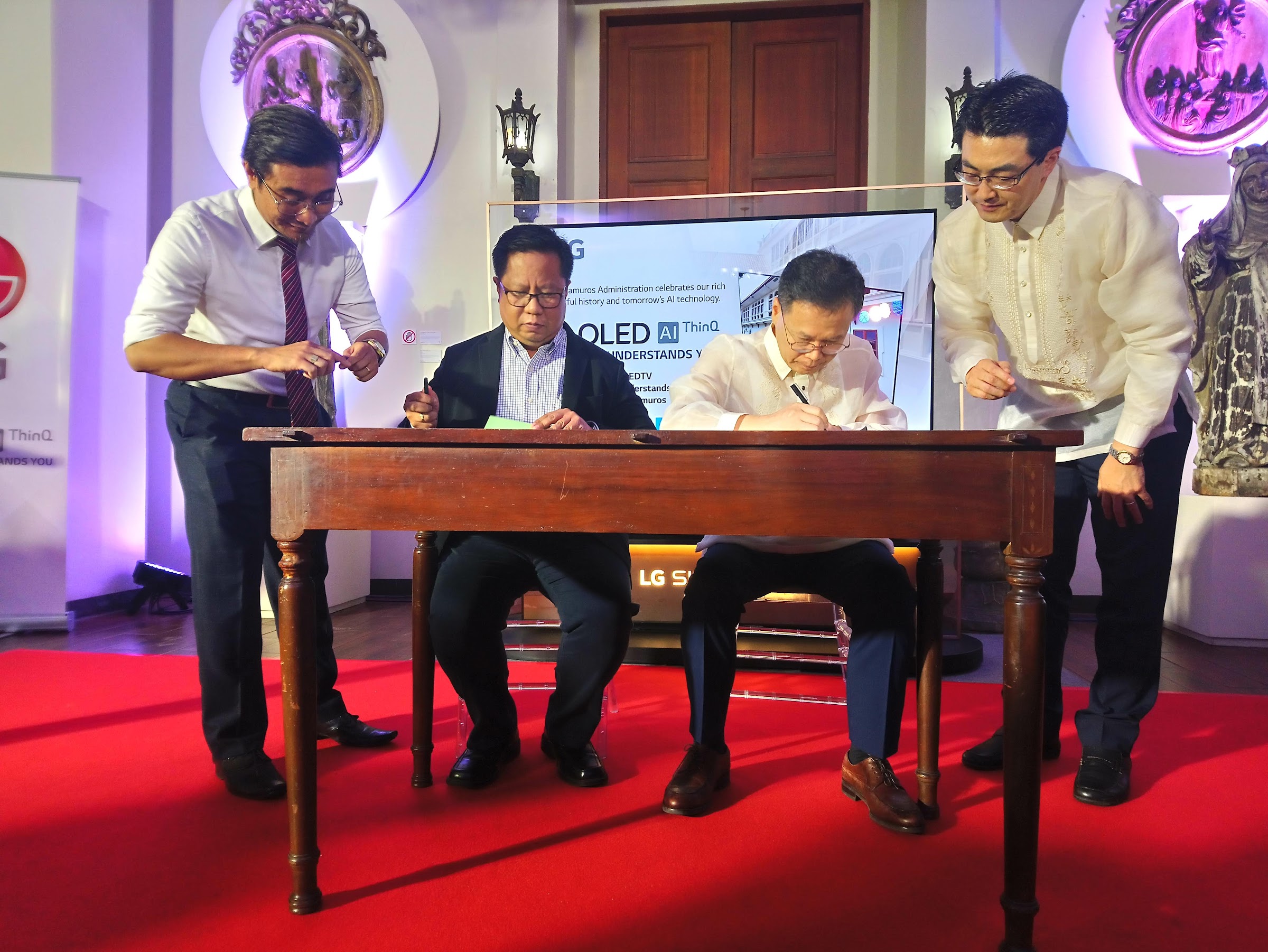 You can now talk to your TV by pressing the microphone button on the remote. LG’s ThinQ AI listens to your commands and executes them, even those based on earlier conversations. Tasks range from simple TV controls, to weather-related questions, and even follow-up questions based on your initial command. 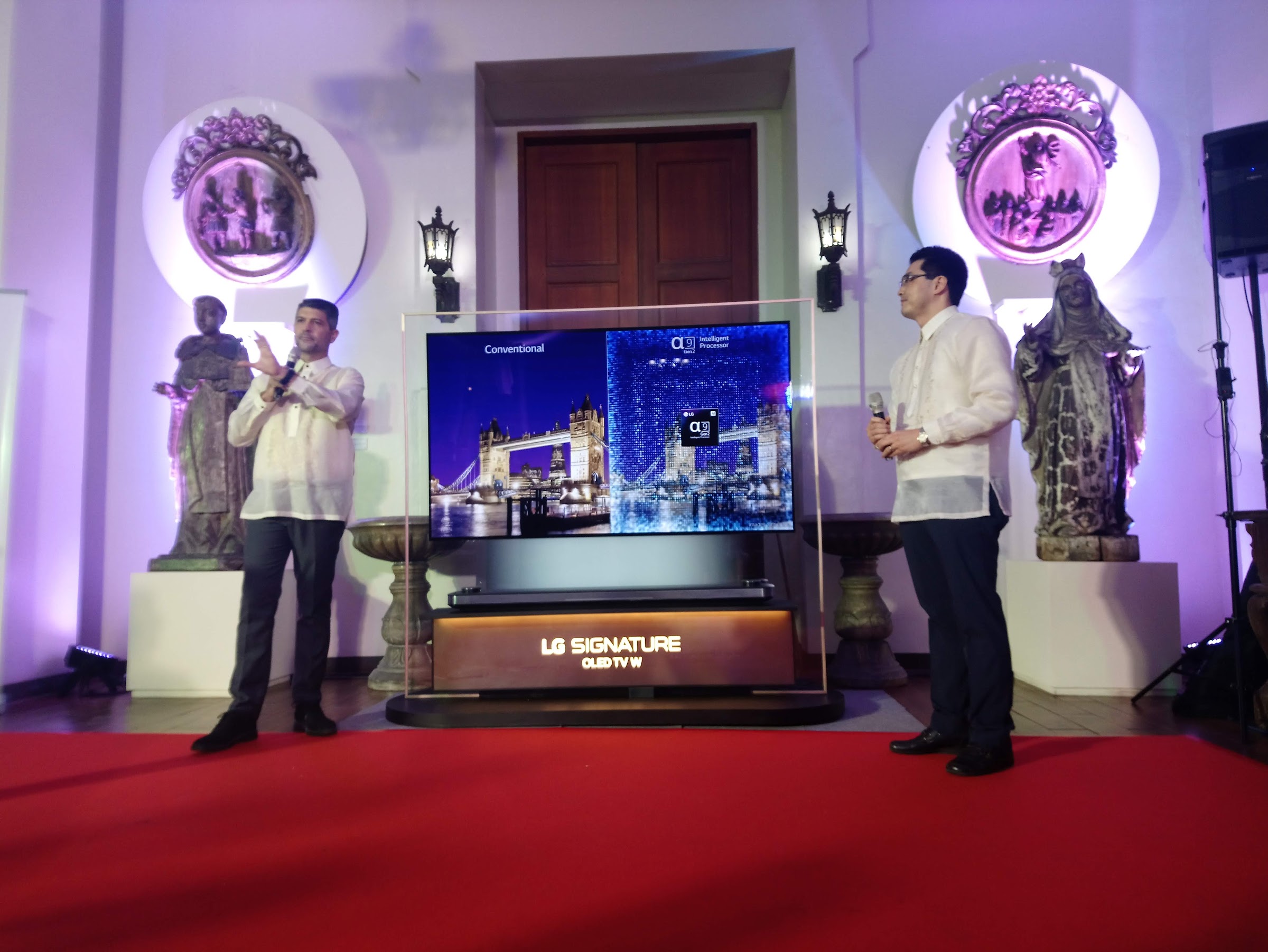 “This is as smart as smart TVs can get. LG is ahead of the game in pushing the boundaries of innovation and technology.”

The flagship model uses an award-winning OLED Panel Technology that works seamlessly with Deep Learning Technology. On the other hand, sound is boosted by an intelligent algorithm that can mix up two channel audio, delivering 5.1 virtual surround sound. 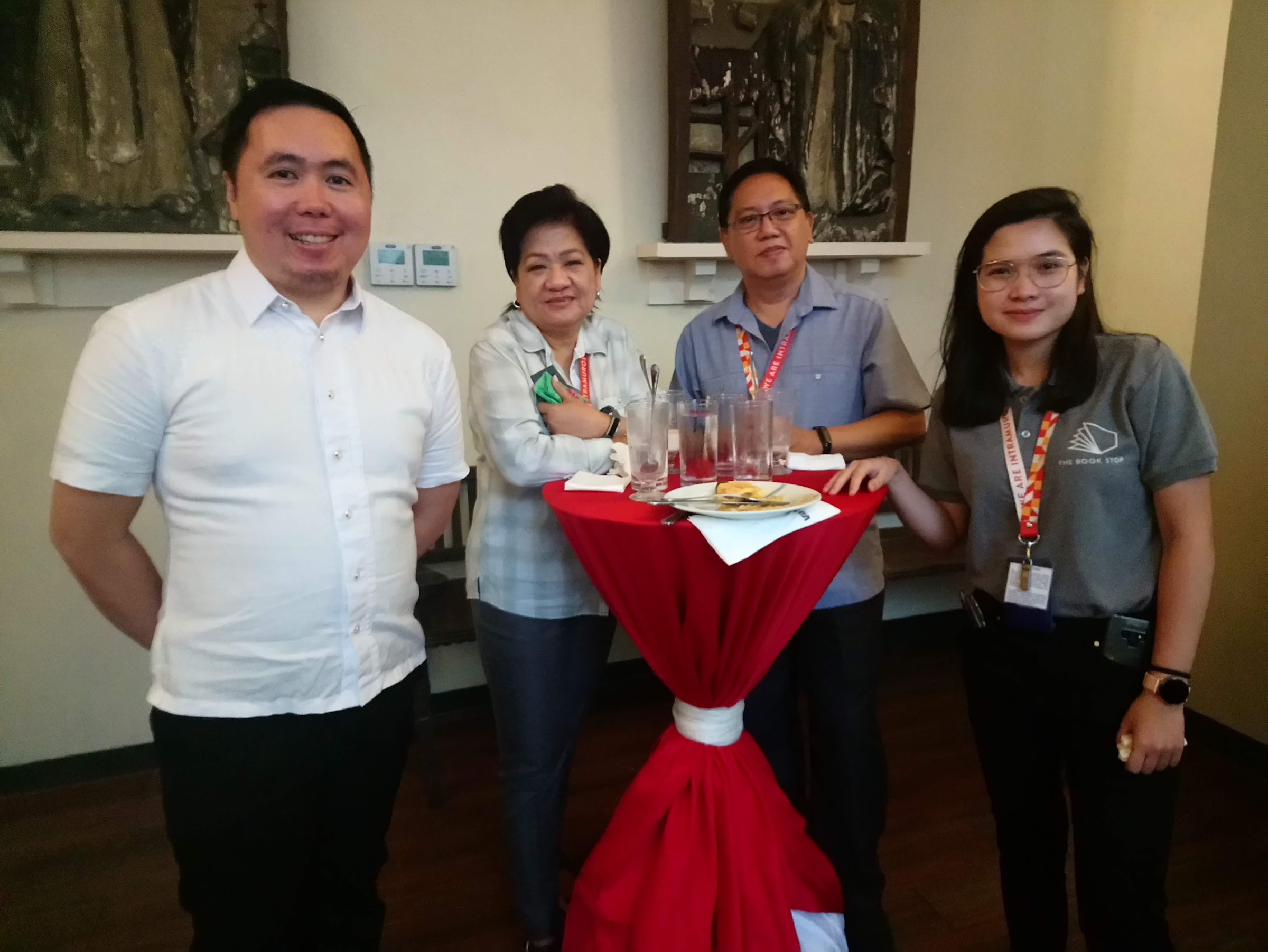 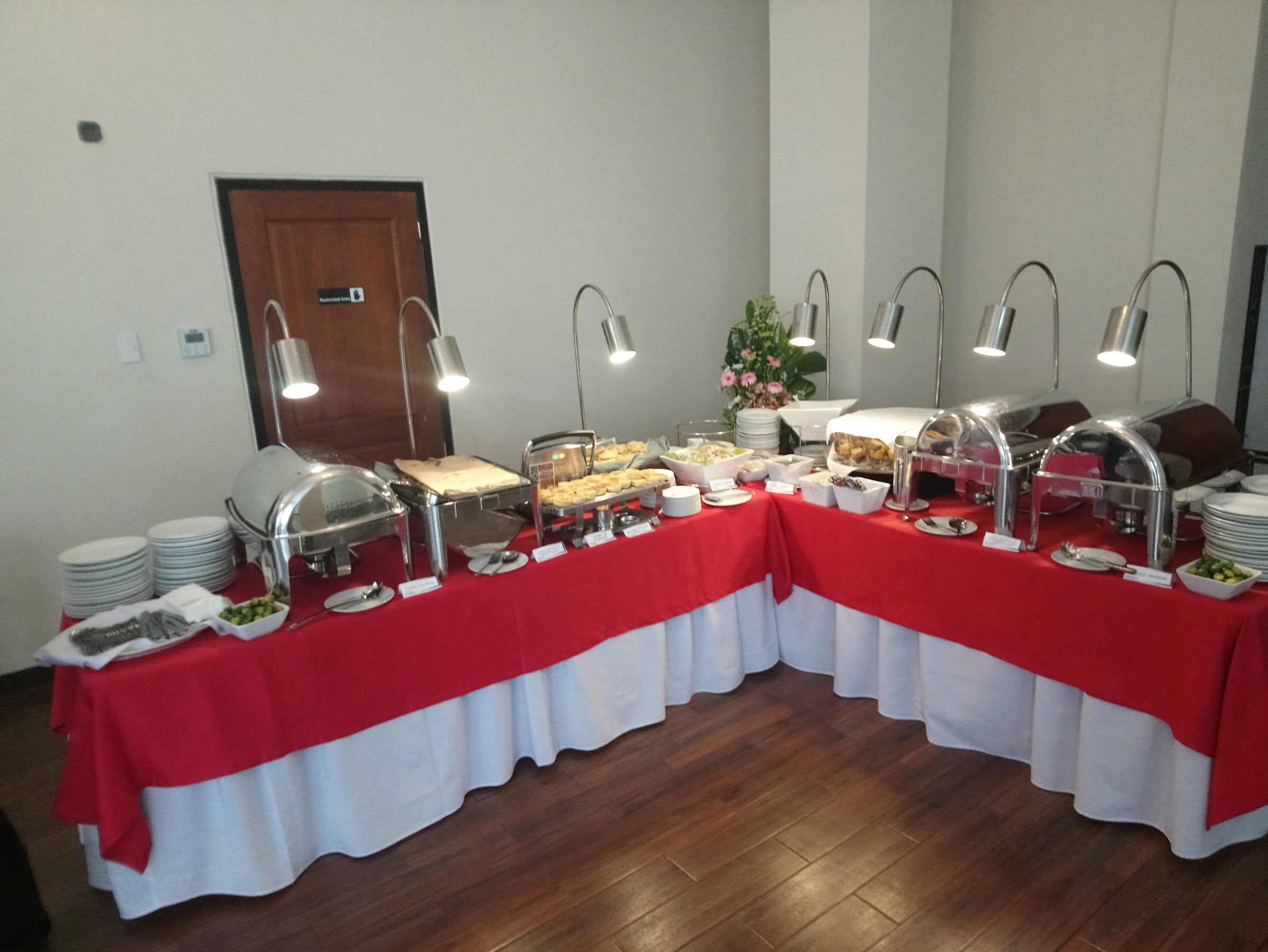 With LG’s flagship OLED TV, the company takes another step ahead in their vision of a truly interconnected smart home.

WorldBex 2019 is not just for industry practitioners, students, engineers, architecture and business opportunities. The exposition is also a haven for those art lovers, heritage advocates and a whole of of information are express thru numerous galleries.

11.) Hurricane Industrial Energy– The company had large industrial fans which can be installed in factory, buildings and churches.

6.) Bobi Toys Gallery – People will notice that the wooden toys that the company had manufactured over the years. They have never go out of fashion despite the arrival of  plastic and more popular toys.

5.) China Gallery – There are dozens of manufacturing companies from People’s Republic of China selling different kind of products , services and items.

4.) Projecto 2019 – Architectural design competition by students from different colleges and universities like Mapua Institute of Technology, TIP among others.

3. ) Architectural Firm Gallery– Different projects and design concept by some of the leading architectural firms of the country.

original plan for Our Lady of EDSA Shrine

WorldBex 2019 is until March 17, 2019 .There is a FREE shuttle service, which ply the World Trade Center and SMX Convention Center.

Kuya Kim Atienza also recounted on how he started his television career starting with Muscles in Motion aired on RPN channel 9 in 1987.

He had been the product endorser for the Baron antenna for the past 3 years. he first endorser was the late weather, radio and television personality Ka Ernie Baron.  Adtel also had Kent Health care water purifier for sale. Kent purifier had several local and international certification.

“Magandang hapon sa inyong lahat, my fellow practitioners in media, all the bloggers and vloggers present today; I  like to say that in my 3 years being endorser of Baron and Kent, eto ang PINAKA-WELL ATTENDED NA PRESSCON SA LAHAT.” Kuya Kim Atienza.

The event ended with several mainstream media, bloggers and vloggers who went home happy with some exciting raffle items like water purifier and antenna.

Manila International Auto Show 2017 ( MIAS 2017) opens its  doors to the general public . The opening ceremonies started a bit late past 10:30 am with a ceremonial opening and a modern dance production.

This year’s theme  “Beyond Performance”, MIAS aims to serve as a venue to highlight the various feats automakers have done to further enhance their vehicles to be able to deliver to the driver and passenger that exhilarating experience they so deserve.

There are several thousands of visitors and participants at the opening , which never failed to amaze first timers. There are something new to see at the exhibition site.  There are nearly 200 participating companies from the automotive sectors, 500 exhibitors and 400 car display units in the show’s 30,000-square meter exhibit area. Last year, the annual affair gathered about 110,000 participants.

8.) Ford Philippines had their Ford Island Conquest program launched a few minutes after the opening ceremony. They are the first car company to host their project. The public had also a chance to test-drive the latest models.

7.) Subaru launched the 2017 Impreza is the first of upcoming Subarus which will ride on a new architecture platform called the Subaru Global Platform, set to underpin all future Subaru models. Subaru also adds that the new platform focuses on economy, comfort and safety rather than overall performance. The platform also promises to bring “Enjoyment and Peace of Mind“.

6.) DieCast Collectors Philippines (DCPH) members exhibited some of their miniature die cast car collections and limited edition at a gallery of at least half a dozen glass display stand. Their exhibit is located in between World Trade Center and PTTC walkway. Although the collection is not that many compared to the past editions of MIAS.  The collectible die cast cars gallery still attracts considerable number of people.

They can also join the RC (remote control) drift race event, Tamiya 4WD race event or even do some Driftbox go-karting with friends and family.

.5.) Motolite  Aside from free coffee and freebies items . Motolite had been revolutionizing Filipino lives by having a futuristic theme at their booth.

4.) Jetti Petroleum had exciting games in store for the visitors . One can throw 3 pieces of ball and try to shoot them at a traffic light . Lucky ones can win prizes like gas or diesel coupon . Their booth is locates at  East Wing A which is in between WTC and PTTC.

a participant throws ball at the traffic light

There are vintage car photos and friendly staffs would greet each visitor to their exhibit booth.

2.) Police Community Relations Group( PCRG) – Philippine National Police (PNP) booth had their customize tricycle like those in MAD MAX Fury movie.  Friendly police officer will greet and give some handouts .

The Automobile Association of the Philippines (AAP), on the other hand, stages their annual Driver of the Year gala awards night, which distinguishes the  country’s top drivers in various motor- sport disciplines.

There are also daily activities like talks , car test driving and exciting competition .

Shopee is one of the country’s fastest growing mobile shopping app in Southeast Asia and Taiwan , recently conducted their 23rd Shopee University , a FREE training workshop that helps online sellers grow their Shopee business and increase their sales , with over 170 participants from Metro Manila and nearby cities.  The event took place at Hive Hotel and Convention Center it is the 10th time to be hosted in Metro Manila and 3rd time in Quezon City .

First introduced last year ,Shopee University has recently traveled to twenty cities around the country and has helped over 1,000 aspiring Filipinos online sellers . Topics includes extensive training on how to be a better entrepreneurs by leveraging on the apps’s tools and features . Learning practical tips on running a business whether they are new or veteran online sellers.

“Through Shopee University , we can encourage our sellers and help them scale their business in a multi-pronged approach that includes marketing , customer relationship management and visual merchandising , among others under the tutelage of Shopee trainers” said Ms. Macy Castillo – Shopee’s Head of Commercial Business.

This Year, Shopee University aims to travel to more areas around the country to meet and educate more online provincial sellers , especially in major cities in Visayas and Mindanao.

” Our sellers are the heart and soul of Shopee and we are happy that we can be their partner on the success of their business ventures. We aim to continually enhance our platform and our user’s experience to become the region’s mobile commerce destinations of choice ,” adds Castillo.

Shopee is a leading mobile -first marketplace in Southeast Asia and Taiwan where everyone can browse , shop and sell. It is a platform tailored for Southeast Asia , making online shopping easy , secure and fuss -free through its strong payment and logistical support.