This will also coincide with “National Stamp Collecting Month” and to honor the distinguished careers of Mr. Joey “Pepe” Smith, Rico J. Puno and Rene Garcia of Hotdog that transcend generations and continue to resonate with music fans of all ages.

The Pinoy Music Icons stamps of Smith, Garcia and Puno was designed by PHLPost in house creative artist Rodine Teodoro as part of PHLPost’s celebration for National Stamp Collecting Month and 252 Years of Postal Service. 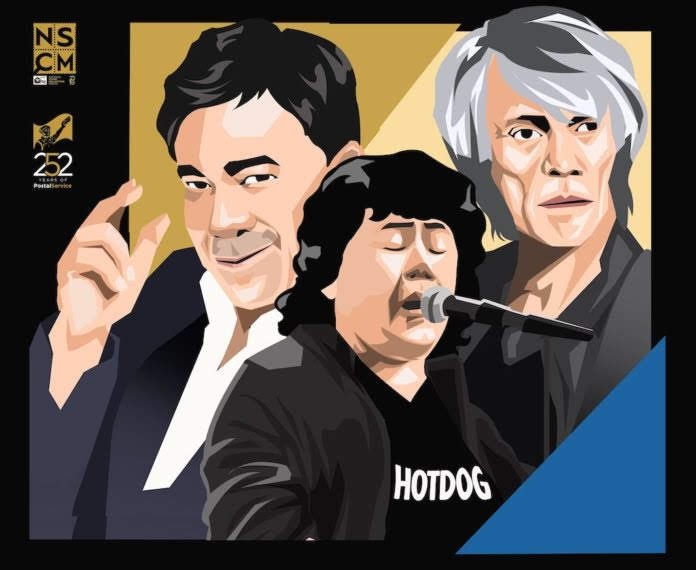 In other countries like the United States have issued stamps to honor their music icons like in 2013, the Music Icons series in the US have honored popular music artists such as Elvis Presley, Janis Joplin and John Lennon.

Regarded as the face of Pinoy Rock, Pepe Smith helped pioneer the OPM sub-genre as a member of the classic line-up of the Juan Dela Cruz band together with Mike Hanopol and Wally Gonzalez. A highly influential figure in the local rock scene, Smith was the voice behind iconic hits like “Himig Natin,” “Beep Beep” and “Titser’s Enemi No. 1” and was actively performing until his untimely demise.

Dubbed as The Total Entertainer for his ability to wow audiences in every show he headlined, Rico J. Puno was also an exceptional balladeer who occasionally strayed into rhythm and blues territory. Distinguished by his husky, baritone vocals, Puno was responsible for some of the most iconic OPM classics that include “Kapalaran,” “May Bukas Pa,” “Lupa” and his signature song, “Macho Gwapito.”

The families of the three icons were likewise thrilled with the idea of their kin being honored with commemorative stamps.

As part of the stamp’s launch, PHLPost will mount an exhibit of memorabilia items from the three icons courtesy of their respective families. The exhibit will take place also this November at the Manila Central Post Office building in Liwasang Bonifacio, Manila.

Dr. Lisandro Claudio is an associated professor at Ateneo de Manila -Department of Political Science .  He obtained his PHD at University of Melbourne , Australia . His areas of specialization ,The Philippine Left, Global Marxism, Postwar Philippine Intellectual History, Post-authoritarian Politics in the Philippines, The Global South.

Due to time constraints , I only managed to asked him if he knew  Dr. Corazon Claudio, Chair and President of EARTH Institute of Asia, She had a radio “Kalikasan, Kaunlaran”, DZRH-TV where i was invited a few years ago .  I did not got a definite answer since i forgot her first name.

The book is available at the Ateneo de Manila University Book Press Office.

He is best known as the author of “12 Little Things Every Filipino Can Do To Help Our Country.” The book is distributed in all National Bookstores branches

Mr. Hubert Fucio is a book illustrator , Grand Prize Winner of PBBY Alcala Prize in 2003. One of his latest  book illustration ” Anong Gupit Natin Ngayon” . Among his works are”  Si Pagong at si Matsing” , ” Sandosenang Kuya”   the books were printed by Adarna Books.  While Lauan, the Seed that Wanted to Fly by Rhandee Garlitos, illustrated by Hubert Fucio was printed by Vibal Publishing . ” Children of Two Seasons: Poems for Young People”  written by Lara Saguisag and illustrated by Hubert B. Fucio

National Historical Commission of the Philippines

She is the author of  ” Autum in Madrid ”  printed by UST publishing house. It was her second book of travel essays  and was launched last  June 8, 2013 at Greenbelt 4, Makati.

Sun-Cua’s previous works include “Riding Towards the Sunrise,” which won the National Book Award for Travel in 2000; “Charted Prophesies and Other Poems” (2001); and two collections with the ALON collective, of which she is a founding member: “What the Water Said” (2004) and “Watershed” (2009). She is also an obstetrician-gynecologist currently affiliated with the San Juan de Dios Hospital, and lives in Manila with her husband Alex.

He started his career as a journalist and writer 23 years ago at the Manila Standard and The Manila Times. After which he leaped from newspapers to magazines, having worked as managing editor for the Philippine Airlines in-flight publication Mabuhay and Filipino Unlimited, and as executive editor of People Asia.

His stint as media bureau chief at the Philippine Senate and as communications management consultant for some members of the Lower House . Mr. Salud has written for various national publications, including the Philippine Star, Star week, Balikbayan, Lifestyle Asia, the Philippines Free Press and Business Day.

He now saddles his pen as Editor-in-Chief of the Philippines Graphic magazine, the country’s top newsweekly and literary publication under the ALC Group of publications, which includes the Business-Mirror.

He is a member of the Unyon ng Manunulat sa Pilipinas (UMPIL) and the Manila Critics Circle.

His latest work , The Distance of Rhymes and Other Tragedies was printed by UST publishing.

Mr. Jaypee Reyes  at the C& E Bookstore  booth . For a minimum book purchase, one can have a FREE handwriting consultation. He is the current President and CEO of Handwriting Master Analysis of the Philippines ( HandMAP)

I quickly notice his presence at the C& E booth because of one hobby that connects our group (Handwriting !) Being a stamp collector( philatelist) we always promote the art of writing letters . Some of the older members of our stamp club would collect letters purposely because of their  beautiful handwriting. or Calligraphy . Some teachers and even stamp collectors would develop some attributes to know one’s personality thru their penmanship.

The Museo ng Katipunan or Katipunan Museum located in San Juan City formally opened its doors on Tuesday morning. It was built to showcase the contributions of the members of the Kataastaasang Kagalang-galang na Katipunan ng mga Anak ng bayan (KKK). The group was founded in 1892 as a movement against the Spaniards.

The Museum was built at a former Spanish depot site called “El Deposito”, and features relics of weapons, dioramas, amulets used by the Katipuneros. It also houses some notable pieces of art from Pancho Piano.

So why San Juan and not Intramuros, Manila?  National Historical Commission of the Philippines’   Executive-Director Ludovico Badoy said  the Katipuneros organized their first raid at the Spanish weapons and ammo dump located in San Juan.

Atty. Gregorio Bonifacio, a fourth generation blood relative of the Katipunan founder, said the museum is a fitting memorial for the KKK.

This is a new museum entirely devoted to Bonifacio and the Katipunan, with interactive displays and original Katipunan artifacts. The museum will also present, for the first time, an initial list of members of the Katipunan and others who supported its cause, numbering more than 2,500. The names were obtained from archival sources.

The museum also has an e-learning room where students from grades 5-7 will take online interactive lessons about Bonifacio and the Katipunan—the first in the country—produced by the NHCP. Classes will start at 9 a.m. and every hour a different batch of students will use the room.

Liwasang Bonifacio  also called  as Plaza Lawton is this year’s venue of the historic flag raising activity for the 115 anniversary of the proclamation of Philippine independence.  The entire plaza had some clean-up drive several days before the event which included cleaning the fountain area ,  installation of new plant boxes, trimming of trees and putting of yellow ribbons  within the vicinity .

Ambassador Harry Thomas is his final leg of his tour of duty in the Philippines.  Based on the photo opportunity requests by the ordinary people , He is one of the most well-loved ambassadors in recent memories . His ability to speak Filipino language makes him an instant click to ordinary people .

The Manila Central Post Office is an architectural jewel that is found in the middle of the old capital city ( Intramuros ) and Extramuros ( Binondo ) .The historical building was built in 1926 almost the same time with the National Arts Gallery ( National Museum ) by triumvirate Architect Juan Arellano , Ralph Duane and Tomas Mapua .  The upper floors were draped with Philippine  ceremonial tri-color cloth  . It adds a touch of class and formality to the event.

President Benigno Aquino III  led the country in commemorating the 115th year of its proclamation of  independence from Spanish colonial rule.

President Aquino together with Dr. Maria Serena I. Diokno during the wreath laying ceremonies at the Bonifacio statute in the middle of Liwasang Bonifacio

This also marks the kick-off event of the year-long anniversary which will culminate on November 30, 2013 with festive ceremonies ,  fun run , Bonifacio trail , art competition , exhibits  and stamp launching event .

After the flag raising ceremony and independence day speech . President PNOY went to the holding room E-Post Shop within the Philippine Postal Corporation building .  Due to security protocols  , only 2 official press photographer from the ( Office of the President ) and NHCP  were  allowed .

This according a  Malacañan protocol officer , It was a private function – He was presented with the 150th Malacañang Palace framed stamps and First Day Covers together with Alfredo S. Lim .

He probably stayed for about 10 minutes inside before leaving .  Then our group was invited by Postmaster General Maria Josefina dela Cruz for an early lunch .

The event is spearheaded by National Historical Commission of the Philippines , Philippine Postal Corporation ,   Department of Public Works and Highways , Metro Manila Development Authority , Office of the President and  City of Manila.

Note: I would like to ” Thank” NHCP , Philpost and the City of Manila for all the accommodation given to me during the event.

National Historical Commission of the Philippines in cooperation with Philippine Postal Corporation invites the public to participate in the stamp design contest. the winning entries will be featured in time for the 150th commemoration of the birth of Gat Andres Bonifacio .  There will be two category 1.) OPEN Class 2.) Student  . For more information please visit the website . The theme ” Dangal at Kabayanihan ”

National Commission of the Philippines: http://www.nhcp.gov.ph/