Cymbidium finlaysonianum is one of the native orchid species which never fails to disappoint us. This specimen clump had been with us for more than 25 years. This was bought by my mom in the early 1990’s from an ambulant vendor selling her last few stocks of orchids. 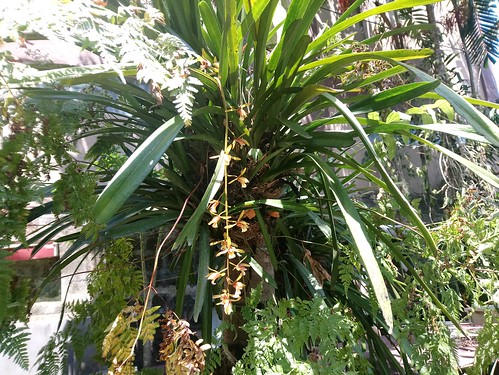 This orchid was first grown on a driftwood during the first 5 years after my mom brought the orchid home. When the driftwood rotted away. We decided to tie the orchid on a Melia azedarach (Paraiso tree) growing in our backyard. This orchid spend at least 15 years or so mounted and flowering every year. When the tree died sometime in 2010. We re-attached the the large one on to a Manila palm ( Adonidia merrillii) sometime around 2011. It took more than 2 years before the main orchid started to bloom again. The flowering season for this orchid species became erratic ( it may be due to the change in growing condition) until a couple of years ago, when it would bloom at least once a year. We have given some divisions to  neighbors and friends, but unfortunately most of the divisions that we gave died out in their collection. 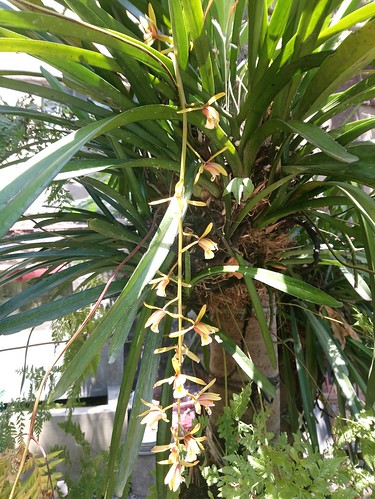 This particular orchid had a compact growth habit and would have small flowers compared to other Cymbidium finlaysonianum that we have in our house. This species blooming season is from March to May, but sometimes this can bloom late February or early June depending on the weather pattern.

A short drying period is necessary for the orchid species to initiate flowering. In our case, Some of our orchid clump would flower twice a year after a short dry season and after the rainy season. 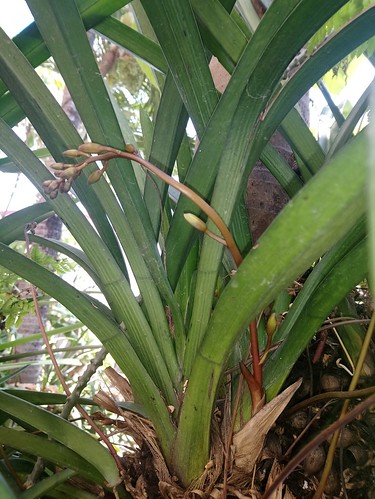 This orchid had rewarded us with two spikes ( 19 flowers) and ( 15 flowers) before the first spike had faded away, the second inflorescence started opening. Due to the intense heat, Most of the flowers do not last more than a week. There is a third spike which is expected to open by Easter. 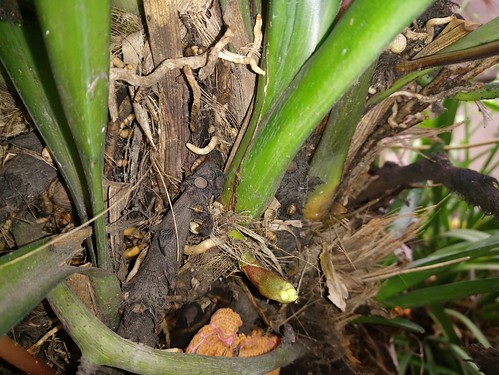 I have seen some blooming -sized orchid planted in pots at the backyard of my aunt during my kindergarten days. She bought some of her orchids from ambulant vendors way back in the late 1980’s while some was brought from the province. This was some sort of a “BIG Event” in her house whenever these orchids were in bloom. Most of her orchids were grown on big earthenware pots and can be brought inside the patio area for easier viewing.

This would rival Epiphyllum oxypetalum (Queen of the Night, Queen for a Night, Dutchman Pipe ) whenever the plants were in bloom.

This orchid species use to be commonly cultivated in many houses within the subdivision that we live. Most are left untouched by the owners which were grown attached to coconut palms, manila palms, caimito, duhat, jackfruits and driftwood.

Unfortunately, New generation home owners would prefer orchid hybrids or other flowering plants. Some older residents which grew tried of growing them would neglect the orchids and a lot of them would end up dying. 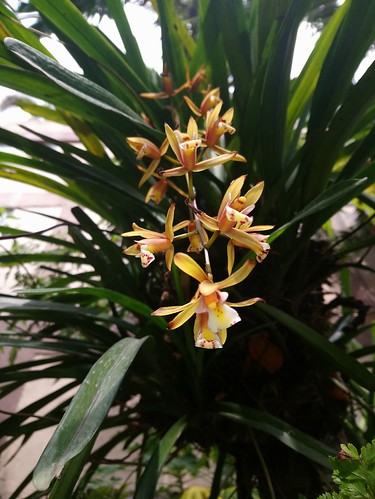 Cymbidium finlaysonianum flowers are smaller than the usual form. a big one is only 1.5 inches across ( about 4cm) this one had a flower spike of 26 inches long.

Initially thought that this was Cymbidium pubescens or Cymbidium bicolor, until few years ago when i have shown some flower samples to fellow orchid hobbyists and collectors. They told me that this is the compact type Cymbidium finlaysonianum or small flowering size ones.

Cymbidium finlaysonianum is the most widely distributed of all the Cymbidium species and it has been recorded from India, Myanmar, Thailand, Vietnam, the People’s Democratic Republic of Lao, Cambodia, Malaysia, Singapore, throughout the islands of Indonesia, Borneo, Maluku, Sulawesi, and throughout the Philippines.

Cymbidium finlaysonainum is found elevations around sea level to 1,300 meters in lowlands to mid-level altitude.

There are some color variations in this species, While the highly prized Cymbidium finlaysoniamum variety flava sometimes called variety alba . Is seldom seen in cultivation. 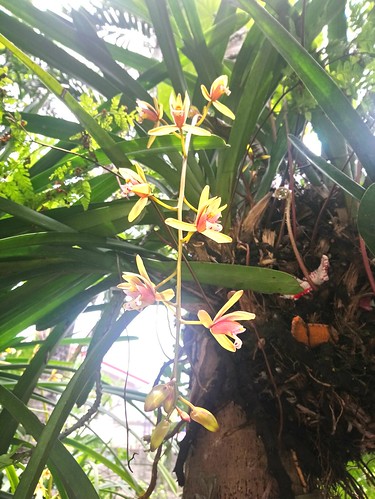 Most of our Cymbidium finlaysonianum orchids are grown attached to living palms and on forks of trees.

Fertilization should only be done during the active growth periods, normally 2 weeks after blooming. We would use water soluble fertilizers at 1/4 strength of what is on the label usually 20N-20P-20K every week.  Applying some calcium nitrate, trace elements and epsom salt once every two weeks on very small quantity diluted on lukewarm water, then further diluting them on 10 liters of water. We would water first the orchid early in the morning or late afternoon before applying any fertilizers.

Try to put 25 to 35 pieces slow release fertilize sewn on old cloths then tie them few inches above the main orchid roots. This orchid species tend to be heavy feeders especially during their growing season. ( normally 2 weeks after they bloom- between late March, April to late October) towards late October or early November, We would adjust the fertilizer formulation to ( 10N-30P-30K) in preparation for the dry season.

As cooler weather approaches, reduce watering slightly, By early December, we would decrease watering to two or three times a weeks and stopping the application of any form of fertilizers.

Cymbidium finlaysonianum have evolved water storage organs (pseudobulbs) to withstand periodic, or months of dry season in their native habitats. The larger the pseudobulbs, the longer a period of dryness the orchid clump can withstand. For this reason, it is recommended that plants in cultivation be allowed to go nearly dry in between watering.

We would also flush our orchid at least once every 10 days using ordinary tap water to remove the built -up of salts and other fertilizer residue.

Once a while, we would also water our orchid from rice washings ( hugas bigas), but orchid experts forbid this practice since there are fungus and water mold which would kill the orchid. Hence, we would minimize the use of hugas bigas.

Cymbidium orchids and its hybrids were long sought after orchid in the world. The Chinese were cultivating them long before Jesus Christ was born. Flower arranger and florist would use their large flowers for several occasions.

Some believe that growing them gives them good luck ( depending on the person or ethic group ) One ethnic group in the Philippines uses the leaves of the Cymbidium finlaysonianum as rope or accessories.

A neighbor also believe that growing them within one’s property could deter tiktik from entering one’s house.

Landscapers would also use the beautiful orchids to cling on old trees and palms in big subdivisions , farm , resorts and local parks.

This is also often seen being peddled by Some aetas or ambulant orchid vendors. sometimes misnaming or mislabeling the orchid as Vandas or inserting the orchid with Vanda hybrid flowers or Mokaras.

The Orchids of the Philippines , Jim Cootes 2001