Holy Week is one of the most important event in the Catholic church. One of the most anticipated event at the Christ the King of the Universe parish within Kingspoint subdivision, Barangay Bagbag, Novaliches in Quezon City is the annual Easter vigil. 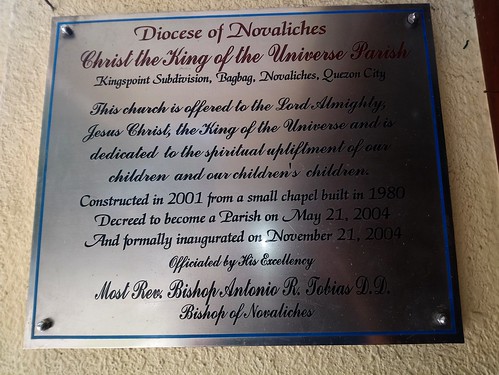 A small chapel was constructed early in 1980. While several minor renovations were made in the late 1980’s. Portion of the chapel was enlarged in the mid-1990’s because of increasing parishioner from nearby subdivision. The present church facade and structure was enlarged in 2001 and became a full pledge parish of the diocese of Novaliches in 2004. 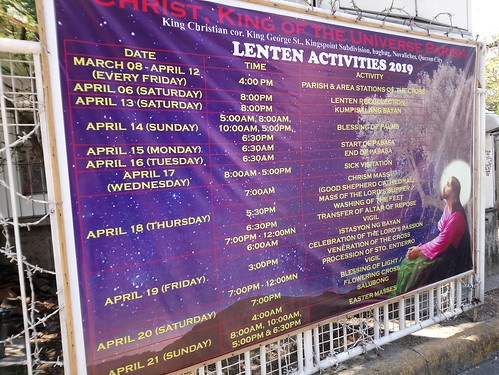 The full holy week schedule was posted at several vantage points within the subdivision and FB page of the parish. Easter day celebrations in the mid- 1980’s and 1990’s were simple. 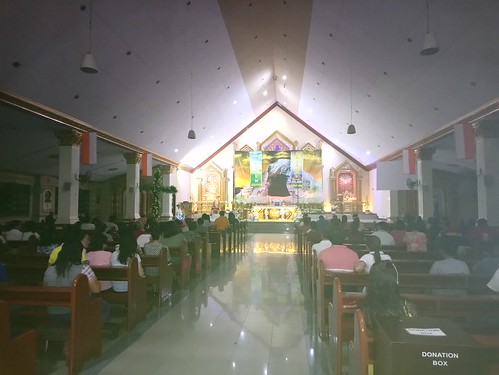 Christ the King of the Universe parish ( vigil rites)

Images inside churches remain draped in purple. The administration of sacraments is severely limited. 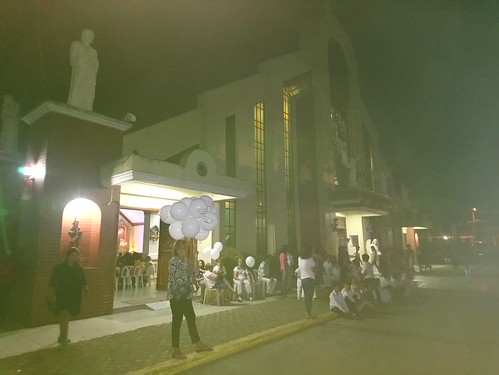 facade of the church

The shift from mourning to joy begins at night with the observance of the Easter Vigil, the third and final day of the Paschal Triduum that began on Maundy Thursday. There was also the procession of Santo Entierro during Good Friday. 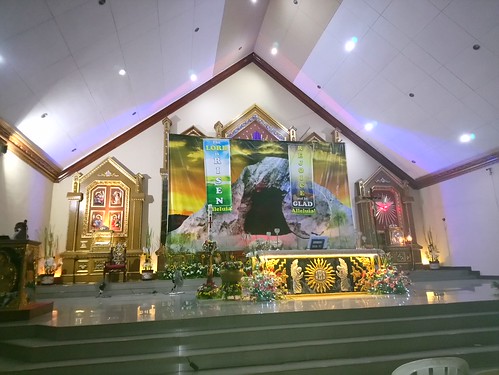 Someone from the parish invited me to the vigil which led up to the reenactment of the Easter day “Salubong”. 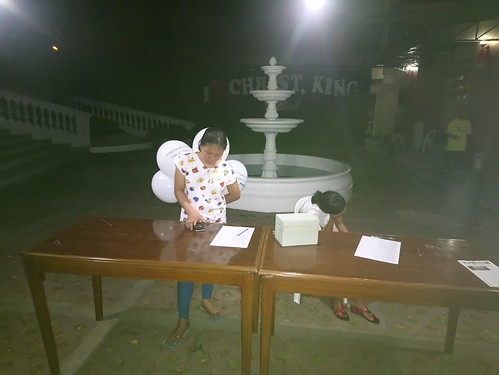 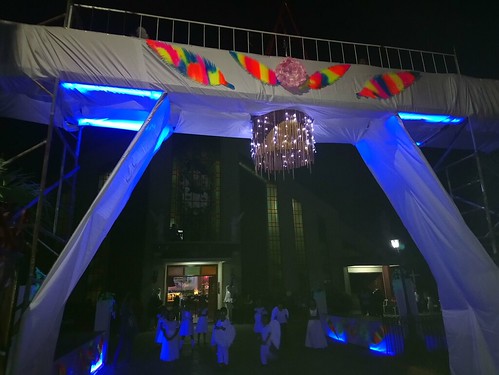 The rite is customarily performed in the early hours of Easter before the first Mass, Which is normally held at around past 4:00 am, while some of the parishioners are already inside the church as early as 3:00am. 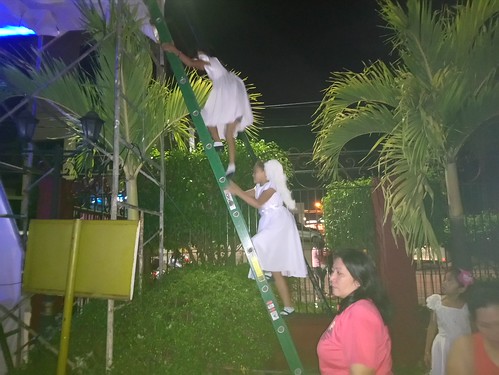 Unlike in Makati or some places, Easter Vigil and Salubong takes place around midnight. Easter day celebration within Christ the King of the Universe parish usually happen early dawn at around past 3:00 am. 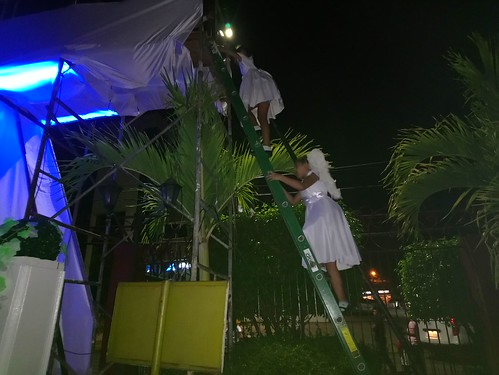 Easter salubong ritual is meant to depict the apocryphal reunion of Christ and his Mother, the Virgin Mary, after the Resurrection. Statues of both are borne in two separate processions that converge at a designated area which is often an open space with a purpose-built scaffolding at the main entrance of the parish. 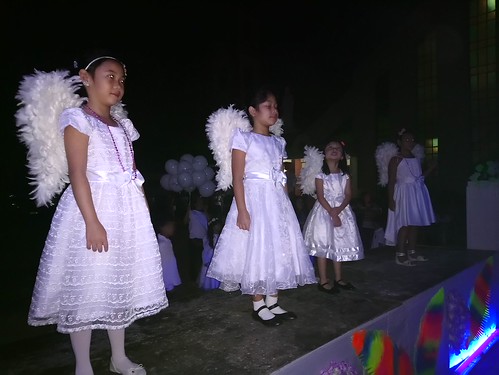 children in white dress and wings

The high point of the easter day rites is the angel dramatically removes the veil from the Virgin’s icon, signalling the abrupt end to her grieving and the period of mourning. The veil may simply be pulled off the statue, or tied to balloons or doves that are released into early dawn rites. With white balloons released at the church. 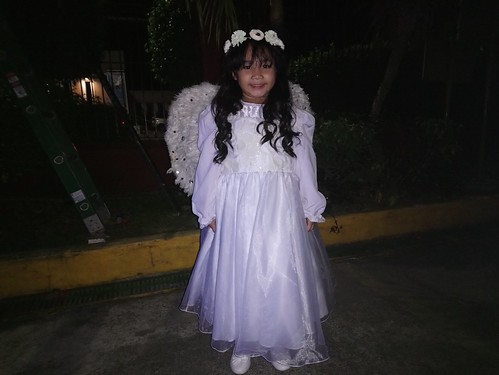 Ms. Jhuie Annika Delagala is is hoisted at the makeshift entrance and was the one who took the viel from the blessed mary. 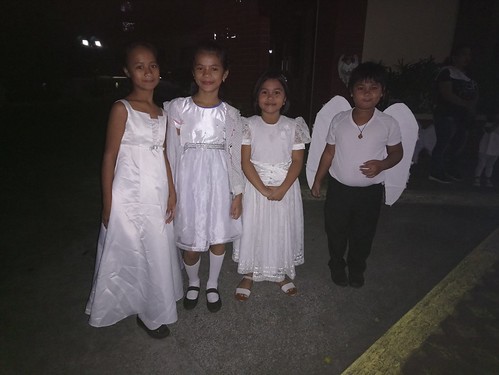 Dozens of children in white dress, with angel wings. While 4 children dress as angels threw in flower petals unto the processional carriages.

start of the easter salubong celebration

The celebrations started with an early morning mass by 5:00 am. The regular mass was celebrated by 6:00 am. 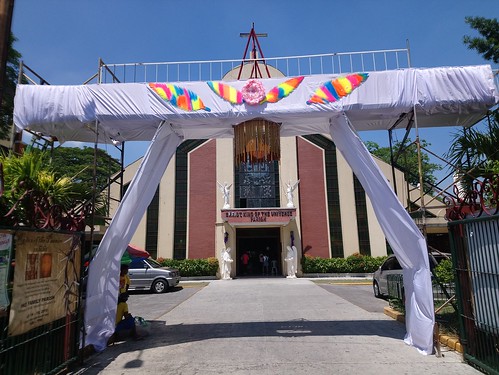 Christ the King of the Universe parish entrance 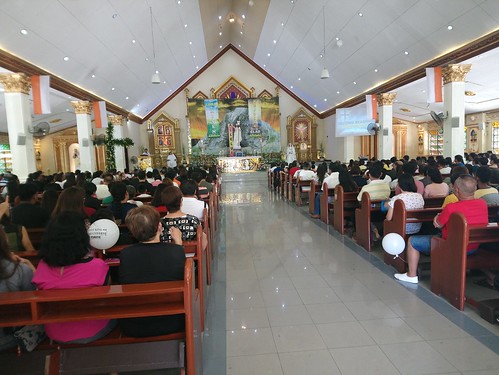 Christ the King of the Universe parish within Kingspoint subdivision is getting elaborate and more parishioner are joining the annual Easter celebrations.