The month of April starts the long dry season in the western parts of the country and the intense heat can be unbearable. But such heat also bring in the beautiful blooms of the April shower tree. 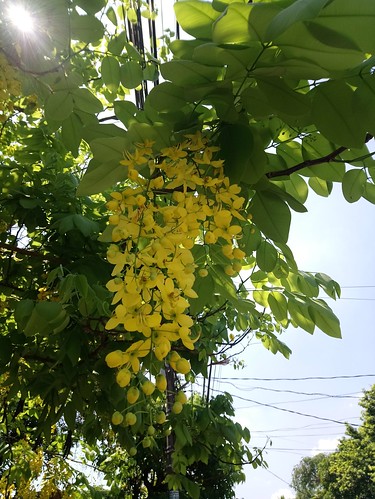 Seeing a lot of trees in bloom within Metro Manila can be a respite and a lovely sight to behold despite water shortages , power interruptions and earthquakes. Yellow colored flowers symbolizes happiness , good luck and getting positive energy. 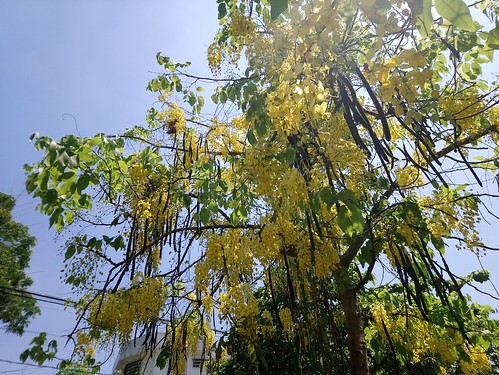 Cassia fistula is commonly known as Golden shower, Golden Rain, April Shower, Yellow Shower, Pudding pipe tree,Indian Laburnum, Kanya pistula, Caña Pistula, Pistula ( Tagalog speaking provinces) Bistula ( some parts of Sorsogon and Visayan provinces) , Ibabau ( Visayan) among others. This flowering tree was probably introduced into the country at an early date, probably by traders or immigrants from Southeast Asia which may have brought the seeds of this tree during the pre-hispanic times. 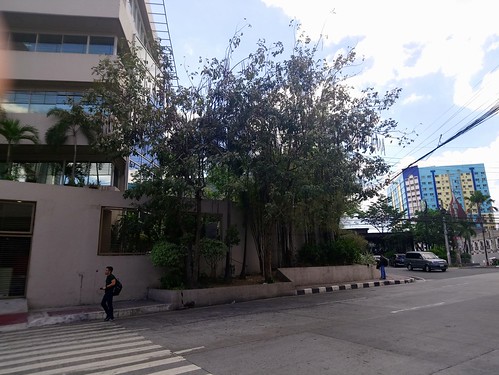 Cassia fistula was featured in the Flora de Filipinas book by Father Blanco. The flowering tree seems to be wide spread in many places that some local botanists would argue that it can be an indigenous species to the country. The flowers are normally pollinated by carpenter bees and even sun birds.

The species is native from Pakistan, Indian subcontinent and within southeast Asia.  Golden shower tree is a flowering plant in the family Fabaceae. 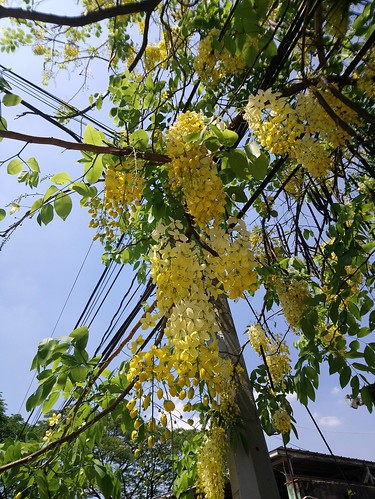 Cassia fistula is called Ratchaphruek by Thais and is  the national tree and flower of Thailand. It is also the state flower of Kerala in India and of immense importance among the country’s Malayali population. This popular ornamental plant is also used in herbal medicine. The tree is also used in the production of paper and source of wood.

The flower was also featured in Thai, Laos, Canada and Indian postage stamps. 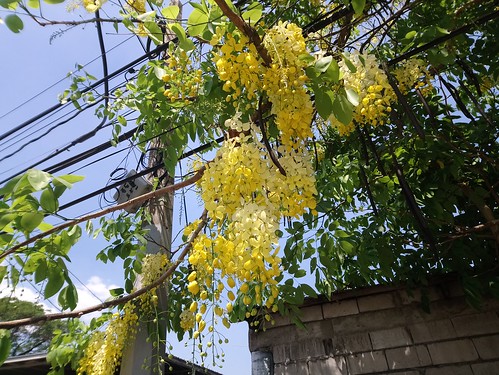 This tree is widely planted in many private subdivisions, community parks, Rizal park, intramuros, avenues, streets and cemeteries in many parts of the country. 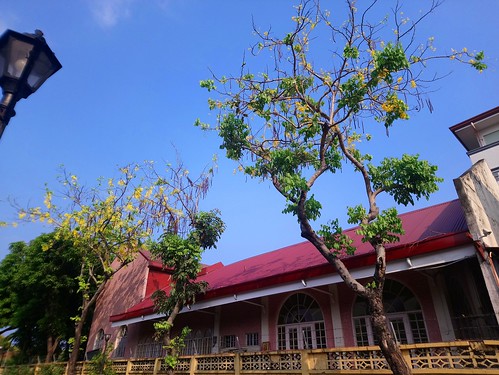 Cassia fistula along Muralla street, Intramuros, Manila at the back of (PLM) Shrine of Jesus the Divine Teacher

This serves as focal point in many landscape projects, street side and boulevards. Some people believes that it attracts positive energy and wish can be granted once the flowers opened freely. One must make a wish just after the stroke of midnight  during full moon. One must gather few flowers and keep them on a tissue paper or handkerchief for keepsake. 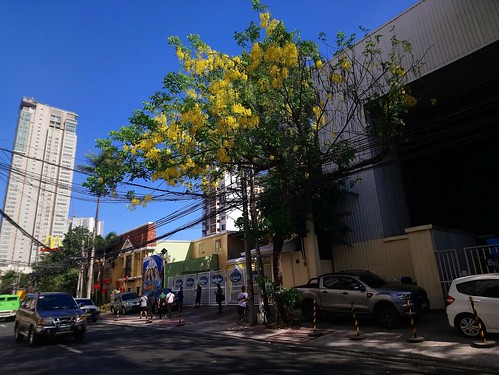 In Laos, The flower are called Dok Khoun– Some people attach the flower on their cars and motorbikes during Lao New Year with the same belief that it will bring them good luck, happiness and safety while driving.  Its yellow colored flowers brings good luck, freshness, remembrance, brings positivity, brings happiness,intellect, clarity, enlightenment, loyalty and joy. They are also planted in front yards of one’s home.

An artist from Rizal province also told me that they use to gather the seed pods and dry them for several weeks. Use them as musical instrument, the sound is like maracas. 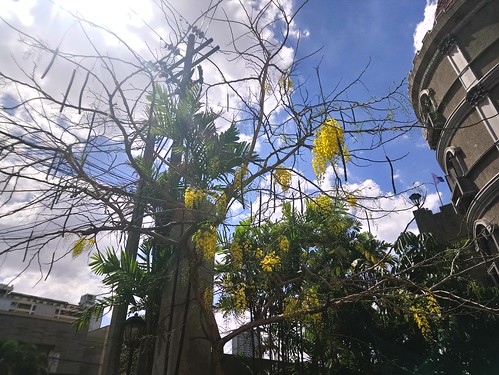 Another faith healer would use the seeds and rub them on skin on people that would visit her place. While a soothsayer in Quezon province (manghuhula ) would gather its seed pods and use the pods for fortune telling session. A peculiar ritual for the manghuhula is to gather seed pods during Mahal na Araw ( preferably during Good Friday )and have vesper ( orasyon) or magical incantation so that the seeds would have some potency to protect the owner. The seeds are sewn into a red cloth with markings, this are sometimes used as amulets to ward off evil intention or negative vibes.

Some us the leaves ( after pounding them ) seed pods are used as purgative, and extract from seed pods are used to alleviate constipation. The leaves are pounded and ground into a paste like consistency and are rubbed on ringworm ( an-an) and other fungal diseases.

Another urban story told to us by Mr. Carlos Valeriano Lazaro ( former president of POS and LBOS) state that whenever the April shower flowering season would appear. It mean that the rainy season is just few weeks away. 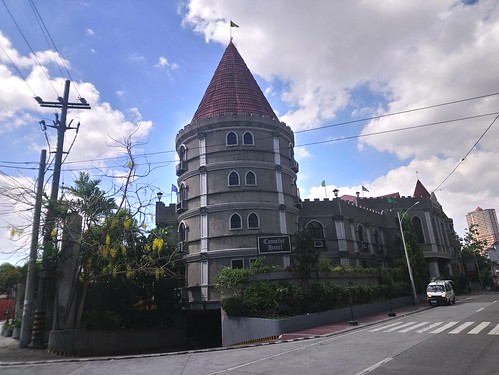 Cassia fistula can be propagated by seed and vegetatively through cuttings and air layering.  April shower or Golden Shower trees can grow between 10 meters to 25 meters in height.

The key is collecting the seeds when they are mature but not overripe ( dark brown color). The best time to harvest the seed pod, Are the seed pods produce over last year’s blooming season.

The seeds germinate best when the days are long with extra hours of sunshine. Rinse the seeds in warm water to remove the dark pulp.

Try to plant each seed in its own gallon pot with drainage holes on the bottom. Fill the pots with lightweight, sterile medium. Sow the seeds 1 to 1.5 inch (2.5 cm to 3 cm) deep, then position the pots in a warm, indirect light condition.
Depending on the temperature condition, one can germinate the seedling between 3 weeks to about a month.
Propagating via seeds can be long process and can take between 3 to 5 years before it start blooming.
One can place the seedling on ground when the seedling reach at least 1 year, this will hasten the growth.

One must not forget to occasionally apply organic (compost) and inorganic fertilizer every two or three weeks interval.

Do not forget that regular pruning of this tree is needed before it get too tall. Enjoy the annual blooming by having a viewing party or photo session with the tree.

personal interview with the people

Error: Twitter did not respond. Please wait a few minutes and refresh this page.