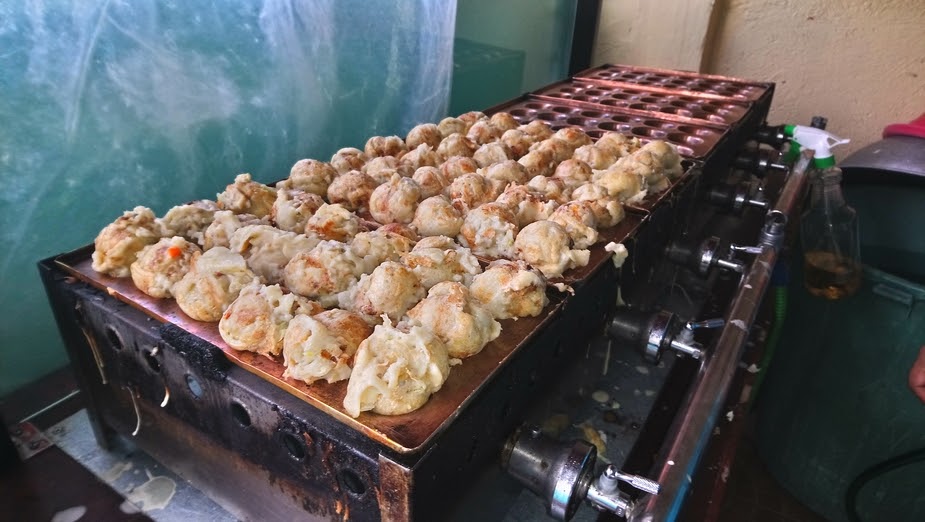 Goodwill Homes 1  community had several food stalls and restaurants. Business had been around for at least a decade and their customers came from many parts of the community to as far as General Luis street, Torres Village,Kingspoint Subdivision, San Pedro IX, Kasiyahan Village,California Village, Sierra Vista,Vista Verde even those living in Barangay Talipapa and Barangay Nagkaisang Nayon. We would make a point to buy some takoyaki at least once a week. They would have a generous toppings of mayonnaise, bonito flakes shavings and chili powder for the extra spice. The business came a long way since they already branched out to Susano road, Novaliches, Quezon City. 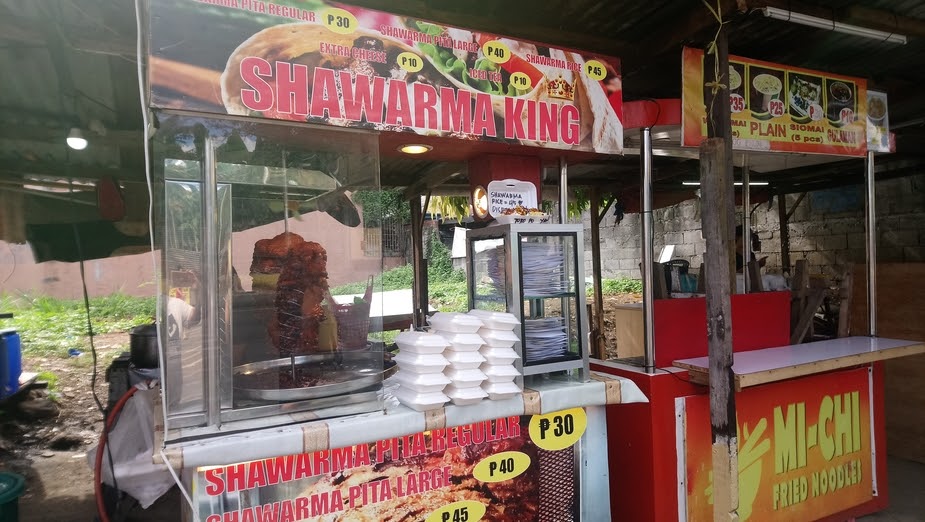 The food stalls beside Cherie’s Bakeshop about a month before the clearing operation by Goodwill Homes 1 and the barangay. 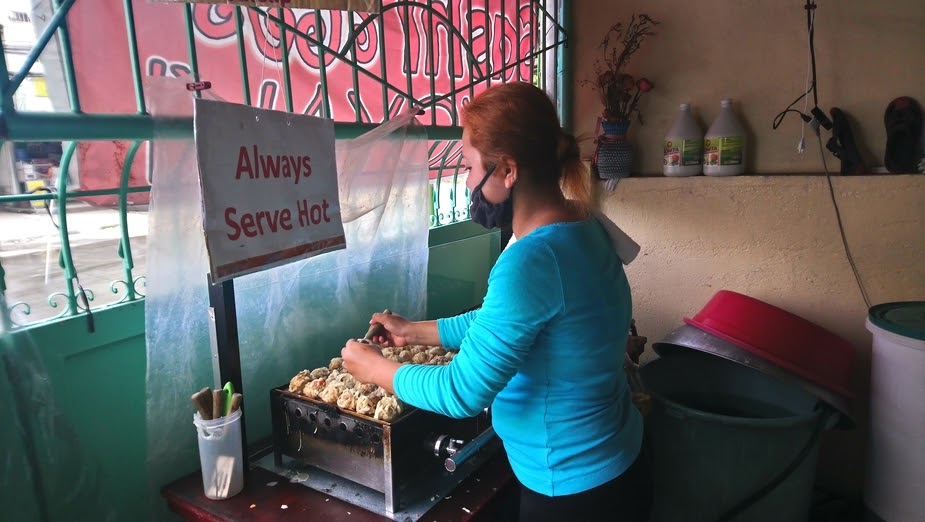 Since early part of January 2020, local community leaders even the barangay had been strict in clearing the sidewalks. Some of the most affected were the small stall owners. 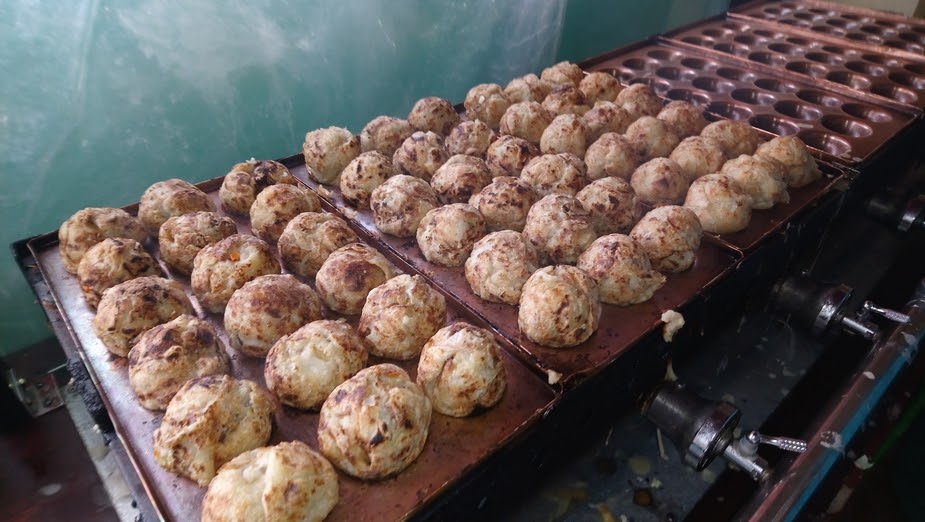 The proprietors of the stall were able to find a suitable place beside the Ocampo Bakery.  We will surely missed Shawarma King, Mi Chi Fried Noodles stalls which never reopened. 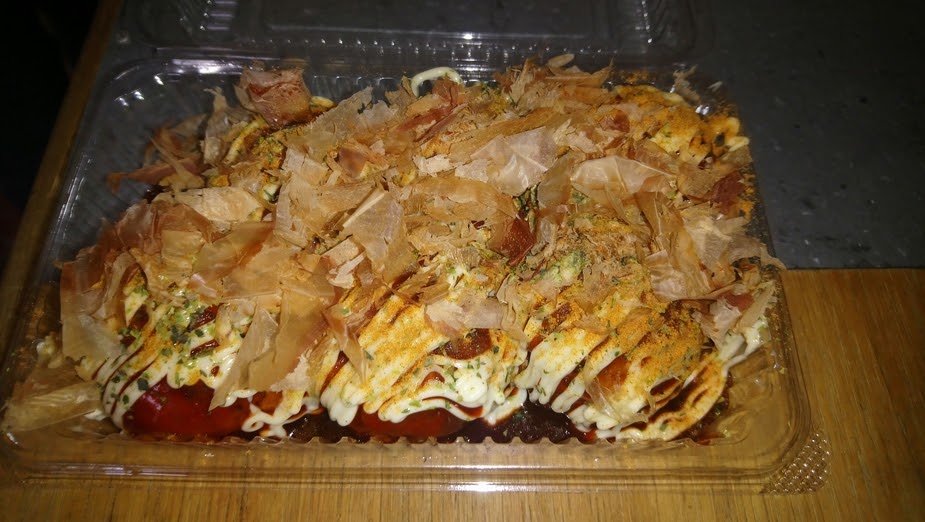 Among the celebrity customers includes comedian Pooh, Katrina Velarde and her friends, Maine Mendoza among others. 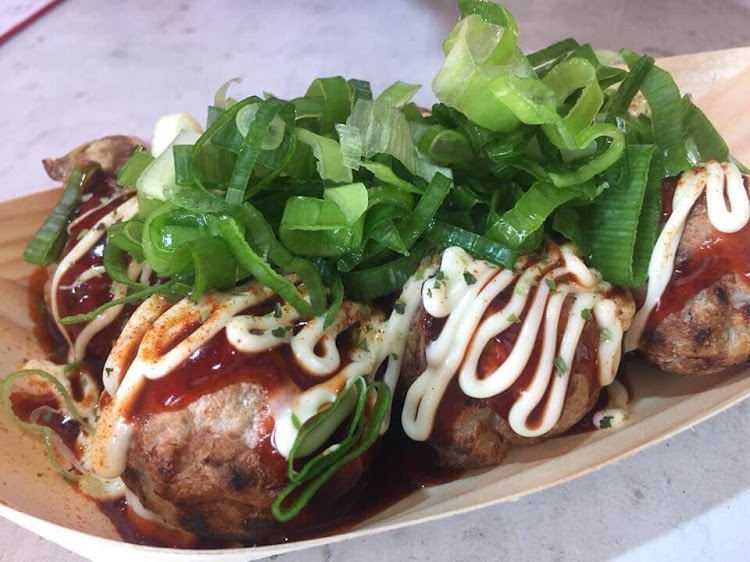 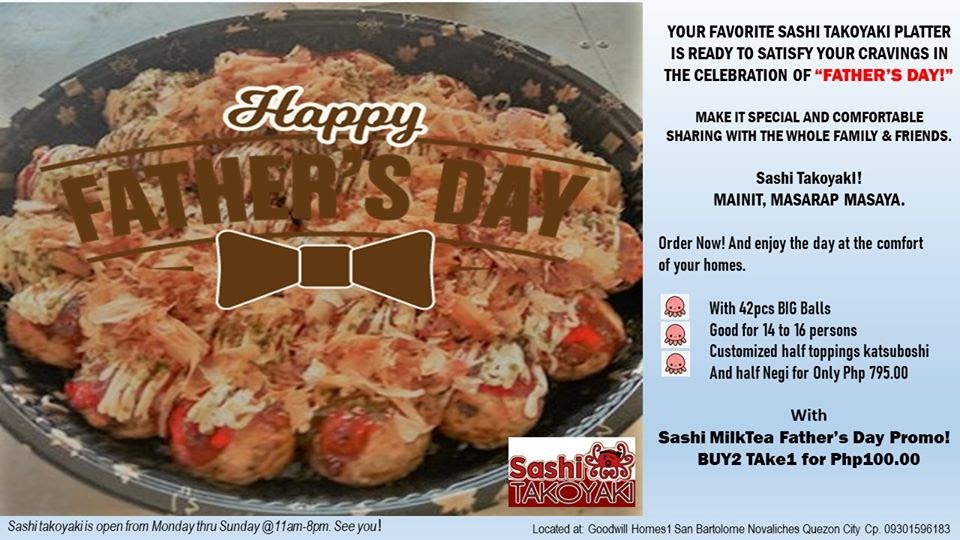 Sauyo market is located near Quirino Highway within Barangay Bagbag and near Barangay Sauyo in Novaliches, Quezon City. 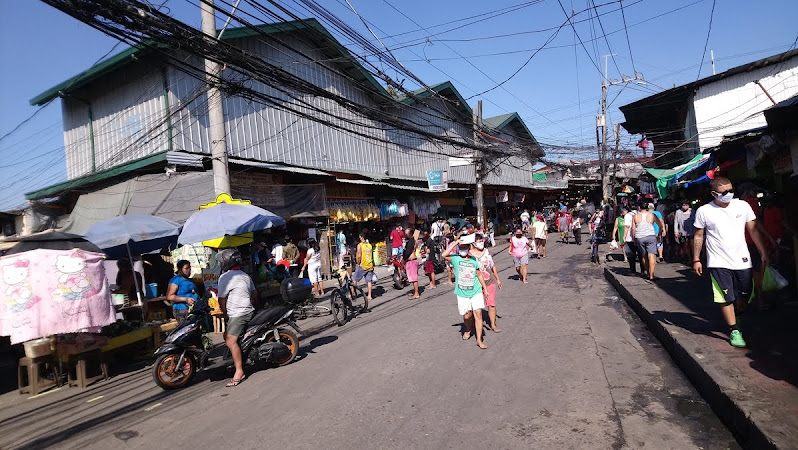 There is a public market which is accessible to the residents of West Fairview, Barangay Sauyo, Barangay Bagbag and Barangay Talipapa in Novaliches, Quezon City. 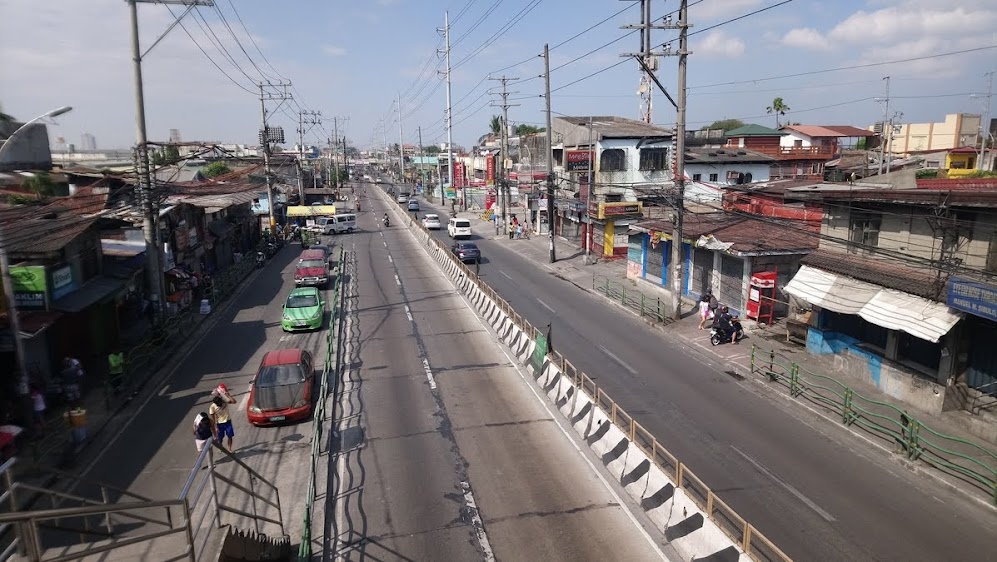 Quirino Highway is quite busy even on ordinary days but the traffic is just reduced to handful of vehicle which ply the main avenue. 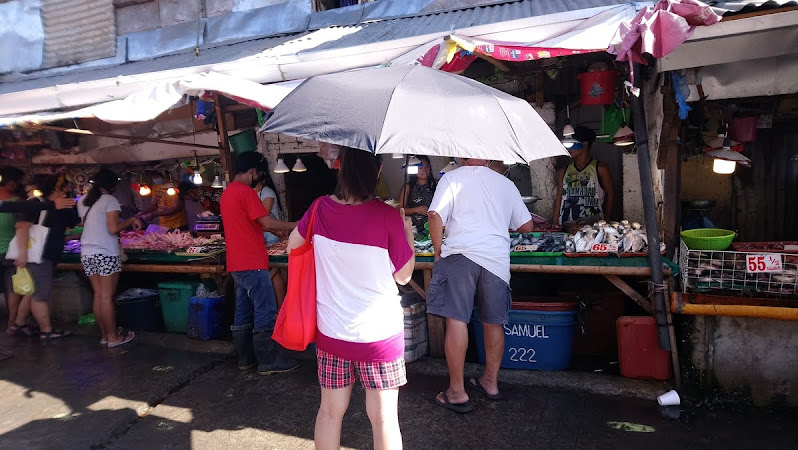 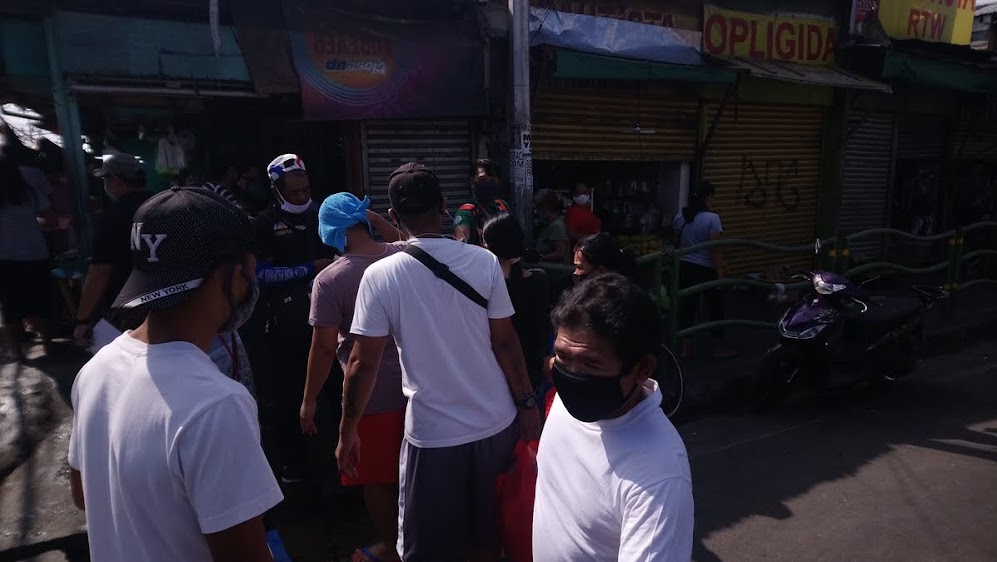 The market is normally jam pack on ordinary days since there were a lot of people buying wet, fresh produce and dry goods. 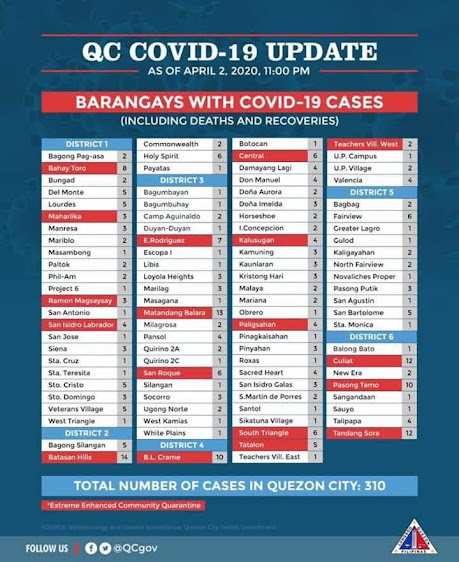 COVID 2019 cases in Quezon City as posted at their social media accounts as of April 2, 2020 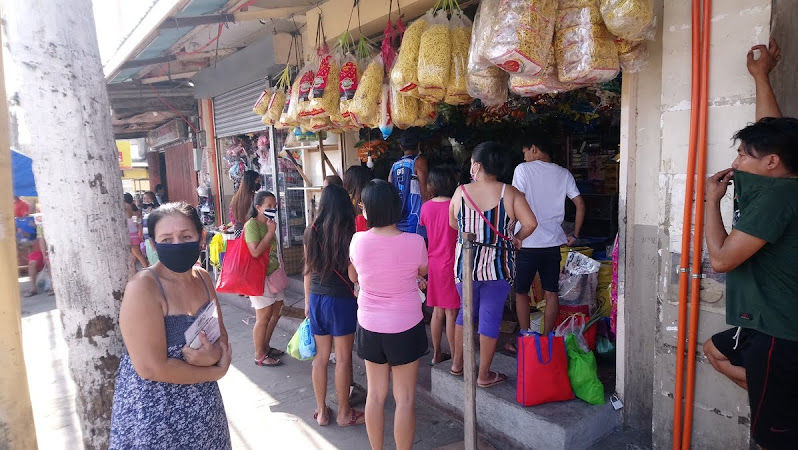 Social distancing is limited to just a mere 1 feet with people crowding on stalls which sells basic necessities like canned goods, biscuits, rice, powdered milk, sugar, coffee among others. 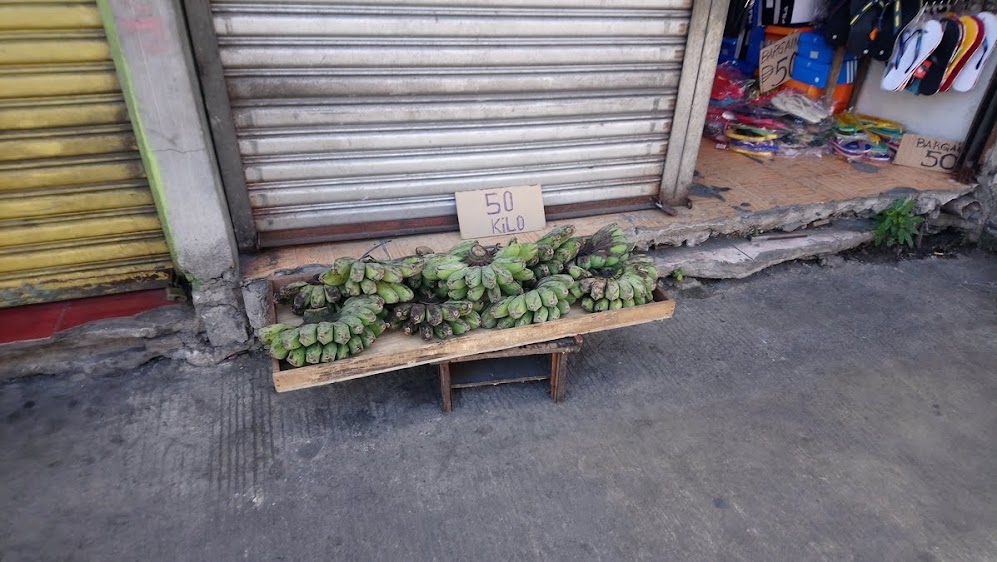 What we noticed is the slight increase in the price of saba banana. Saba banana is usually retailed per piece from Php 1.00 to Php 3.50 before the pre-COVID 2019 enhance community quarantine.  Is now sold for Php 50 per kilo just a couple of days ago.

Some people believed that eating 1 saba banana or banana will help them better immune system in order to fight the coronavirus. In fact i have posted 30 myths about coronavirus few weeks ago. 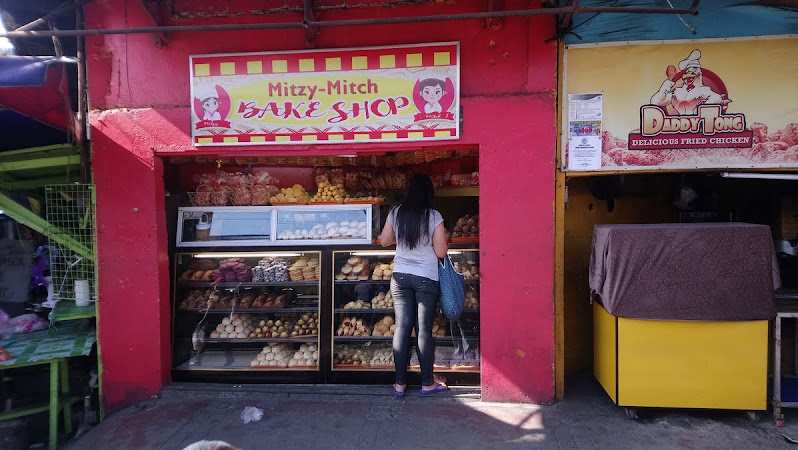 Local bakeries within Sauyo market still have a lot of baked pastries and local breads. But the seller told me that their stock of flour, milk, sugar and margarine which are the basic ingredients for making bread may not last for more than two weeks. 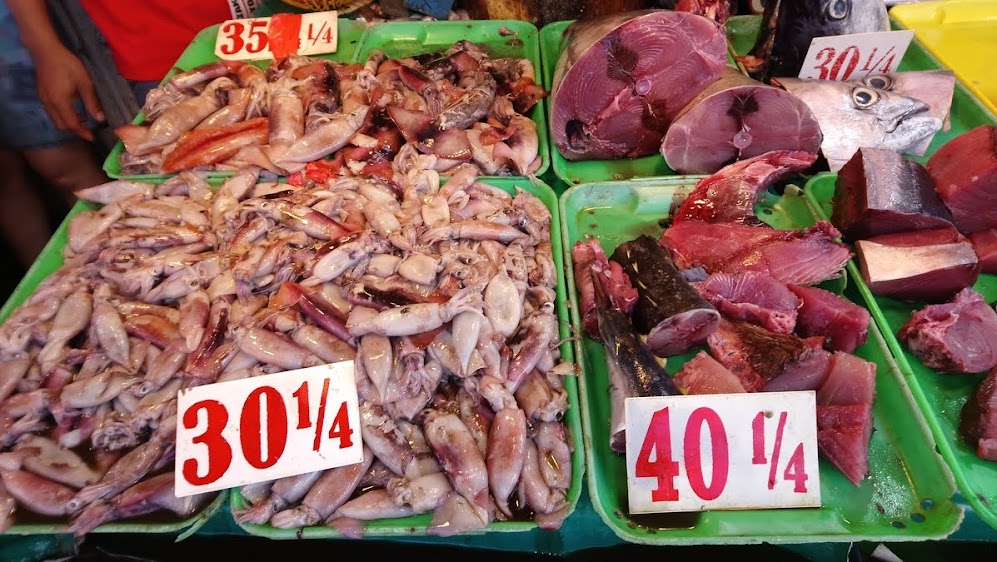 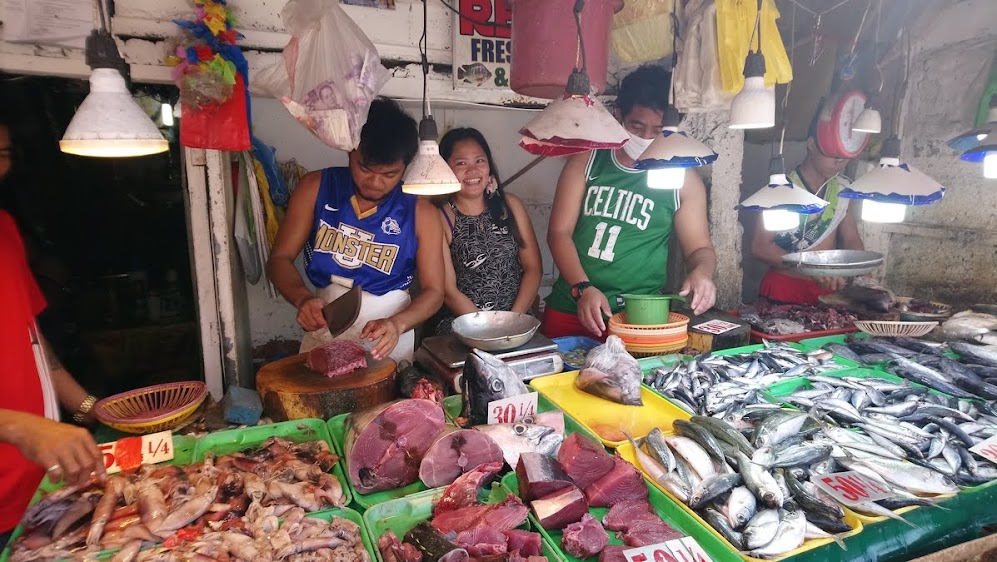 Despite the hardship that these vendors endure, they still managed to give smile. As they say there is a rainbow at the end of the tunnel.

Bestylog is a neighborhood food station which specializes on all morning value meals, chicken wing, hamburger, french fries, smoothies which opened their business a little over a year ago within Old Sauyo road in Barangay Talipapa, Novaliches, Quezon City.

The prices of their TAPSILOG meals, lomi and hamburger are affordable. Most of their customers are residents of Barangay Talipapa,Old Sauyo, Silvinia Village, Mindanao Avenue and Novaliches. 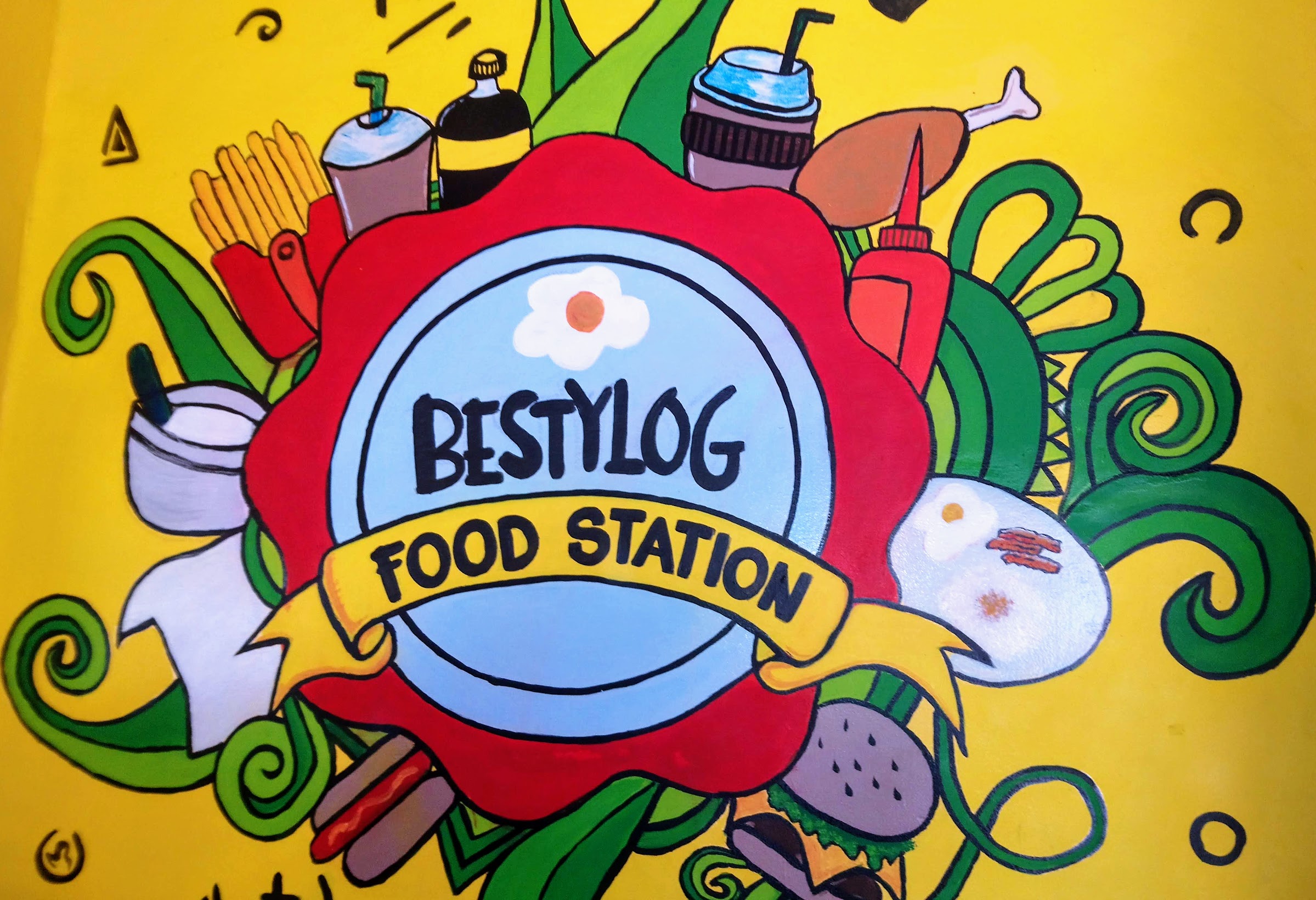 There were several private and public schools near the food station which also attracts additional customers during weekdays. Mr. Paulo Ortega, a resident of the barangay also told us that Bestylog would attract the mid-morning and late afternoon crowd. The food station sitting capacity is between 12 to 15 persons at any given time.

The menus were clearly posted and had a catchy names like hugot burger, bunwhich, oinksilog, Bes i am on a diet. 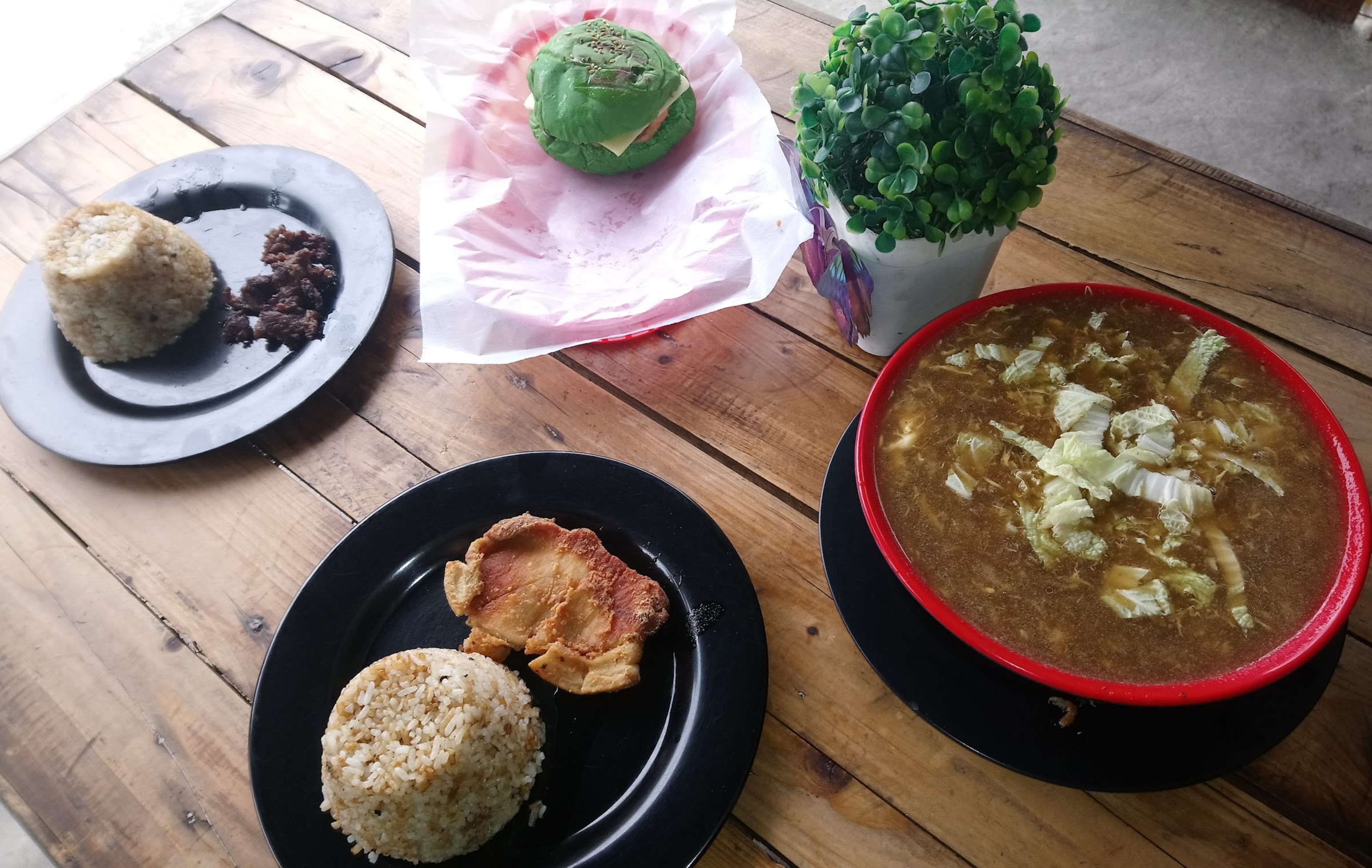 Bestylog bumwhich and hamburgers are colorful and the buns come in 5 colors, purple, green, yellow, pink and orange.

We tried to order almost everything on the menu, however not all meals were available which also includes their smoothies, milkshakes and fruit shakes. 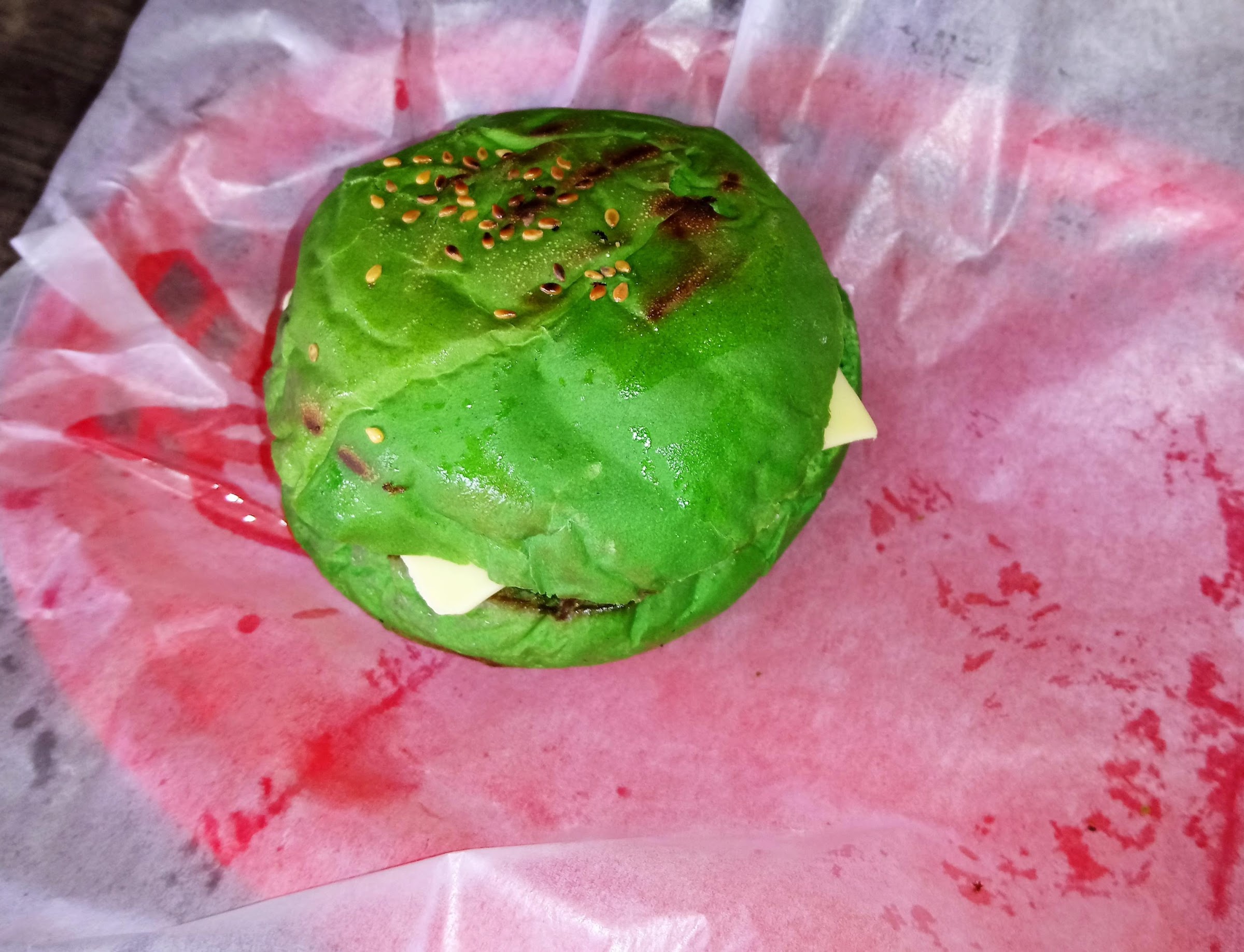 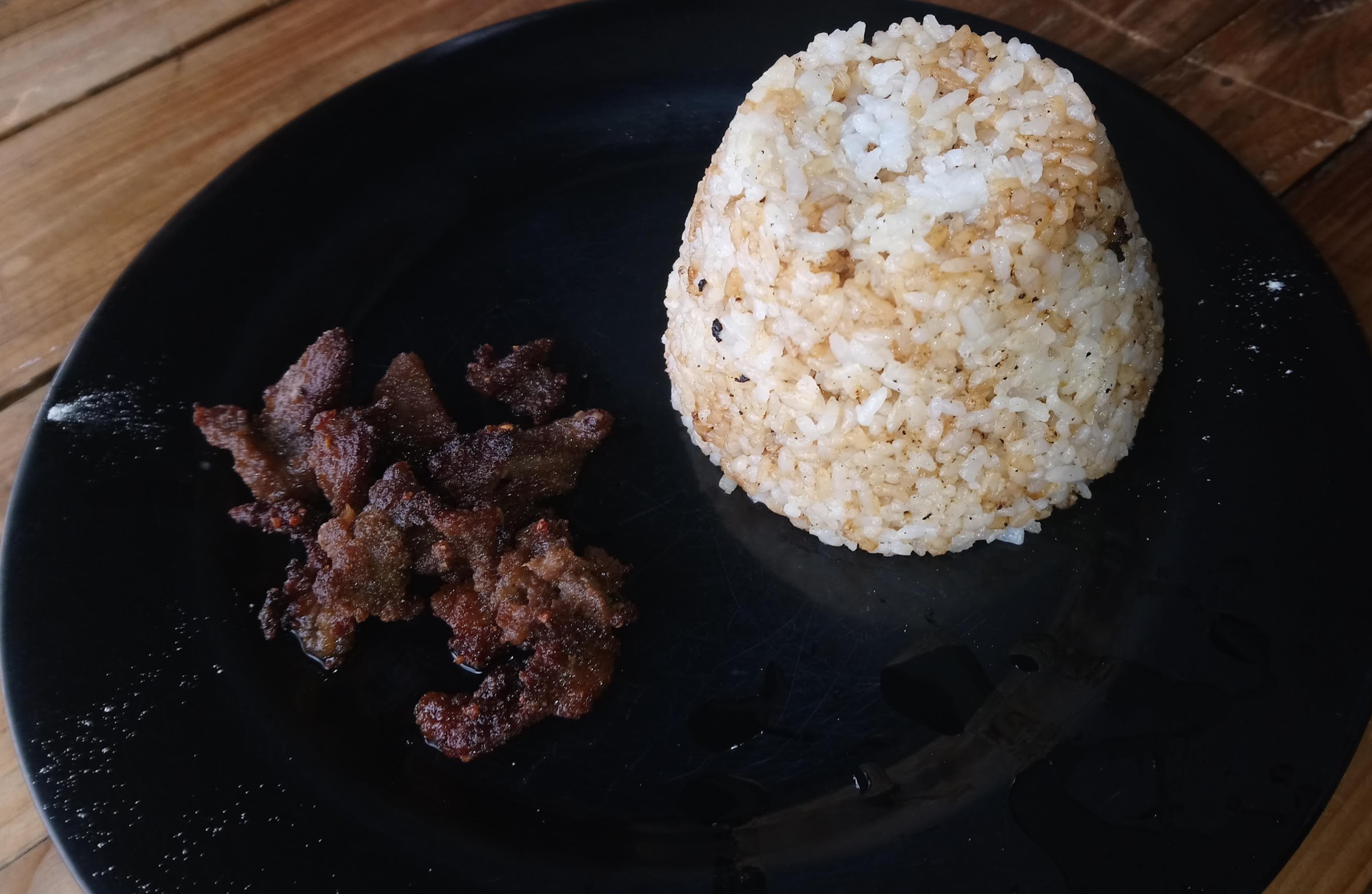 Beef tapa with fried rice- the beef is well marinated and tender, rice is pretty decent. One can have the option to not to order the egg. 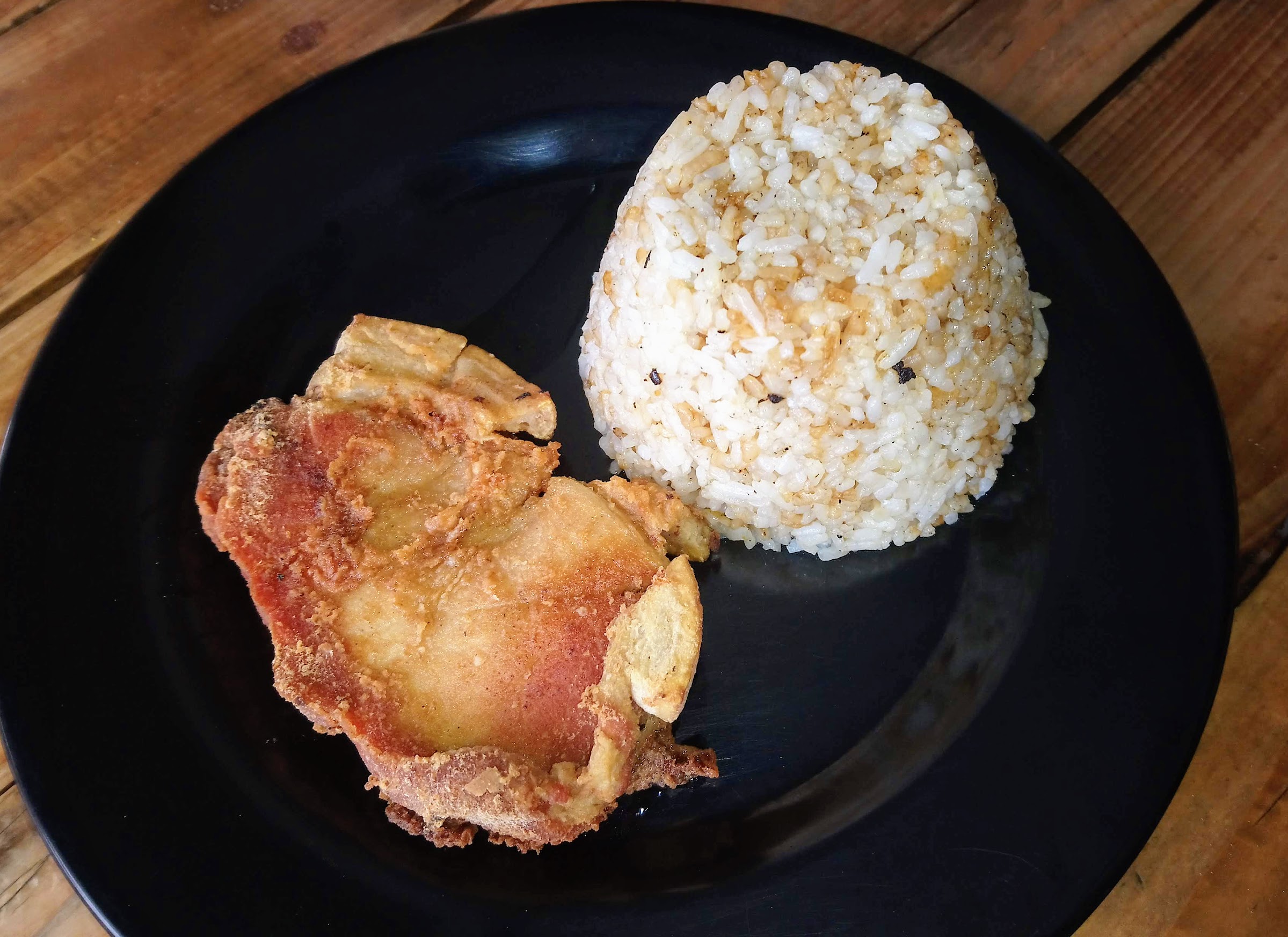 Pork chop is deep fried and crispy. One can have the option not to order the egg. 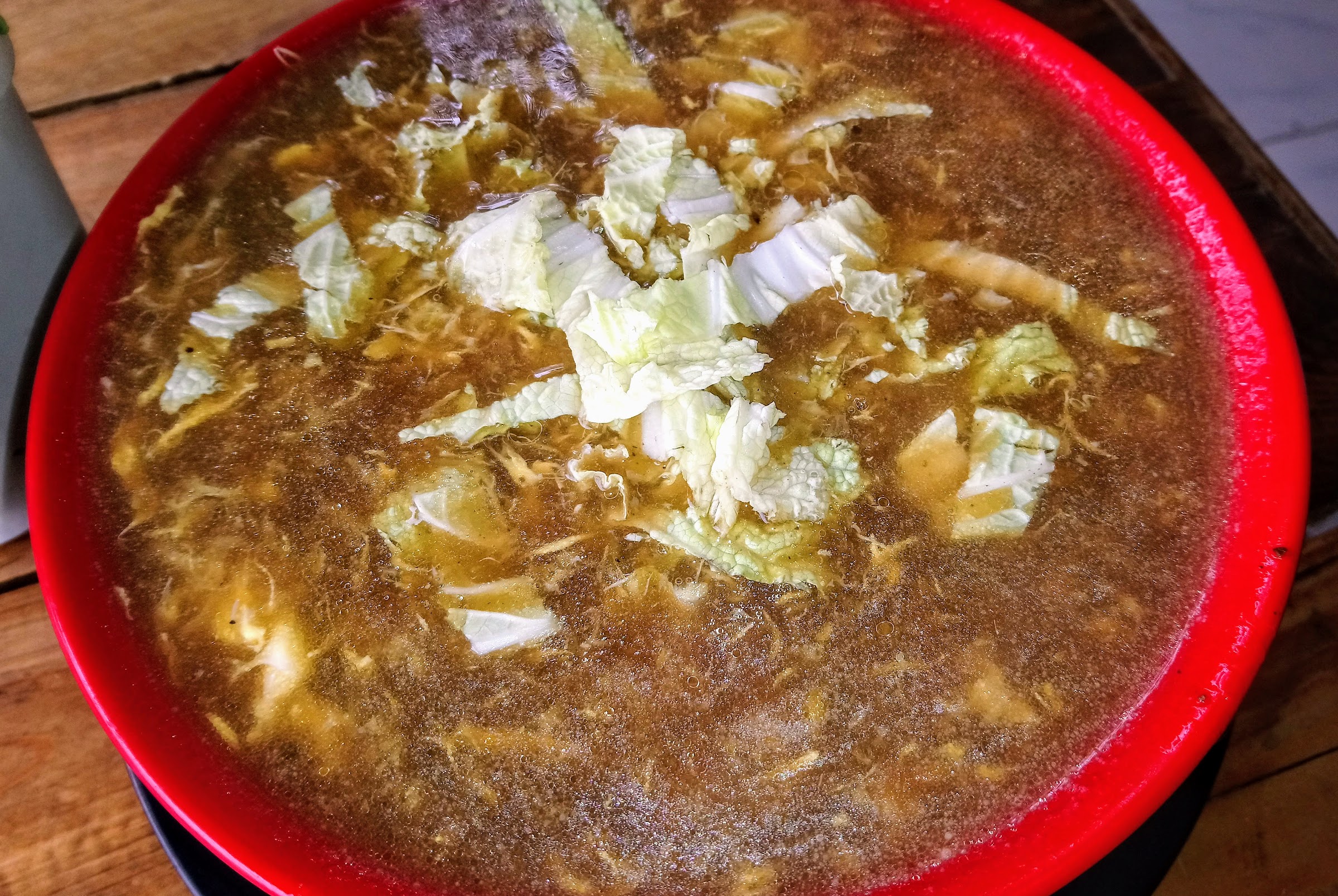 Lomi – We tried their version of lomi, It is good for sharing between 2 to 3 persons. It had noodles, beaten egg, kikiam, liver, meat, squid ball topped with Baguio pechay. One can add powdered pepper and calamansi to enhance the taste. The downturn of their lomi is a little bit salty.

We only paid a little over Php 180 for the entire meal. When you are within Old Sauyo road or Barangay Talipapa near Mindanao Avenue ( jeepney terminal of SM/ Trinoma- C-5/ Hortaleza Beauty Center) Do not forget to pay this food station a visit!

My two friends are always on a look out for some quirky items and kokeshi dolls. They would roam around Fairview, Novaliches in Quezon City and even up to North Caloocan just to purchase some of these pre-loved items, whenever they have some spare time.

There are a lot of these stores which carry items from Japan, South Korea or even United States. Demand for these items is growing because it had some cultural and collecting value. Although some people would advise them to be wary over these pre-loved items. Some might be posses by spirits by its former owners, Other would say that these might be the leftover items from Fukushima prefecture which can be highly radioactive.

There were at least a dozen known thrift stores along Quirino Highway, Novaliches which carry different items, some focuses more on clothes and shoes. TMRD is one of the bigger store which carries a wider selection of pre-loved items.

I personally think that this is a cheaper alternative for my friends to spend some time shopping and hunting for these items. They are not the party type people and seldom goes out together with their families.

My two friends already went to TMRD Japanese Surplus store several times to purchase some quirky items. The place is just one ride away from their house. The store is having their 4th anniversary sale which started late November and lasted until the end of December 31, 2018.

set of kokeshi dolls bought by my friends

There was an in-house raffle promo which was valid until the second week of December 2018. A customer get a raffle stub for every Php 1,000 pesos single purchase. My friends were able to buy some small kokeshi dolls but only managed to pay Php 250 for a couple of small items which included small cups. They agreed to come back and invited me to join at their buying trip since they have seen some folders and postcards. They also took some photos of the other kokeshi dolls which caught their fancy and asked the sales personnel ( tindera) about their prices. Vowing to come back few days after.

Kokeshi urban style – these two piece set was bought for just Php 70.00 a pair ( height about 5 inches or 13cm)

The first three dolls on the far left side was bought around December 10 at Php 130 or around $2.47 for all three items.

vintage sosaku kokeshi doll -might have been created in the mid- 1970’s or 1980’s . It had two smaller kokeshi dolls which gave the illusion of eyes.

We went to the store a few days after their last visit (December 12 Wednesday) around lunchtime. I started looking for some folders and postcards but the sales clerk told me that someone already bought the items. Much to the dismay of my two friends, when they found out that some of the kokeshi dolls they initially wanted. The prices had risen in just a matter of few days.

This pair of kokeshi sosaku style wooden dolls were priced at Php 50 a pair during December 10, 2018 visit, but became Php 100 when we visited the store. ( unknown origin)

Togatta kokeshi doll originally priced at Php 70.00 few days before, when the sales clerk told my friends that it was bargain at Php 150.00 (roughly $3.00) by the time we paid the cashier.

Togatta type kokeshi doll is 7 inches tall or 18 cm with signature at the bottom, by Kaiya Kichiemon (1905-1985) and probably made in the early 1970’s. The validation was thru the help of some kokeshi collectors like Mr. Henrick Stouten, Ms. Madelyn Molina and Ms. Nancy Togami who took time identifying the wooden doll.

The small kokeshi with signature was originally priced at Php 20.00 but became Php 60.00 when we visited the store. The wooden kokeshi doll is by Obata, Toshio (birth 1932) a Tsuchiyu doll stands about 3. 75 inches or about 10 centimeters.

Tsuchiyu is an onsen within 30 to 40 minutes away from Fukushima prefecture. The doll is one of the 11 known traditional types of doll in Japan.

This is the smallest kokeshi creative style which just stands 1.72 inches ( about 4.5 cm) by 1.75 inches height ( about 4.5 cm) with some chipped wooden hat due to age and handling.  This one was priced at Php 15 before but went up to Php 30 when we visited the store.

The group managed to haggle the price down for the two items from Php 60 to Php 30 and the small creative style kokeshi from Php 30 to Php 20.00. But for the other three kokeshi dolls, the sales clerk remain firm.  They paid Php 300 ( $5.70) for all these 5 items.

This makes us wonder why the store change their prices, We cannot help to tell the security guard and sales clerk that we notice the sudden change.  It was a bitter sweet deal that we got at the store.  If not of the sudden change, my friends could have paid Php 155.00.

The author was invited by a friend who lives within Barangay Talipapa in Novaliches, Quezon City.

Both husband and wife tandem are collectors and sellers of some vintage stuffs. Some of their haul are from Japan , United States, South Korea, Taiwan and some Southeast Asian countries.

some of the miniature bottles does not have any content

They gladly showed me some of their miniature liquor, beer and soft drink  bottle collection. They have more than 30 miniature bottles. Some were still unopened and in almost mint condition.

a few still have corkscrew

Some of their visitors sometimes would randomly open their miniature liquor bottle collection and drink the content out of it.  They would put padlock to secure their collection.

It took them several years to gradually built-up their collection and They were able to collect some miniature soft drink bottles from coca-cola.

According to the husband and wife tandem which collects miniature bottles, It is not easy to maintain a collection. Some over eager visitors would take them home as souvenirs. But they will still try to maintain their collection as long as they are happy and people visiting their house appreciates them.